There's just something about pumpkins that remind me of fall. It's probably because they're typically in season around this time, and who doesn't love carving a pumpkin and then making some delicious food with pumpkins? Pumpkins are everywhere when Autumn hits, and you can't go to a grocery store or farmer's market without seeing them. 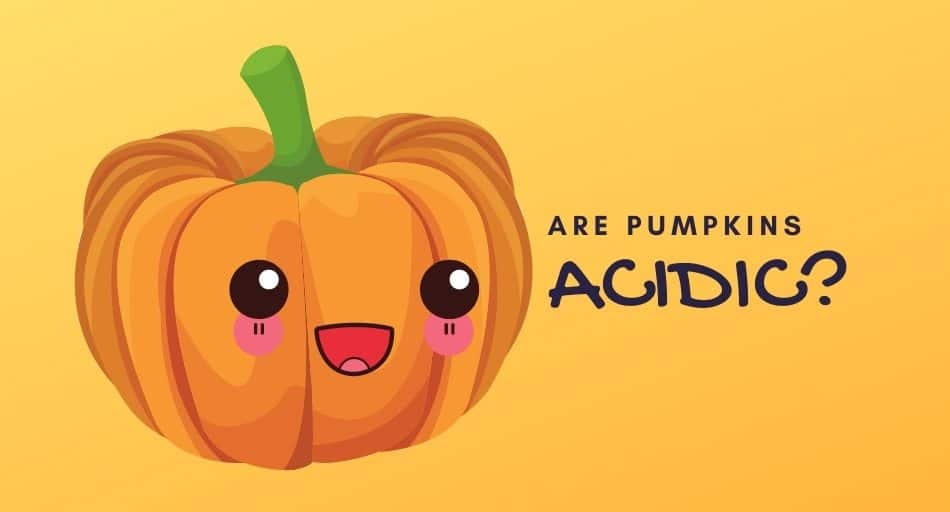 When you're watching the amount of acidic food you're eating, whether for general health or because you have acid reflux, you may be wondering, is pumpkin acidic?

Pumpkins are acidic. These orange fruits, yes, pumpkins are a fruit, have an acidic pH. The pH of pumpkins tends to be about 4.9, making it somewhat acidic, but it could be worse. Most of us eat pumpkin in a dessert form, so it's hard to imagine that the sweet pumpkin products we eat could be acidic, but they are.

As with most foods, just because they're acidic doesn't mean they're terrible for us. Everything in moderation is perfectly fine.

I don't know about you, but when I eat pumpkin or pumpkin-flavored things, they're usually in a dessert or coffee. So for me, how I eat pumpkin may not be the healthiest. But pumpkins as fruit are surprisingly good for you.

Pumpkins are very nutritious and rich in several vitamins and minerals that our bodies need. One cup of pumpkin only has 49 calories and less than a gram of fat, making it a great low-calorie food to add to your diet. Pumpkin is packed with manganese, copper, potassium, vitamin C and is exceptionally high in vitamin A.

As with a lot of other fruits and veggies, pumpkins are rich in antioxidants. Consuming plenty of antioxidants can help your body in a number of ways. One of the ways it helps is by reducing the amount of oxidative stress in your body. Too much oxidative stress can lead to several different chronic diseases, such as certain cancers and heart disease.

Eyesight tends to get worse as we age, but eating pumpkin or other foods high in vitamin A may preserve your vision for longer.

One of the best parts of carving a pumpkin during Halloween is taking all the seeds out and making a tasty treat. You can roast these seeds with a variety of seasonings to make a delicious snack or topping for salads or other meals. Since pumpkins and pumpkin seed oil are acidic, you're probably assuming that pumpkin seeds are acidic too.

To my surprise, pumpkin seeds are not acidic; they're alkaline. Well, they become alkaline once you've dried and roasted them. Since most people dry and roast the seeds anyway before eating them, eating pumpkin seeds are an excellent snack for those watching their acid intake or if you have acid reflux.

Where Are Pumpkins Native to?

Pumpkins are native to the continent of North America, specifically Central America and Mexico. Even though this is where pumpkins originate, pumpkins are now grown on all continents, minus Antarctica.

What Country Produces the Mots Pumpkins?

Even though pumpkins are native to Mexico and Central America, they are no longer the leading producer of this fruit in the world. Coming in first place for pumpkin production is China, with 7.8 million tons per year. India comes in second with about 5 million tons per year and in third place is Russia with 1.2 million tons annually.

If you're anything like me, you've only eaten pumpkin in desserts for the most part. If you're looking for savory ways to eat pumpkin and get all those nutrients without the extra sugar, here are a few ideas.

Do you love chili on a chilly fall day? One of the best ways to incorporate pumpkin into a savory dish is to add pumpkin to your favorite chili recipe.

All you have to do is cut up the pumpkin, cook it so it's soft, and when you season your chili with flavor, the pumpkin will take on a savory flavor that adds something you didn't even know you were missing from your chili.

I prefer Italian seasonings and garlic, and then stuff the ravioli, cook, and then serve. You can eat these with a white or red sauce. Either way, it's worth a try.

Stirfry is the easiest way to get several servings of veggies at once. Next time you make your favorite stirfry, just ad some cut-up pumpkin to it. I promise you won't regret it.