Celery seed is a spice that gives dishes a strong celery flavor, a nutty, earthy, slightly bitter taste, a satisfying crunch, and a burst of freshness. It offers a unique taste, but a celery seed substitute can come pretty close. 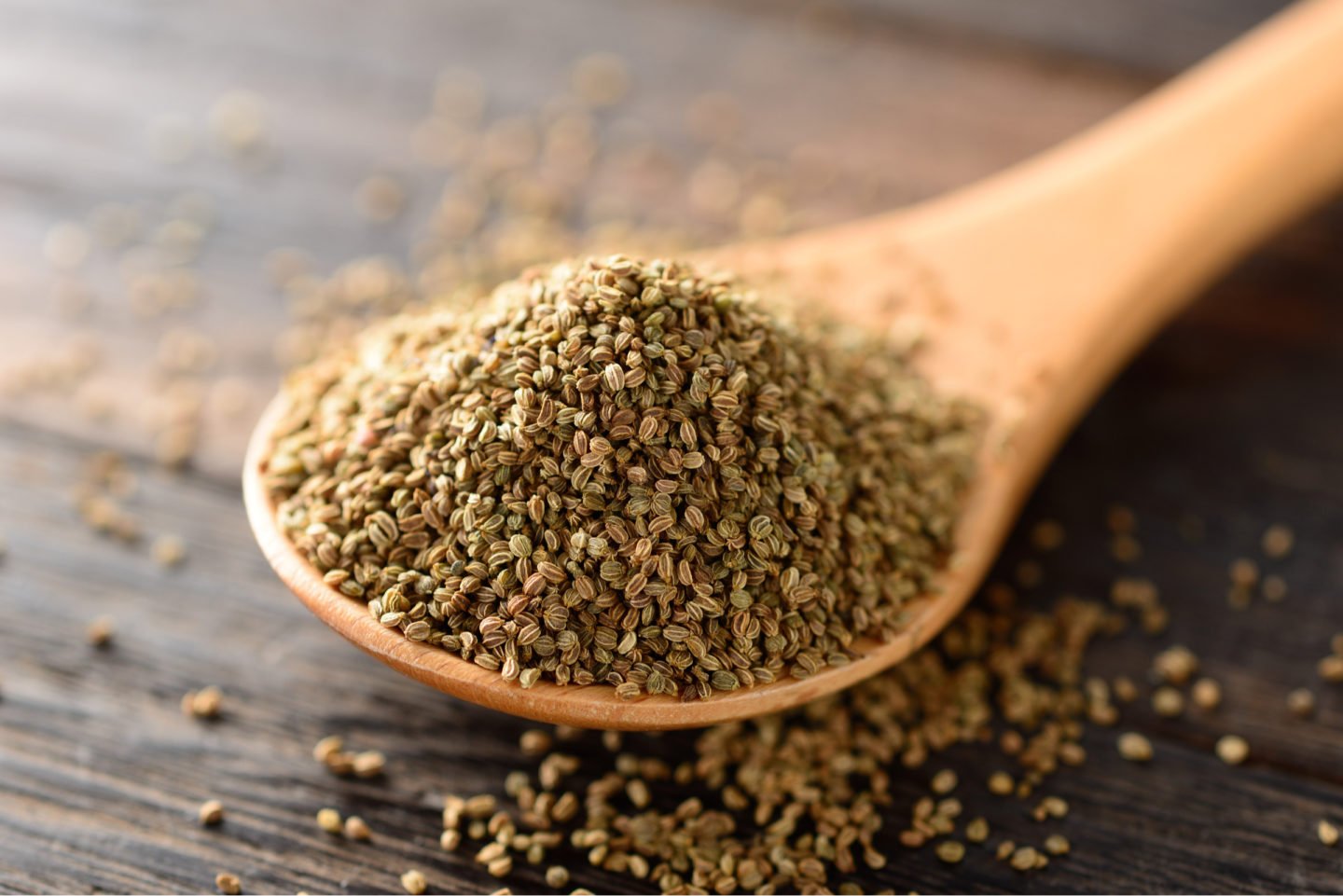 Celery seeds play an important role in many recipes, but they can sometimes be hard to find. If you need a celery seed substitute, you can choose from fresh celery, celery salt, dried celery flakes, fresh dill, parsley, and star anise. Or, you can also use the following seeds instead of celery seeds: dill seed, caraway seed, fennel seed, Nigella sativa seed, lovage seed, and coriander seed.

Make sure to choose the right substitute for the dish you’re making since not all celery seed alternatives are suitable for all dishes.

Fresh celery comes close to celery seed in terms of flavor and aroma, making it the best celery seed substitute. Celery seed and celery have a similar smell and taste, but that’s where their similarities end. The fresh celery leaf and stalk are bulky and have a fibrous texture, unlike the small size and crunchy texture of celery seed.

For this reason, you will need to finely chop the celery leaves and stalks if you wish to use them in place of celery seeds. As long as you do so, you can substitute celery seed with celery in almost any dish that calls for it.

However, note that celery seed has a stronger flavor than fresh celery. So, you will need to use 2 tablespoons of finely chopped celery leaves and celery ribs for each ½ teaspoon of celery seed required in the recipe.

Celery salt is best used as a celery seasoning in liquid recipes such as soups, casseroles, stews, and sauces. Still, you can also use it to season seafood, coleslaw, chicken salad, potato salad, and sausages.

Made from dried celery leaves and stalks that are crumbled into small pieces, celery flakes can be used in cooking or consumed as is. They have a stronger flavor than fresh celery, making celery flakes an even better substitute for celery seed.

You can add dried celery flakes to curry, casseroles, soups, salads, stir-fries, and even sauces. Celery flakes work best in dishes that need a long cooking time, where they can impart more of their flavor. Use 3 teaspoons of celery flakes for every teaspoon of celery seed required.

Dill seed is one of the best celery seed substitutes available. It has a mild, earthy, peppery flavor and a crunchy texture similar to celery seed. However, they don’t look alike. Dill seed has a wide, flat shape, while celery seed is compact and oblong.

Still, despite the difference in appearance, you can use dill seed instead of celery seed in salads, dressings, seafood, meats, and bread. Furthermore, dill seeds do especially well as a celery seed substitute in pickles.

When using dill seed to replace celery seed, follow a 1:1 ratio. For instance, if the recipe calls for 1 teaspoon of celery seed, use 1 teaspoon of dill seed instead. Note that dill seeds impart more aroma and flavor when heated, so you might want to try toasting yours before using them.

If you do not have its seeds, you can also use fresh dill as a celery seed substitute. Like dill seeds, fresh dill has a similar flavor as celery seed, except it has a slight grassiness.

In contrast with dill seed, dill weed loses more of its flavor and aroma the longer it is cooked. It turns less fragrant and acquires a bitter taste. Hence, it’s best added at the last minute of cooking.

Caraway seed is another excellent celery seed substitute that provides a burst of flavor when used. It has a nutty, slightly bitter taste similar to celery seeds and a slightly crunchy texture.  They have a similar dark color, but caraway seeds are longer than celery seeds.

You can use caraway seed as a celery seed substitute in coleslaw, soups, salads, sausages, curry, and meat rubs. It will also do well in similar recipes where celery seed is used for its earthy flavor. However, note that caraway contains hints of anise, which might not work for some dishes.

Fennel seed has a warm, sweet, and savory flavor. It tastes more like star anise than celery seed, but you can still use it as a celery seed substitute. Although they don’t match in flavor, fennel seed has the same crunch as celery seed, making sure the texture of the dish remains consistent when using it as a replacement.

You can substitute fennel seed for celery seed in casseroles, stews, soups, curries, barbecue marinades, some pickles, and some salads. Fennel seed is also highly aromatic; you’ll be able to smell the licorice flavor when you add it to your food.

Nigella seed, also known as black cumin, black seed, or kalonji, is another effective celery seed substitute. It comes from the Nigella sativa flower, sometimes called the "fennel flower," which leads to some confusing it with true fennel. However, Nigella sativa seeds and fennel seeds taste completely different.

The nigella seed has a slightly nutty, bitter flavor with hints of onion and oregano and a strong aroma. You can substitute celery seed with nigella seed in coleslaw, soups, stews, curries, sauces, bread, and pastries. Nigella seeds have a black color and a teardrop shape, but they won’t change the appearance of your dish too much.

Lovage, sometimes called wild celery, belongs to the same family as celery. It looks, tastes, and smells just like celery and will serve as an excellent celery substitute if you can find it. Hence, it follows that lovage seed is an amazing celery seed substitute.

You can use lovage seeds whole or ground in sauces, salad dressings, dry rubs, bread, and pickling liquids. Meanwhile, its leaves and stems can be used in soups, stews, and salads to add a celery-like flavor. However, note that lovage seed has a slight bitterness and hints of anise and lemon, unlike celery seed. It isn’t overpowering, but it may affect the taste of your dish if you plan to use a lot of it.

Coriander seed is another good celery seed substitute. It has a warm, nutty, earthy flavor similar to celery and the same crunchy texture as celery seed. It’s also deliciously fragrant, smelling slightly sweet and citrusy. Appearance-wise, however, coriander seeds are rounder and a little larger than celery seeds.

You can substitute coriander for celery seed in pickles, curries, stews, marinades, and spice mixes. Or you can also replace celery seed with coriander leaves (cilantro) in salads, soups, and stir-fries if you don't have the seeds.

You will need 1 teaspoon of coriander seeds to replace each teaspoon of celery seeds called for in the recipe.

Parsley belongs to the same family as celery, so although it isn’t a seed or a celery variety, you can use it as a celery seed substitute. It has a bright, peppery, and slightly bitter taste with a hint of earthiness that resembles celery.

It may not have the strong flavor of cooked celery, but parsley can work perfectly as a substitute for celery seed in soups, stocks, sauces, and some salads. However, some may find its taste too bitter or oily. If you need an herbal flavor, then parsley will do.

If you wish to use it as a celery seed alternative, replace each teaspoon of celery seed with 3 tablespoons of chopped parsley.

Star anise is another readily available celery seed substitute. It has a pungent, mildly sweet, licorice-like taste favored in Chinese cuisine. With a unique appearance, it resembles a star with six to eight points that each contains a tiny seed.

Star anise is mainly used in savory dishes, but it can also be used in baking and making tea. Whole, you can best use it in liquid recipes to flavor soups, stews, and braising broths. Note that you must remove whole star anise before serving your dish. So, if you need to use it in other recipes, you must first grind it.

See below the best celery seed substitutes to use when cooking. Look at the notes for information on substitution tips, differences in flavor profile, and recommendations for improving taste.

What is celery seed, and how is it used?

A celery seed is a small, slightly bitter seed that comes from the wild celery plant. Celery seed is mainly used as a spice and is available in two forms: whole and ground.

What are the main differences between celery seeds and celery?

Celery is a superfood veggie that has three kinds: stalk celery, celery root, and wild celery. When labeled as simply "celery," it often refers to the typical celery found in supermarkets: stalk celery or Pascal celery. On the other hand, celery seeds are tiny, slightly bitter seeds that come from wild celery.

In other words, celery is a veggie with fibrous stalks and leaves, while celery seeds are small, crunchy seeds often used as a spice.

Is celery seed the same as celery salt?

Can celery seeds be substituted for celery?

You can replace celery with celery seeds as they are arguably the best celery substitute.

How much celery seed equals a cup of celery?

One tablespoon of celery seed equals a cup of celery.

What are the health benefits of celery seed?

Does celery seed make you sleepy?

What are exotic celery seed substitutes for any dish?

The exotic celery seed substitutes in this list are caraway, nigella, and lovage. To replace celery seed with these exotic spices, simply use 1 teaspoon of caraway seeds, nigella seeds, or lovage seeds for every teaspoon of celery seed required in the recipe.