The most popular farm-raised fish in the world is the tilapia with an annual production estimated at one billion pounds. It is also a common seafood choice in the United States with the average American consuming 1.1 pounds of the fish per capita. Tilapia has gained popularity partly due to its price tag, which is relatively inexpensive. It is also an easy protein to cook, unlike many other types of seafood which can quickly turn dry if overcooked.

But what does the tilapia taste like? Is it worth buying if you see it on a restaurant menu or at your local supermarket? We've pulled together an in-depth guide which will show you the tilapia's taste, texture, how it compares to other fish, and how to use it in the kitchen. Let's dive in and take a look.

A tilapia fish is very mild in flavor and some would argue that it is virtually flavorless. However, it does have a slight sweetness similar to what you would get from a red snapper or striped bass. The raw fillets are a pinkish-white color and, once cooked, turn completely white. If the fish still has its skin on, then there is usually a darker layer of meat just below the skin. This meat is perfectly edible, but it is often removed if the fish has been filleted. The texture of a tilapia is lean and firm with a flaky texture.

Tilapias don't have a fishy flavor that you would attribute to anchovies or mackerel and they don't have the fattiness that you get from tuna or swordfish steaks. But it's this lack of flavor that makes it so popular in the United States. The fish can be used as a blank canvas and you don't have to worry about overwhelming its taste. Instead, it's perfect for slathering with spicy, flavor-packed sauces, herbs, and spices. 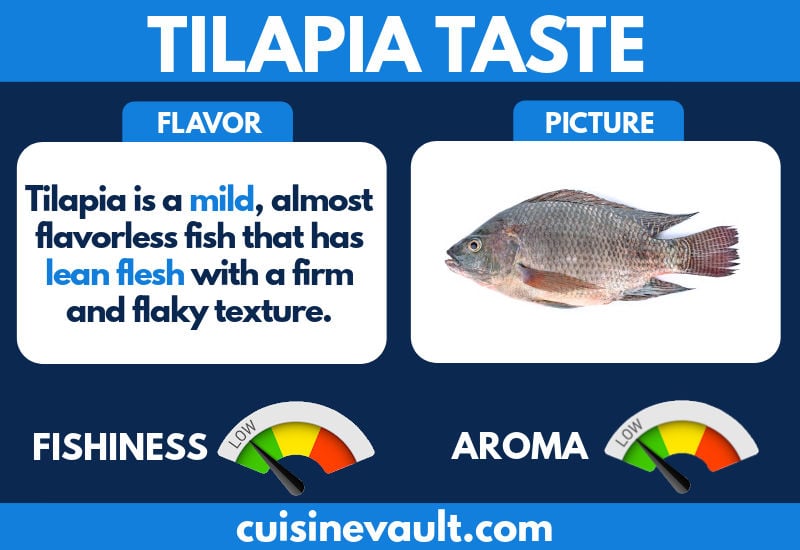 The tilapia is very mild in taste.

The taste of tilapia will vary depending on whether the fish is caught from the ocean wild or is a farmed aqua-culture variety. This fish will take on some flavor from its surroundings. Wild fish eat algae, resulting in a taste than can be unpleasant. However, even farmed tilapia will vary in taste depending on their source. The type of feed used and water quality will impact the flavors significantly.

Some people are unimpressed with tilapia, describing the fish as having a musty, earthy flavor. Some even describe it is as tasting like petrol! This issue can affect both wild and farmed fish and is the result of chemicals present in the surrounding water. Geosmin and 2-methyl-isoborneol result from microorganism growth in the water, which is usually prevalent in the warmer months. Studies have found that these chemicals can taint the fish's flavor, causing it to taste muddy and unpleasant. Thankfully, this problem isn't too common.

Summary of a tilapia’s flavor

What flavors work with tilapia?

Tilapia is a versatile fish that is relatively easy to cook for dinner. It can be baked, sautéed, panfried, steamed, broiled, or grilled. Although the skin can be removed before cooking, it is a good idea to leave it on and then remove before serving. When cooked skin side down, it protects the fish from excessive heat and stops the flesh from drying out.

Although tilapia will taste delicious in any recipe that calls for white fish, it is especially good in fish tacos, parmesan-crusted, or fried in batter and served with chips. Asian dishes such as stir-fries benefit from cubes of tilapia. For a simple meal, grill a fish with a sprinkle of salt and pepper, then dial up the flavor by adding sauce. HP, tartare, or parsley sauce are also excellent options.

Tip: tilapia is not suitable for eating raw so avoid using it in sushi or other recipes like ceviche where the fish is left uncooked.

Related reading:
What does an amberjack taste like?
What do sea bass taste of?
Is burbot good to eat?
What are the best hake substitutes?

How to choose the best tilapia

Choosing the best quality tilapia will make all the difference between an average or a great dish. If possible, buy a whole tilapia fresh from the market. If these aren't available in your area, then try to find fillets that haven't been frozen as their taste and texture won't be as good. 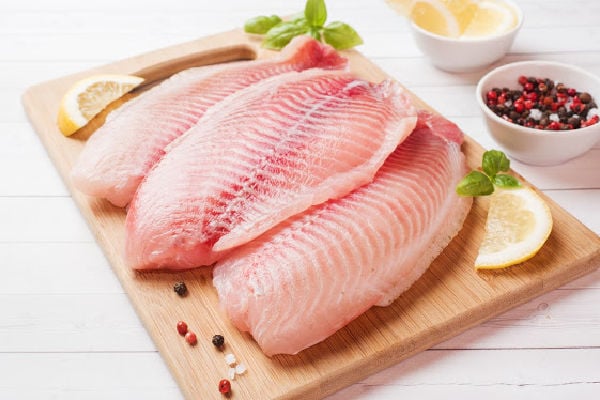 Hint: Sourcing sustainable and food-safe fish is important for a variety of reasons. We recommend visiting seafoodwatch to find out the best variety and farm location from which your fish should be coming from. 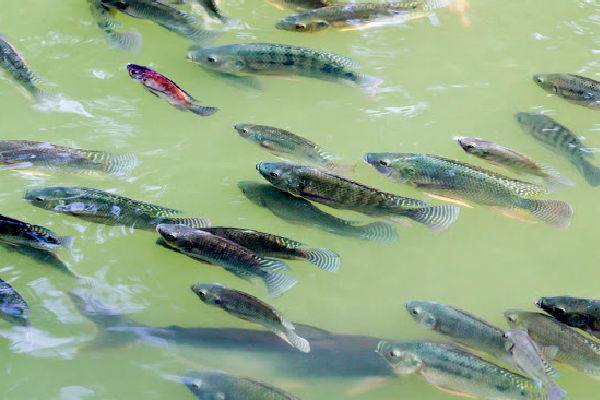 Farmed tilapia fish in a school.

Tilapia is a fish that is easy to find in supermarkets throughout the world. It is a divisive fish with some loving it and others loathing it. However, when eating a fresh, well-farmed fish, you will find that it has a pleasantly mild, slightly sweet flavor. The texture is also quite enjoyable, with a firm flake that works well in many dishes.

If you prefer powerful, pungent fish varieties like anchovies or sardines then tilapia may not be for you. Keep in mind that adding flavor-packed seasonings and sauces is a good option; unlike most other fish, tilapia is happy to play the supporting role on the plate.

What is your favorite farmed fish? Please let us know in the comments below and we'll be sure to review it if we haven't already.