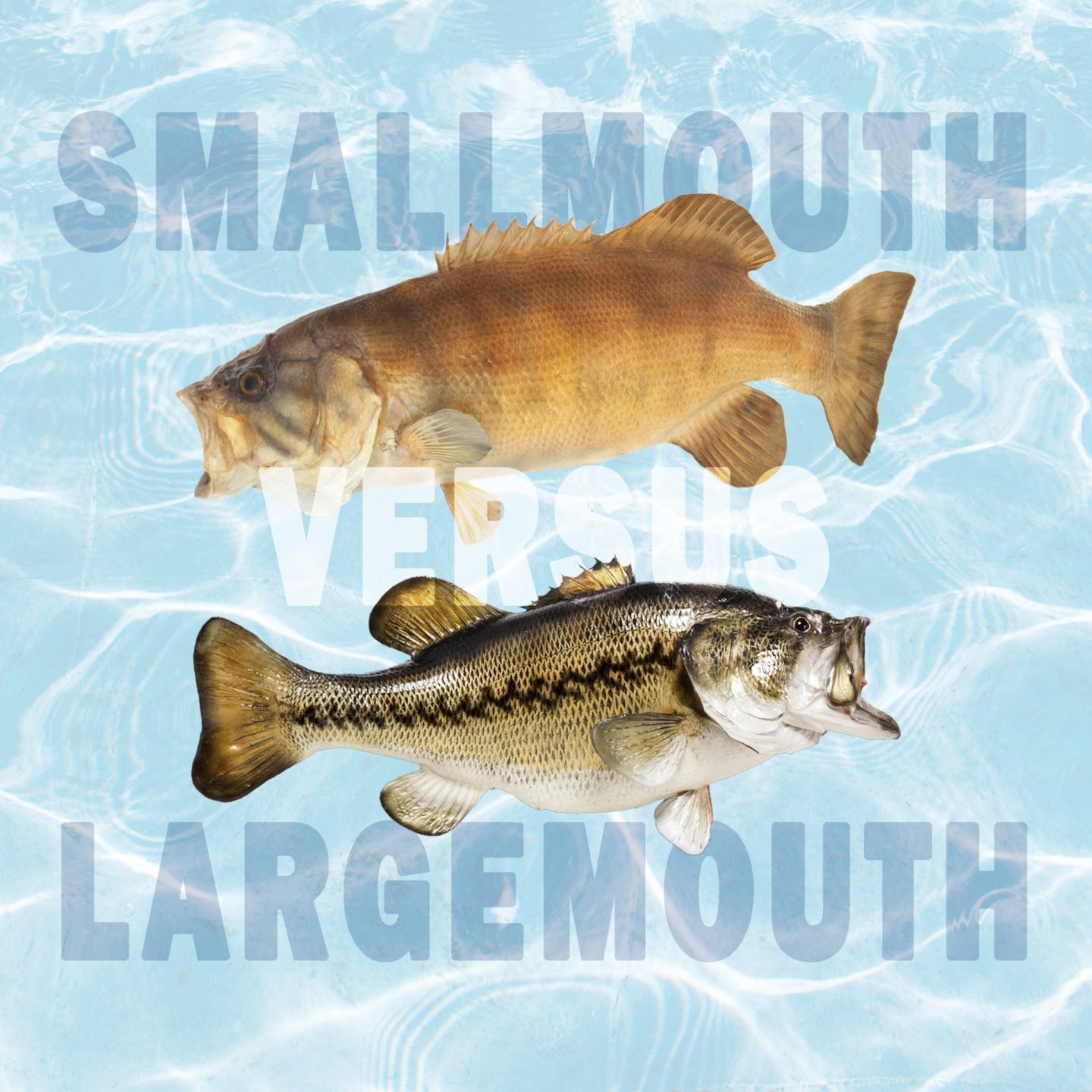 The smallmouth bass and largemouth bass are among the most popular sports fish among anglers in North America. They’re plentiful, a fair challenge, and (most of all) delicious with a squeeze of lemon. However, despite their popularity, not everyone knows the difference between smallmouth vs. largemouth bass.

The main difference between smallmouth vs. largemouth bass is in their size. While the length and weight of each fish species can vary, largemouth bass, on average, tends to be a few inches longer than smallmouth bass. Therefore, if you want to identify them positively, you may need to look a bit more closely.

We’ve broken down each fish, giving you all the info on size, appearance, flavor, texture, and price. Learn more about all the differences between largemouth and smallmouth bass here so that you can tell them apart.

Smallmouth bass and largemouth bass have a lot in common, so you need to know what to look for when trying to tell the difference between the two. So be sure to look out for all these signs when identifying them.

Perhaps, the most apparent difference between largemouth bass and smallmouth bass is their size. Of course, smallmouth bass are smaller, usually between 10 to 20 inches and under 10 lbs. However, anglers still occasionally have trouble netting them despite their smaller size, as they put up just as much of a fight as their larger counterparts.

While smallmouth bass tends to be smaller, this isn’t always the case, which makes it difficult to tell the two apart at first glance. Overall, the two are very similar in appearance, with green bodies, spiny fins, and wide mouths.

When telling the two apart, the first place to look at is the mouth. Smallmouth bass have mouths that extend only to their eyes.

You can also look at the dorsal fins on the back. These are connected among smallmouth bass. They also have a more brownish color, with vertical bands along their body.

Smallmouth bass live in the northeastern United States, extending through the midwest. They prefer rivers and streams with clear, fast-moving water or lakes with a rocky shoreline. They are most often found near rocks, weeds, and other debris, where they hunt.

Of the two fish species, smallmouth bass has a more avid following among diners. Where largemouth bass is a bit fishier, the smallmouth is lighter in flavor and a little bit sweet. So if you don’t like fishy fish, smallmouth bass may be the perfect choice for you.

The texture of the flesh is a bit finer than largemouth bass and is overall light and flaky.

Bass isn’t commonly sold in supermarkets or even fishmongers, though it’s not unheard of. Generally, you can expect to pay between $20 and $25 a pound for smallmouth bass.

Largemouth bass have their unique habits and characteristics compared to smallmouth bass. Look for all of these signs when trying to tell them apart.

While their size can vary, largemouth bass tend to be larger than smallmouth bass. These fish generally measure 20 to 30 inches in length and weigh over ten pounds on average. But don’t try to identify them based on size alone, as younger largemouth bass can be much smaller.

The appearance of Largemouth bass is similar to smallmouth bass in most ways, but there are a few key differences that can help you tell them apart. First is the mouth, which extends an inch or so past the eye. On smallmouth bass, the corner of the mouth only reaches the eye.

The color is the other most obvious difference. Largemouth bass have a brighter green color with horizontal stripes rather than vertical.

Largemouth bass can be found in many of the same rivers, streams, and lakes as smallmouth bass in the northeastern United States. However, they can also be found farther west, even as far as California. Unlike smallmouth bass, they prefer murky water where they hide.

Like all fish, largemouth bass’s flavor depends mainly on the water it swims in. Since they prefer murkier water than smallmouth bass, they have a more fishy flavor. While they aren’t as strong as many other freshwater fish species, some people don’t enjoy their taste.

Largemouth bass has all the light, flaky texture of smallmouth but is a bit coarser in texture. Like most larger fish, the grain of the meat comes apart in bigger flakes.

Largemouth bass have about the same prices as smallmouth bass, around $20 to $25 a pound when available. However, largemouth bass tend to give a bit more value for the money as they have a higher proportion of meat than non-edible parts.

Can You Substitute One for the Other?

Since these two fish species are so similar, they make excellent substitutions for one another. They both have a firm texture and relatively mild flavor, making them versatile in a range of different seafood dishes. They can also be substituted for common freshwater fish like trout and crappie.

Overall, largemouth bass tend to have a slightly fishier taste and may be better suited to dishes with bigger, bolder flavors. Since smallmouth bass is lighter and sweeter, many people prefer it lightly seasoned on the grill or pan-fried.

How to Cook Bass

Some larger bass are too big to be properly categorized as ‘panfish’ although, on average, smallmouth and largemouth bass fillets are the perfect sizes for pan-frying. There are many different ways to make a delicious meal of bass, but here’s a simple way for those less experienced with cooking the fish.

This recipe works best with fillets around half an inch thick and up to eight inches long. However, you can work with larger fillets by adding cook time.

Start by patting your fillets dry with a paper towel and then feeling along the edges of the meat for bones. The seller typically removes these, though some smaller ones are often left behind. You can remove them with a pair of tweezers or pliers or by cutting out the strip of meat they are located in.

2. Prepare your other ingredients.

This method of panfrying requires three bowls within easy reach of your hot pan. Fill each with the following:

When the bowls and the fish are ready, begin heating 2 tbs butter or oil in a medium pan.

It’s essential to work quickly and thoroughly, ensuring the fish are evenly coated with each ingredient before moving on. Once your oil is hot, dredge all of your fillets in the flour mixture and set them on a clean cutting board.

Once they are ready, take one fillet and coat it thoroughly in your beaten egg white by dipping it into the appropriate bowl. Make sure it is completely coated and allow the excess to drip off. Again, it’s best to use only one hand for this step, keeping your other hand dry.

Finally, use your dry hand to coat the egg-covered fillet in breadcrumbs and lay it carefully in your hot pan. Repeat the process for your other fillets and cook for 3 to 4 minutes per side until the coating is golden brown and crispy.

This pan-fried fish is best enjoyed fresh, so the meat stays firm and flaky, and the breading stays crisp. It goes well with a squeeze of lemon or a dab of tartar sauce.

Is largemouth bass harder to catch than smallmouth bass?

Pound for pound, smallmouth bass put up more of a fight, though largemouth bass are bigger, heavier, and stronger. But, on average, they pose a similar level of difficulty.

Do smallmouth bass get bigger than largemouth bass?