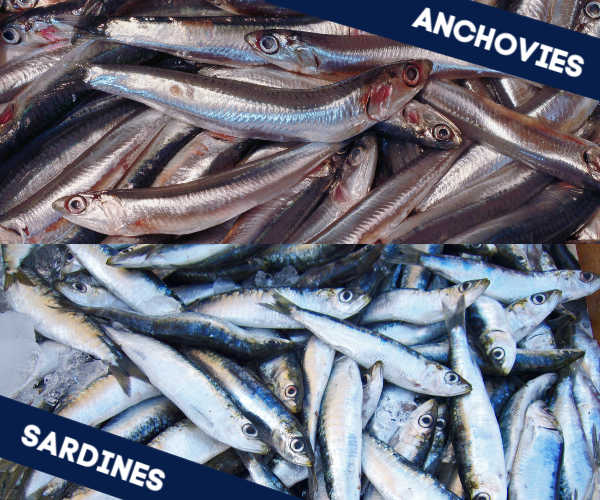 Sardines and anchovies often get mixed up in the kitchen. They’re both paltry sized fish with intense flavor which makes them controversial. While some shake with excitement at the thought of slathering a tin of salty fish onto a pizza, others loathe the idea. If you prefer milder fish then you might want to consider canned tuna or salmon.

Both types of fish are sold on the supermarket shelf next to each other, and their price is also similar. However, when comparing sardines vs anchovies there are a few differences. We are about to provide an in-depth comparison of these two fish. Our review is based on the two types of canned fish, instead of the fresh variety.

What is the difference between canned sardines and anchovies?

Sardines are a flaky, low-oil fish with a rich and fishy flavor. Their flesh is white and they grow to a size of around eight inches in length. Anchovies have a much saltier, intense fishy flavor and many people find them a challenge to eat on their own. Their flesh is a reddish-grey shade and they are smaller than sardines, usually growing to a length of six inches.

Sardines have white flesh and are a little longer than anchovies, growing up to 7.9” (20cm). In the wild, they can be identified with a protruding bottom jaw. When you buy sardines in a can, they’re usually a lot larger than anchovies (see below pic). The flesh of anchovies is reddish-grey color and they only grow to 6” (15cm) in length. In their can they can appear hairy, however, this is just their tiny bones. 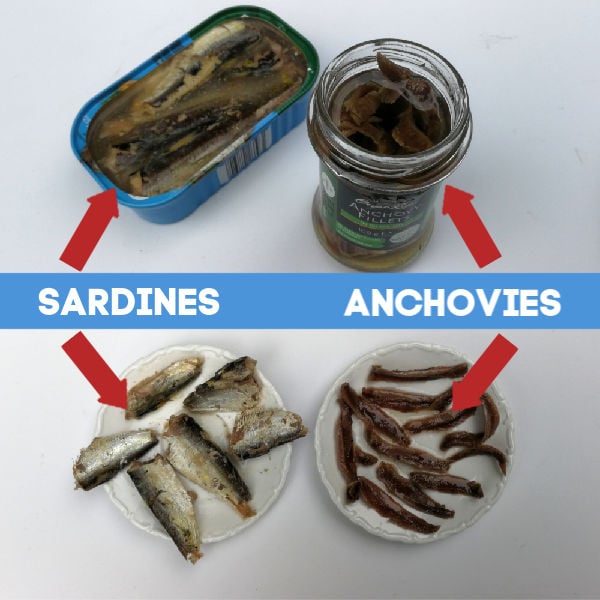 Sardines are bigger than anchovies.

Which tastes the best?

When eaten from the can, sardines have a flaky, less oily textured flesh with a rich, fishy flavor. Anchovies have a much more intense fishy and salty taste with a powerful umami undertone. Sardines could be eaten on their own by most who enjoy fish. But anchovies are so powerful that many find them unpleasant to eat without other flavors to balance out the saltiness.

Although usage does come down to personal preference, sardines are commonly used as appetizers or as a part of main meals such as in rice. Anchovies tend to have too much flavor for some. They are often used as toppings, such as on a pizza. In Italian cooking, an anchovy or two can be tossed into pasta sauce or other slow-cooked dishes; the fish releases a subtle combination of salty and umami taste.

Both fish are versatile and can be cooked using a variety of methods including sous vide, baking, grilling, frying, steaming, or pickling. Some enjoy eating them cold from the can with olive oil, tossed into a Caesar salad, or topped on a cracker with cheese. 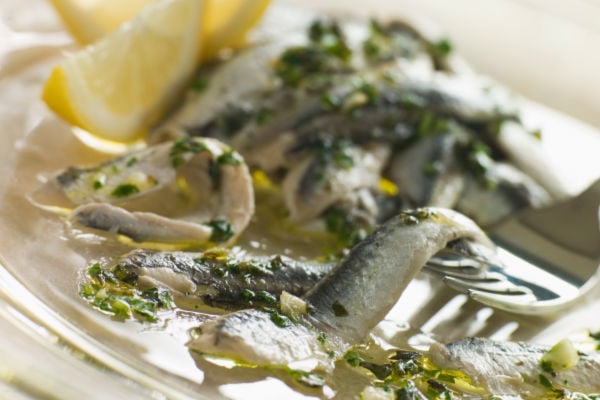 Adding lemon to anchovies helps cut through the fishiness.

How cooking affects them

Many would rather eat soft boiled fetal duck than anchovies on pizza. However, recipes and cooking shows occasionally mention tossing an anchovy into Italian pasta for flavor. Recently, we tested this and were pleasantly surprised! The intense fishiness disappears during cooking and leaves a pleasantly mild taste. It is a good option for adding flavor to food if you’re trying to reduce sodium intake. Sardines are similar when cooked. When they’re heated long enough that the flesh is just showing signs of flaking, the result will be a much less fishy sardine.

If you enjoy salt-ridden fish on pizza remember the rule: only anchovies belong on pizza, not sardines. The original marinara pizza that originated in Italy included tomatoes and anchovies. Adding sardines would be considered blasphemous by pizza aficionados in Italy.

Both sardines and anchovies are high in omega-3 fatty acids, iron, and protein while containing low levels of mercury. These fish are considered a healthy dietary choice and are both useful natural flavor enhancers in cooking. The sodium levels in anchovies are much higher than a sardine, so if you’re looking to cut your salt intake then sardines would be a better option.

Interesting reading:
What are the best mackerel substitutes?
What does dulse taste of?
White bass vs white perch - what is the difference?

You could be excused for not knowing the difference between anchovies and sardines. They’re both small fish sold in cans at the supermarket. They also share a taste which is extremely fishy, salty, and oily. If you’re the type of person who avoids “fishy flavors” then these fish are not for you.

The main difference is in their taste. Anchovies have a higher level of saltiness and they have a strong, pungent, fishy flavor. For most, eating an anchovy sandwich would be unbearable, but a sardine sandwich is conceivable. The most popular use for anchovies would have to be as a pizza topping although they’re a useful ingredient for adding a hit of salt and umami to mains such as pasta sauce.

As both types of canned fish are packed with flavor, you may prefer a milder option? Consider buying canned tuna as an alternative or for mild tasting fresh fillets try red snapper or salmon.

Do you prefer sardines or anchovies? Please let us know in the comments below.