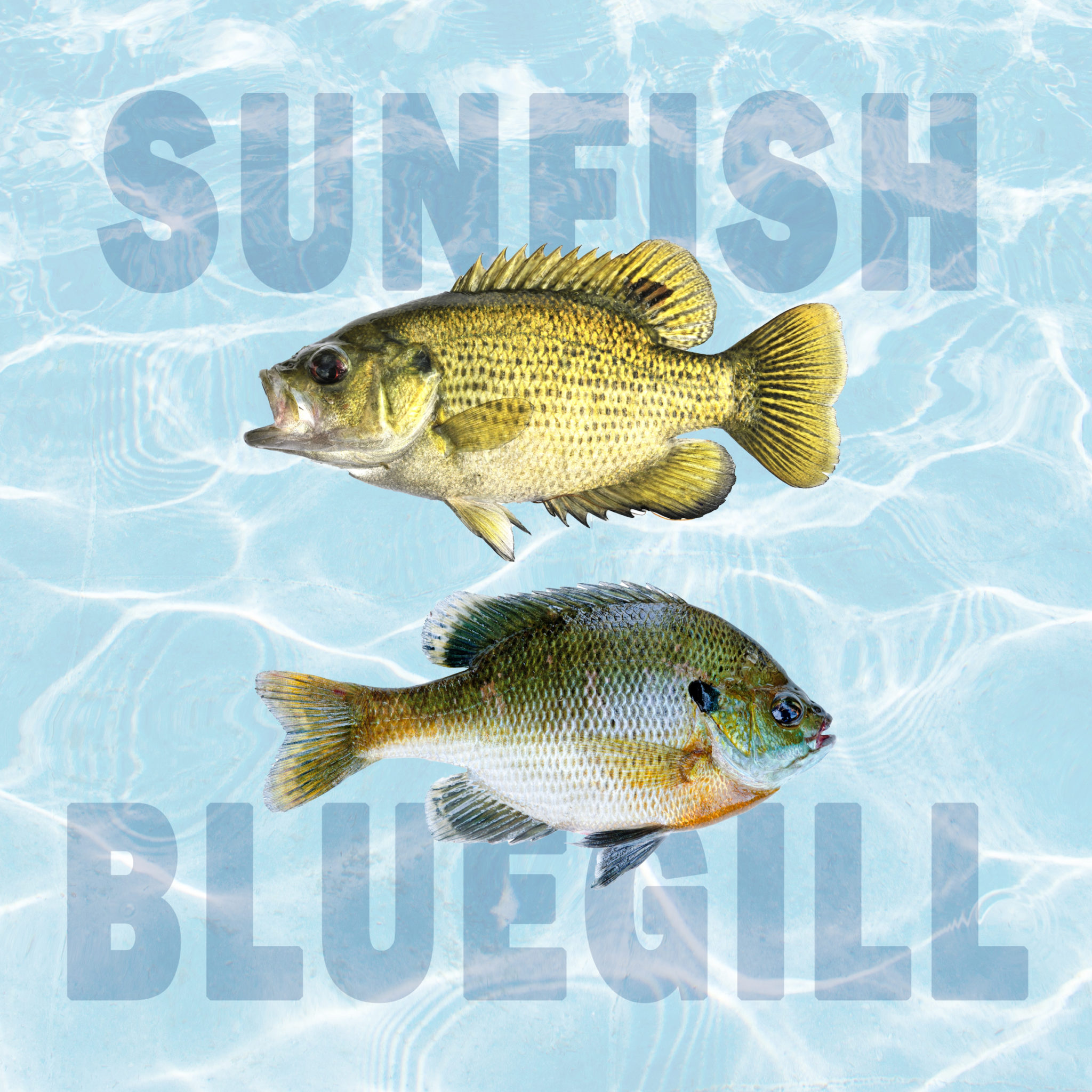 If you love to cook freshwater fish, you may have noticed bluegill and sunfish mentioned in various recipes, sometimes even interchangeably. But, they don’t always stand for the same thing.

Now, let’s discuss the other differences between bluegill and sunfish in detail.

Bluegill (Lepomis macrochirus) is a freshwater fish specie belonging to the Sunfish family native to North America. It’s pretty popular for cooking due to its firm and mild meat. Moreover, it’s also available in abundance in the US and the neighboring countries. You may hear people call it with other names, like bream or coppernose.

Bluegill has a deep-bodied appearance like that of a panfish. It consists of a long dorsal fin, along with a small mouth. However, the unique feature of bluegill is its dark ear covering. Additionally, its dorsal fin consists of a distinctive dark spot.

Note that the body color of bluegill is highly dependent on its age and habitat. Typically, it is green or dark olive.

What are the substitutes for Bluegill?

If a recipe calls for bluegill, and you can’t find it for some reason, try out the below-mentioned alternatives. They almost have the same mild taste as that of bluegill.

Sunfish isn’t mainly a type of fish. Instead, it signifies a family, also known as Centrarchidae, of almost 34 fish species. Some of the popular sunfish include:

Most sunfish have a familiar look. They have a deep body with a laterally compressed appearance, making them look like round pancakes. But, keep in mind that the colors may differ due to the habit and specie type.

All species in the sunfish family, including bluegill, reside in freshwater only.

What are the substitutes for Sunfish?

If the recipe calls for sunfish, you can use any edible sunfish species such as bluegill, smallmouth bass, largemouth bass, rock bass, and many more. They all have a mild, clean, and non-fishy taste compared to other families' fish species.

Differences Between Bluegill and Sunfish

Now, let’s cover the differences between bluegill and sunfish in detail.

The most significant difference between bluegill and sunfish lies in the terminology. Bluegill stands for one particular freshwater fish. On the other hand, sunfish stands for a group of freshwater fish belonging to the same family, Centrarchidae.

Bluegill has a similar taste and texture to that of other sunfish. The meat is firm, mild, clean, and definitely more non-fishy than other table fish. Yet, there are slight differences when compared to other popular sunfish, like bass or crappie.

Therefore, bluegill and sunfish taste pretty similar, but the "fishy" taste might be more pronounced in other sunfish species.

All sunfish, including bluegill, have a standard deep body and pancake-like appearance. But, some features are specific to bluegill only.

For instance, bluegill contains a dark blotch or spot near the end of its dorsal fin. Additionally, it also has a dark ear covering. These features aren’t seen in other sunfish varieties, like bass or pumpkinseed.

If you check the nutrient content of bluegill and sunfish, it’s almost similar. It’s because bluegill is a type of sunfish itself. However, slight variations are typically observed between different species of sunfish.

However, the fat content of bluegill (0.8 grams) is lesser than that of both largemouth bass (4 grams) and black crappie (1.3 grams).

Nutrition Information of Bluegill (per 3 ounces):

Most sunfish have low levels of mercury. But, they differ based on the specie type.

The mercury content of bluegill is around 0.19 μg Hg/g wet weight, whereas largemouth bass ranges between 0.16 to 1.10 (depending on the size).

Sunfish varieties, including bluegill, are popular due to their affordable prices. They range between $0.5 and $5 (per inch) and between $20 and $30 (per pound).

Live bluegill is affordable, as it costs up to $1.5 only. Other sunfish varieties, like freshwater bass and black crappie, can cost more than $2.

The table below denotes the various prices of bluegill and other sunfish varieties.

Bluegill and sunfish are sides of the same coin, as bluegill is a type of sunfish. Therefore, they pretty much have the same appearance, live in freshwater areas like rivers or ponds only, and have mild and firm meat. Yet, there are minute differences between different species of sunfish and bluegill - that we’ve successfully covered in this article!