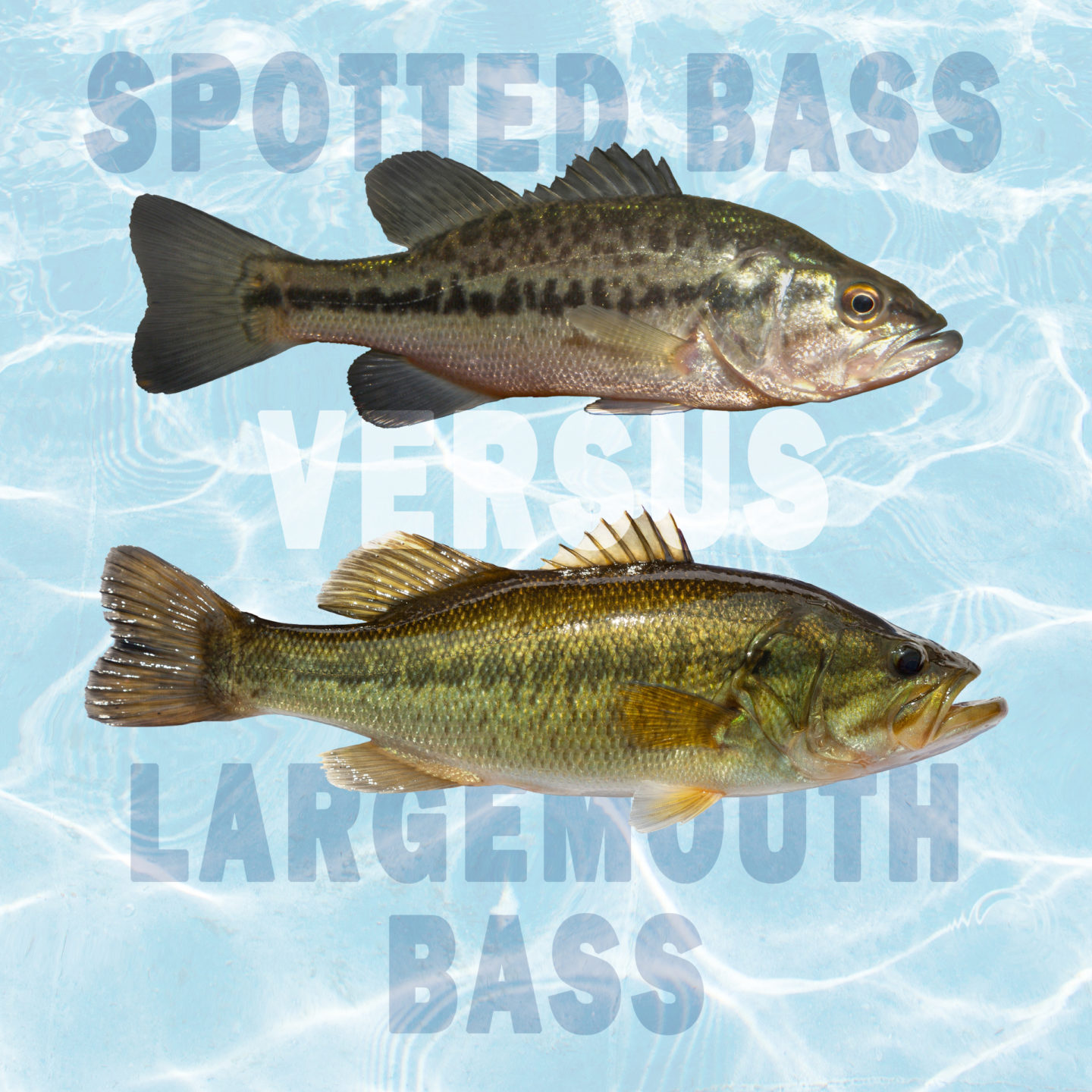 Differentiating the spotted bass from the largemouth bass can be tricky, especially if you don’t know what you’re looking for. However, the main differences between the two are their body size and jaw length. Largemouth bass usually grows bigger than spotted bass and has a more prominent jaw that extends past the eye line.

What is Spotted Bass?

The spotted bass, commonly known as spotty or spots in certain fishing areas, is a freshwater fish from North America that belongs to the Centarchidae family of the order Perciformes. It gets its name from the rows of black dots that appear below the lateral line. It is endemic to the basin of the Mississippi River and the Gulf states, from middle Texas to the Florida panhandle, and is one of the black basses.

It was introduced to Virginia and western North Carolina from its original area in the west Mid-Atlantic states. Unfortunately, people brought spotted bass to southern Africa, where it has established itself as an invasive species in certain isolated waterways.

Because of the coloring, many fishers mistake spotted bass for largemouth bass. However, there are significant distinctions. For example, smallmouth bass or "smally" and spotted bass are sometimes confused, although the spotted bass lacks the vertical bars on the sides of the smallmouth's body. Once caught, you can grill spotted bass as they have flaky, firm white meat.

What is Largemouth Bass?

The largemouth bass is a predatory freshwater gamefish belonging to the Centrarchidae sunfish family native to the central and eastern United States, southeastern Canada, northern Mexico, and other vast freshwater sources.

The largemouth bass appears as an olive-green to greenish-gray fish with a jagged horizontal stripe down each side formed by a succession of dark, often black, blotches. When largemouth bass is around a year old, they attain sexual maturity and begin spawning. Spawning occurs in the spring when water temperature first rises to 60 degrees Fahrenheit (16 degrees Celsius) for an extended time.

Anglers prize largemouth bass for the thrill of their 'battle' when catching the fish. In their attempt to toss the hook, the fish will frequently get airborne, although many believe that its related species, the smallmouth bass, is much more aggressive.

Spotted and largemouth bass favor distinct environments, as most experienced angler knows. While they both live in the eastern and central United States, they prefer to cluster in different bodies of water.

Spotted bass, for example, can be found in fast-moving rivers and streams with rocky bottoms. Largemouth bass, on the other hand, prefers slower-moving, clear water. Furthermore, the spotted bass is more tolerant to warm water than largemouth bass.

The largemouth bass is the state fish of Mississippi and Georgia and the state freshwater fish of Florida and Alabama. At the same time, the Ohio River basin and the central and lower Mississippi River basins are home to spotted bass.

When comparing both fish side by side, it's clear that the largemouth is substantially larger. Spotted bass may reach lengths of 25 inches and weighs 11 pounds. Meanwhile, the largest largemouth fish may grow up to  29.5 inches long and weigh 22 pounds and 4 ounces. The longest and biggest fish are breeding females, which anglers catch and release to keep the local population healthy.

The jaws of these two fish should be the first thing you notice about them. Largemouth bass has a large jaw that extends over its eye on top and sticks out far more on the bottom. The upper jaw of spotted bass is smaller and does not reach past the eye. Spotted bass has mouths with almost equal jaws on top and bottom.

Both species have spiky and soft dorsal fins that look identical when laid flat. However, when you lift their fins, the similarities start to diminish. This is because a membrane joins the two fins of spotted bass. Meanwhile, the two fins are virtually entirely separated in largemouth bass because there is no such membrane.

If you're holding a bass fish and aren't sure what it is, open its mouth and examine the tongue. A rough patch will be present in a spotted bass tongue. On the other hand, largemouth bass has a smooth tongue. Although it is a slight distinction, it is noticeable if you look closely.

The Largemouth bass is greenish-grey on top, black on the gill covers, and occasionally a mix of greenish-grey and silvery or blue on the sides. The Spotted Bass, on the other hand, has a yellowish-green body with dark olive to brown top. In addition, spotted bass, like the Largemouth, has black patches on the top of their bodies.

Dark-edged, prominent scales can be found between the lateral line and the dark horizontal band on spotted bass. On the other hand, largemouth bass has fewer noticeable scales in the same place, giving them a smooth appearance.

Spotted bass and largemouth bass share the same diet. However, spotted bass eats only about half the food that largemouth consume. Instead, their diet consists of tiny baitfish, scuds, copepods, water fleas, small shrimp, and aquatic insects are the primary food sources for juvenile largemouth bass.

You can find spotted bass in open areas as they prefer clean water. You can have a successful spotted bass fishing in waters as deep as 30 feet.  Largemouth like shallower waters and are unconcerned with water purity. Spots stay active throughout the winter, whereas Largemouth bass slows down when the temperature drops.

You can use a variety of lures and baits in bass fishing, but according to famous fishing tips, larger bait and lures perform better for Largemouth Bass than Spotted Bass.

Bass are excellent sources of nutrients. Spotted bass and largemouth bass both contain almost the same amount of nutrients. For example, 3 ounces of bass provides 21 grams of protein, 0.77 grams of Omega-3 fatty acids, 82% of vitamin B12, and a considerable amount of phosphorus, potassium, copper, and other B vitamins.

Smallmouth bass and spotted bass have comparable flavors. Both have a clear, mild to sweet taste. Spotted and smallmouth bass do not have the same fishy flavor as largemouth bass. Both fish have white flesh that is firmer than crappie and other freshwater fishes.

Mercury levels in spotted and smallmouth bass are comparable. They've both been placed on mercury alert warnings in various jurisdictions. For any fish deemed higher in mercury, you should only eat them once a week.

What is the difference between a spotted bass and a largemouth bass?

Although spotted bass is most similar to largemouth bass, you should be keen on their body size and jaw length. The largemouth bass is more prominent and has a bigger jaw that extends past its eyes. You can also watch out for their scales. As the name implies, spotted bass has dark spots on its lateral line.

Is Kentucky and Spotted Bass the same?

Yes. The spotted bass is also called Kentucky bass, as they are widely distributed around that area.

Are there other types of bass fish?