If you're like me and like to enjoy one of the world's favorite sauces, you might be wondering if it's acidic and if you can continue to add it to your favorite meals. I mean, come on, sushi without soy sauce is just bland. I need that extra kick from the soy sauce. 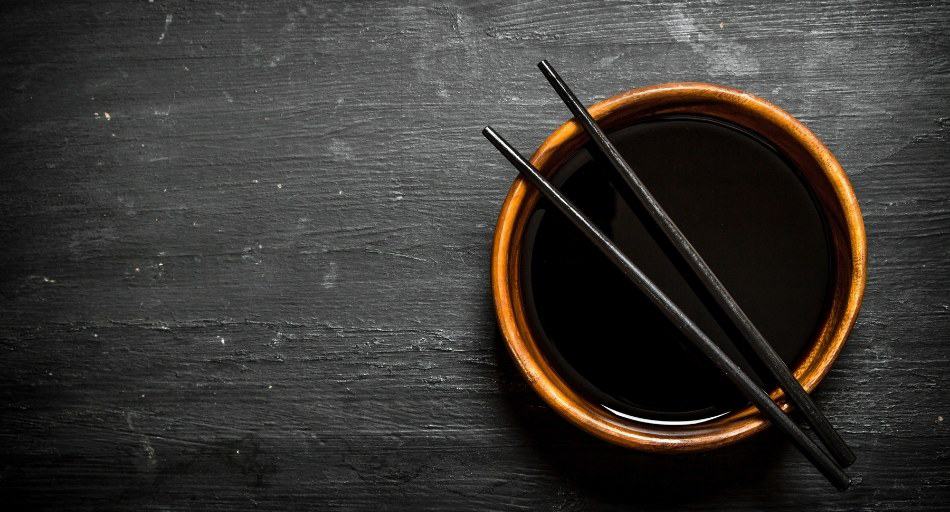 Yes, soy sauce is considered to be acidic. Its pH value is around 5, with one of the bestsellers, Kikkoman Soy Sauce, having a pH of 4.8. Therefore, most people with GERD do not recommend it because it might cause acid reflux.

What is soy sauce exactly?

Soy sauce is probably man's oldest prepared seasoning and is widely used in both Oriental and American cuisine. It's a yummy fermented soy product. Five companies account for 50% of total soy sauce production.

There are two basic types of soy sauce:

What is the pH of soy sauce?

As I've already mentioned, the pH of soy sauce is around 5 (4.8 for Kikkoman). Although that might seem closer to a neutral level of 7, it is still considered acidic. And this acidity is actually what gives it its "refined, rounded tartness."

A pH of 0 is totally acidic, while a pH of 14 is completely alkaline. A pH of 7 is neutral.

You can reduce the amount of acidity while cooking food, including when cooking with soy sauce, by sprinkling small amounts of baking soda. You can add it until the tart flavor of the food is reduced but remember to taste the food often so that the taste of baking soda doesn't take over the taste of the meal.

Another great tip is to cook dishes only for the shortest time possible so that water isn't cooked away and acid isn't concentrated in a smaller volume of food.

Cooking with soy sauce doesn't necessarily make it more or less acidic, especially if you add it towards the end of cooking.

GERD is a very individual disease - what affects you negatively may be fine for others.

While it might not be the worst for GERD, it sure isn't going to help if you're battling with acid reflux. Soy sauce does have a considerable amount of acids inside that contribute to that distinguished flavor. A good tip is to incorporate high-alkaline foods into high-acid foods, as the alkalinity reduces the acidity.

Include high-alkaline foods into high-acid foods, as the alkalinity reduces the acidity.

What will happen if I eat soy sauce every day?

Japanese people tend to live the longest, and they probably eat more soy sauce than anyone in the world. Could there be a correlation? Hmm...

It is ok to eat soy sauce every day if you don't have acid reflux issues, of course, if you are consuming an appropriate amount, which would be less than three smaller servings, from 1 to 2 tablespoons.

The daily consumption of soy sauce in Japan is estimated at about 30 ml per person according to the data from the Japan Soy Sauce Brewers Association.

Naturally brewed soy sauce contains about 1-1.6% nitrogen, 17% -19% simple sugars, and 1% -2% organic acids. Free amino acids, especially glutamic acid, make up about 45% of the nitrogen and are responsible for the umami flavor.

What are possible heath issues of eating too much soy sauce?

So while chemically manufactured soy sauce is made quicker and cheaper, the resulting soy sauce tastes inferior, contains some toxic compounds, and may require extra colors and flavors.

Also, in general, soy sauce is high in sodium which can increase blood pressure. It can also be high in MSG (food additive), and it contains significant amounts of amines, including histamine and tyramine. Too much histamine can cause headaches, dizziness, itching, and rashes if eating in high quantities.

It also contains wheat and gluten that can be highly problematic for people with wheat allergies and celiac disease.

What sauce is good for acid reflux?

If you suffer from really bad acid reflux, the best would be to mix your own sauces from scratch and from ingredients that have a proven track record of not triggering your disorder.

Most sauces aren't too complicated to make, and you'll be in complete control of the ingredients used, unlike the Russian roulette of cooking with the store-bought sauce.

If you have GERD, it's best to skip soy sauce or use it in small amounts as it is acidic. Besides tasting great, soy sauce has many health benefits as well. And if you continue to use it, it's best to go for the naturally brewed soy sauce (NBSS) as it has more benefits than the chemically produced one (HVP).

Soy sauce is good for glazing roasted or pan-fried meat, fish, and vegetables due to high levels of natural umami. You can use soy sauce instead of salt to bring out the flavor of the food even more. Soy sauce goes well in simmered dishes, and it's great for seasoned rice and noodles.

What are good substitutes for soy sauce?

Sometimes soy sauce is not on our list of food due to allergies or some ingredient that we need to avoid in general.
But you still want to enjoy some of those dishes where soy sauce is traditionally used. Good substitutes in recipes calling for soy sauce would be Tamari sauce which is also made from soybeans but whit just wheat, Worcestershire sauce which has less sodium.

A good alternative is Miso paste, too, then Fish sauce and Coconut aminos with umami flavor similar to soy sauce.