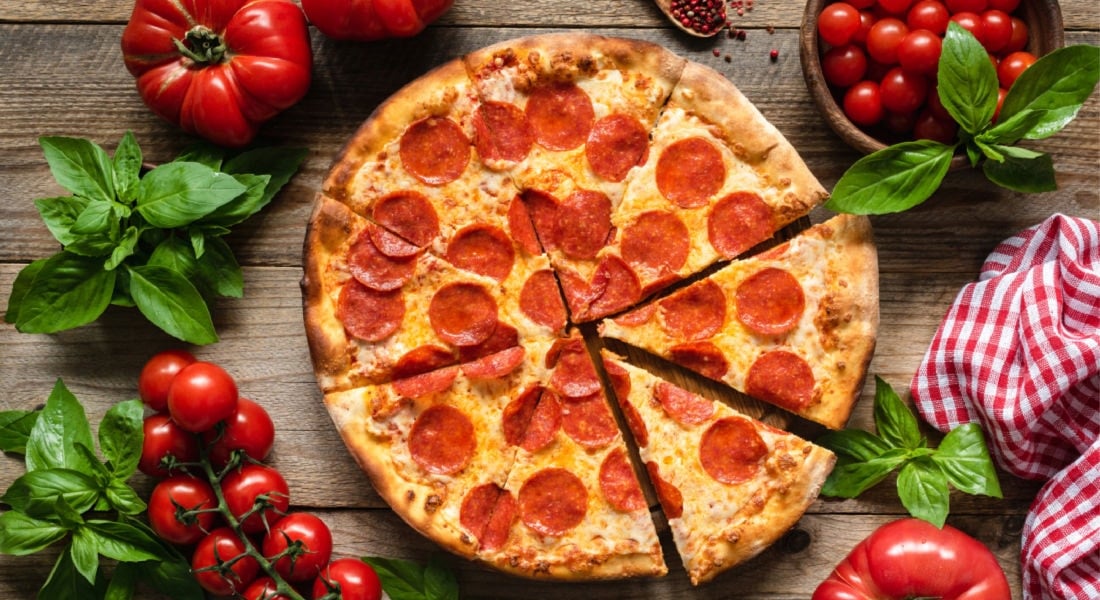 Food bloggers are overloading our senses with creative new pizza toppings that look irresistible. But what is old world pepperoni and does it still have a place in modern pizza recipes? We’re about to take a close look at pepperoni and answer all those burning questions.

What is old world pepperoni?

Old world pepperoni is a bright red type of American salami that is made from cured beef and pork. Seasonings like chili and paprika give the meat its characteristic smoky flavor. Once cooked, old world pepperoni looks different from regular pepperoni as it curls up, causing the edges to turn crispy.

Old world pepperoni is a relatively thin salami with a tougher texture and brighter red meat than pepperoni. It is also harder to slice through than regular pepperoni and its edges curl up when cooked. Many consumers didn’t like the way the old world option curled and burned on the edges, so food manufacturers introduced American-style pepperoni.

Pepperoni originated in the United States during the early 1900s as the Italian migrants began opening pizzerias and butchers. Although an exact date is hard to pinpoint for its creation, pepperoni was first mentioned, in writing, back in 1919 in New York.

The word ‘pepperoni’ derives from the Italian word peperoni, which translates to bell pepper. Although salami isn’t a close fit to red pepper, there is also a pepper called pepperoncini that is pickled and used on American pizza. So, it seems that pepperoni loosely relates to red peppers.

In the early 1900s, pepperoni made its appearance as a topping for pizza in Italian delis. The Italian migrants changed the meat to appeal to local taste preferences. Instead of using coarsely ground meat, they opted for a finely ground alternative. Also, the pepperoni used artificial casings rather than natural sheep intestine casings used back in Italy.

Why does old world pepperoni curl?

Old world pepperoni curls up because the natural casings shrink when cooked, causing the lip to rise. Also, the slices are cut thicker which causes the top of the pieces to heat faster than the bottom, resulting in curling.

As the slices curl, it causes the sides to cook faster than the rest of the toppings. People that love crispy meat edges on their pizza may prefer old world pepperoni pizza. If not, American pepperoni, which uses an artificial casing, is a better option.

How is pepperoni made?

Pepperoni is commonly made by combining ground beef and pork with spices, salt, and sodium nitrate. To help with preservation, lactic acid bacteria is often injected into the meat to lower the PH levels.

The meat mixture is then stuffed into natural or collagen casings and cooked at a low temperature, before drying the sausage for up to 20 days.

Pepperoni and salami are cousins that share a similar appearance and usually contain beef and pork. However, pepperoni is spicier than most salamis, and its primary use is for topping pizzas. Salami covers a wide range of sausage sticks and, although used on pizza, has many other applications like sandwiches and antipasto platters.

Related reading:
What is a suitable nduja substitute? Get the answers here.

Although pizza originated from Italy, the United States has managed to put its spin on the classic by adding pepperoni topping. Here’s a simple pepperoni pizza recipe for you to try at home.

Tip: A toaster oven is a great option for making pizzas fast.

Fast facts about pepperoni and pizza

Although pepperoni is usually made from beef and pork, some versions are made from 100% beef to cater to local tastes and religions. If pepperoni only uses beef, then it must legally be called beef pepperoni. Pork meat has a higher level of fats which results in a juicier texture when compared to beef pepperoni.

Aside from regular pizza, you can use pepperoni in various other ways:

Pair the spice of pepperoni with creamy cheese and a selection of fruit to add sweetness to the platter. This combination is a good option for picnics or entertaining guests.

The West Virginian snack is an easy meal with a history dating back to around 1920. Pepperoni is encased in a bread roll with cheese. It is a popular snack in the South and Mid-Atlantic regions of the United States.

Potato skins are a tasty snack often topped with bacon pieces. In parts of America, adding pepperoni instead of bacon is a growing trend.

What is cupped pepperoni?

When old world pepperoni gets cooked, the edges curl up, creating the shape of a cup; hence, cupped pepperoni.

Is pepperoni made of meat?

Pepperoni is usually made from a combination of cured pork and beef.

Where can I buy old world pepperoni?

1 Delis, butchers, and specialty stores: Depending on where you live, you can pick up old world at retail stores. You can also ask the store manager or owner to get some in for you if it isn’t ranged.

2 Pizzerias: If you’ve never tried old world pepperoni then buying it toped on a pizza is an excellent option. You can test it out to see if you like it before buying a whole sausage.

3 Online: This is probably the easiest option for people that live outside of New York and other pizza-loving cities.

There are different styles of pepperoni on the market in the U.S. American style is the most popular type used for pizza making. This type of salami was developed to stop the curling edges of old world pepperoni, which some consumers didn’t enjoy.

There are still “old school” pizza fanatics in the United States that love old world pepperoni for its taste, texture, and cooking properties.