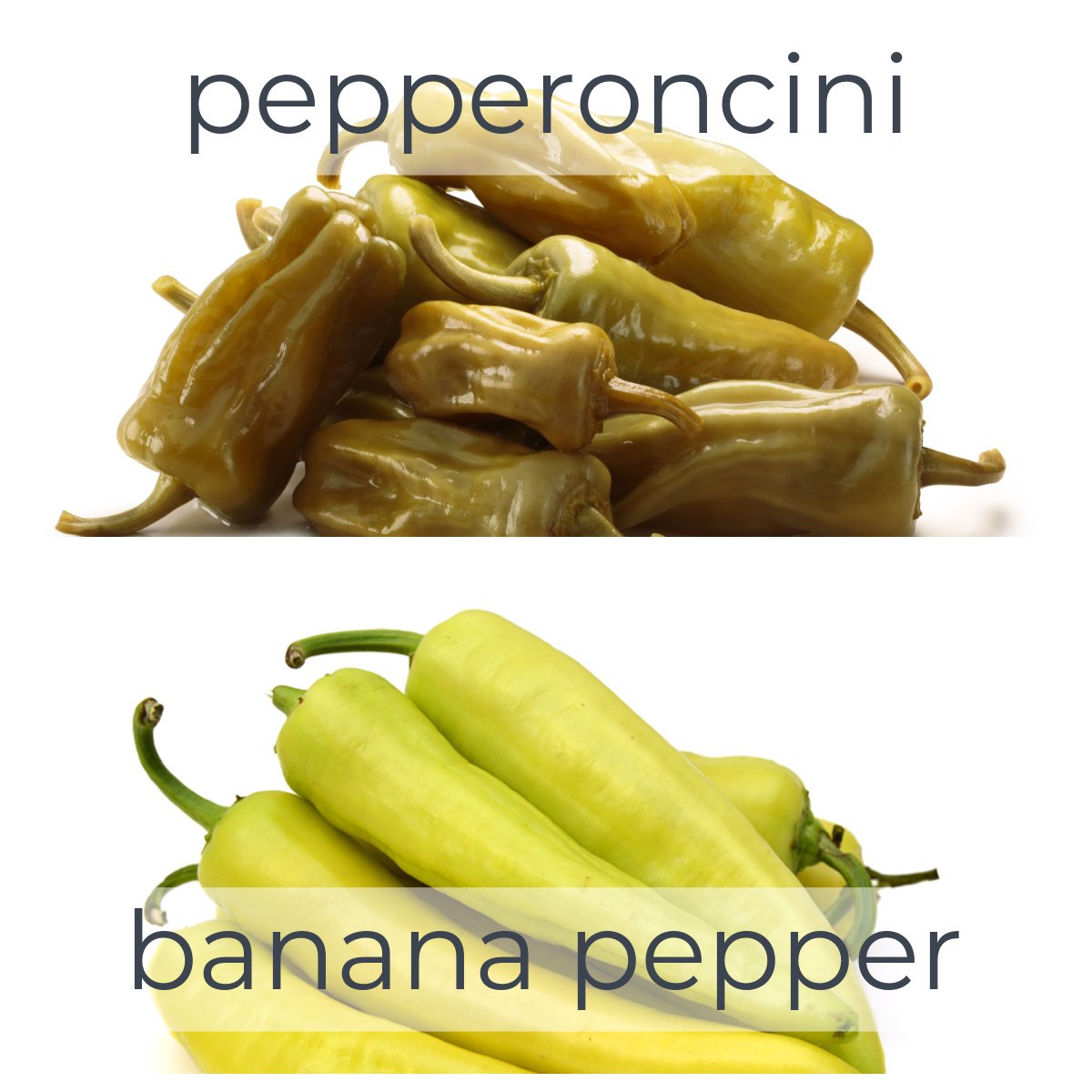 Pepperoncini and banana pepper are only two of the 50,000 known pepper varieties, yet you may have difficulty telling one from the other. This article will comprehensively analyze their differences in terms of appearance, heat factor, taste, availability, and versatility.

Two common types of pepper are the pepperoncini and the banana pepper. In some ways, they're very similar. But they do have some subtle differences which can impact your dish. We put these two peppers under the microscope to find out how they differ in appearance, heat, taste, availability, and versatility. By the end of this article, you'll know which is the best option for your next recipe.

Let's start with the hardest attribute, the looks. They both look very similar in color, shape, and length. Those in the food industry have been known to get these varieties confused.

It's tough to separate the two based on color and size. Your best bet is to look at the skin. The banana pepper will often have a smoother complexion; the pepperoncini usually has wrinkles and imperfections. Banana peppers also tend to be more pointy, like a banana.

Fast Fact: The pepperoncini is a sweet, mild pepper. It is known as friggitelli in Italy.

Before we compare the heat of these peppers, let's look at the scale we use to analyze them. To compare the chilis, a standardized measure known as the Scoville heat unit (SHU) is useful. This measure tells us the concentration of capsaicin, the active compound responsible for the chili's heat.

If you're after a hot chili pepper, then you may be disappointed with both these two options.

The pepperoncini and banana pepper are both extremely mild options. You could barely sense any heat from them; they're only just warmer than a bell pepper!

Unlike virtually all other peppers, the banana pepper can drop down to zero SHU units. At its mildest, the pepperoncini scores 100.

Both peppers offer a lovely sweet flavor which you can appreciate as the heat isn't overpowering. Although the two peppers have a similar taste, the pepperoncini will provide a little more tang.

In the U.S. banana peppers are by far the most readily available fresh option. They're in most supermarkets as well as online. Pepperoncini is less readily available, so the diehard lovers of this variety generally resort to growing their own at home.

Most of the time, I prefer using banana peppers in recipes. They have thicker walls, which means they're more robust. Stuff them with your favorite mixture of mince and seasoning for a hearty, colorful meal. Pepperoncini won't hold its shape as well, and the heat will often cause the walls to break up.

Banana pepper is also the best option for any recipes that use the pepper raw such as a sandwich or sprinkled on salads. Once again, the thicker walls help it hold its shape and look a lot more appealing on the plate.

Pepperoncini excels in other areas, too. They're excellent for pickling thanks to their tangy flavor. They're also perfect on top of a pizza to add flavor that you couldn't get from banana peppers. Pepperoncini and artichoke soup provides a delicious combination of flavors.

Which is Best for Cooking?

Peppers are a vibrant, flavor-packed ingredient, used in a wide variety of dishes. They add texture, flavor, heat, and color to a meal. However, they come in a vast array of types, so it's important to know what you're using before feeding it to your family or friends.

A common question is "what's the difference between pepperoncini and banana pepper?". It's a good question as they're quite similar in looks, heat, and flavor. To distinguish the two, look at the skin; if it's wrinkled usually means you're dealing with pepperoncini.

Probably the biggest question most cooks have is which variety is best to eat. The banana pepper is undoubtedly the most versatile option as it's robust and is excellent for stuffing. It's milder flavor make it excellent served raw also. But if you like to add a bit of extra flavor to your dishes, it's hard to beat the pepperoncini. They have a tang that takes pizza and other Italian dishes to another level.

Related reading:
What are some suitable substitutes for bell pepper?

How to Chop a Chili Pepper

Do you have a favorite between these two? Why not let us know in the comments below.