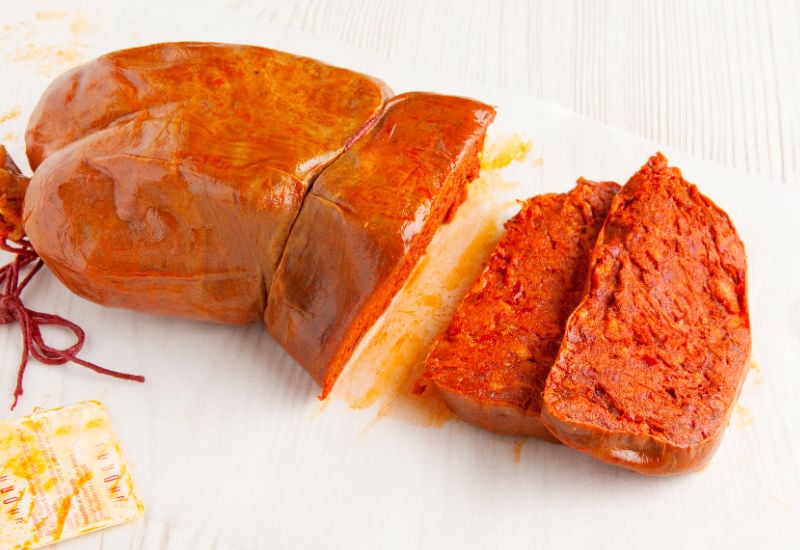 Nduja is a spreadable pork salami that packs a spicy punch. It is made from parts of a pig’s head, offal, skin, and other meat cuts. The ingredients are also combined with hot chili peppers. Originating from Calabria, a region in the South of Italy, this meat is commonly smeared onto bread or meat, scooped into pasta, or dotted onto a pizza. Moderation is the key when using this ingredient, which provides fiery heat to anything it comes into contact with.

It can be a challenge to get nduja in stores outside of Italy. If you can’t find the salami near you, then you’re going to need a suitable nduja substitute. We’ve compiled a list of the best alternatives so that you can finish recipes without it.

Chorizo is a Spanish sausage made from pork meat and fat. It is seasoned with paprika which gives the sausage a smoky flavor that is similar to nduja. You’ll need to chop the meat into chunks and then process them to create more of a paste-like consistency. Add a splash of chili oil to add a little moisture and increase the heat.

Soppresetta is an Italian dry-cured salami that is typically made from pork. Although its taste can vary depending on who makes it, the salami will often contain spices like fennel, oregano, and garlic. Chili flakes are usually added which results in spicy meat, similar to nduja.

Pepperoni is a salami that is made from pork and beef and has a spicy, bold flavor with a mildly smoky undertone. It also has a vibrant red color that isn’t far removed from nduja, so it makes a good substitute.

Like the other hard salamis on this list, you’ll need to puree the meat well in a food processor to create a paste texture. You can also add a spoonful of spam spread to the meat during processing to create a smoother consistency.

Be sure to check out our article which looks at old-world pepperoni and how it differs from classic pepperoni.

Sobrassada is a Spanish cured sausage made from pork, paprika, and other spices. Its texture is smooth and spreadable, like nduja, perfect for adding flavor to meats and adding color and depth to casserole. It can also be used in stuffing and pasta sauce.

Are you looking to replace nduja with a plant-based alternative? To mimic the spicy meat you can add sundried tomatoes, extra virgin olive oil, paprika, Calabrian chili peppers, and salt to a blender. Process everything until a paste forms. 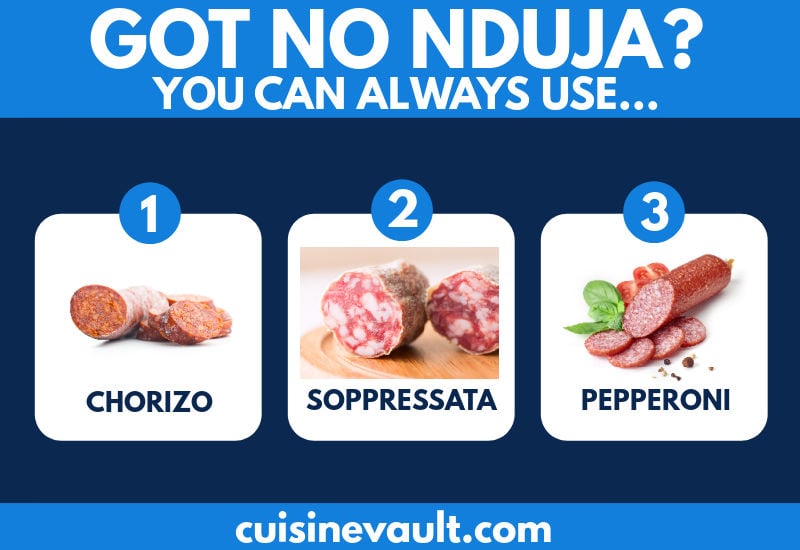 Can nduja be eaten raw?

Nduja can be eaten raw and does not require cooking. Calabrians enjoy eating the meat spread onto bread or crackers; however, it is suitable for cooking in pasta, slow-cooked meat dishes, and makes a spicy, colorful pizza topping.

How long does Nduja last in the fridge?

Nduja will last at least 3 months in the refrigerator so long as it is kept in its original casing and wrapped tightly with another layer of cling wrap. The exposed end of the meat will darken over time. It is still suitable for consumption, but if you want vibrant red meat paste in your food then you can slice the end off. Nduja is also suitable for freezing in securely wrapped plastic and should be allowed to thaw at room temperature before using in food.

Nduja is made using pork meat, roasted chili pepper, seasonings, and is then stuffed into casings. Although nduja is often gluten-free, you’ll need to check the label as some casings contain gluten. 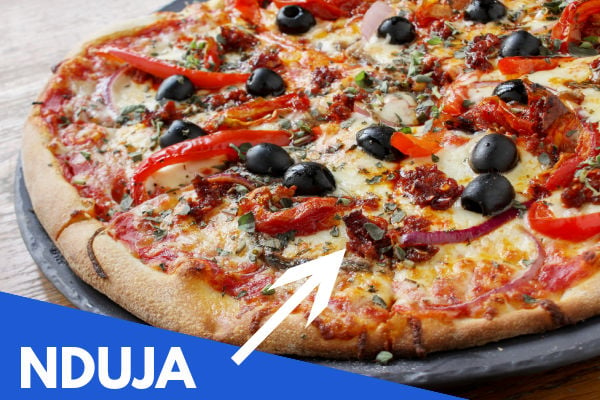 Nduja is a salume that is capable of setting your mouth on fire, thanks to the liberal addition of Calabrian chili peppers during production. But what sets this meat apart from other charcuterie (other than its spiciness) is its texture. Unlike other meats, nduja is more of a paste which makes it an extremely versatile ingredient. This means that if you decide to use a nduja substitute then you’ll need to process the replacement to turn it into a paste. Whatever alternative you choose, you’ll probably want to dial up the heat by adding extra chili pepper. The addition of olive oil, and perhaps spam paste, will help create a more nduja-like consistency.

Our recommended replacements for nduja are chorizo, soppressata, or pepperoni. Although they all differ if flavor and texture, a few simple steps should allow you to rustle up something similar. Spread onto bread, a Calabrian may notice it isn’t the nduja they know and love, but cooked in a pasta dish and many wouldn’t even notice.

What is your favorite type of salami? Please let us know in the comments below.