Naan bread is a leavened bread that is a staple in Sri Lanka, India, and parts of Southeast Asia. The authentic version is cooked in a clay tandoor oven at an extremely high temperature for 30 seconds before it is ready to eat.

Naan has a puffy, cloud-like top with a crispy bottom. Its mild flavor is a little saltier than regular bread, and it has a doughy texture. Use naan for mopping curry sauce, pizza bases, as a kebab, or served alongside any main course with basmati rice.

If you can't get your hands on naan bread or it’s not suitable for dietary reasons, then you may prefer to use an alternative in your next meal. We've compiled a list of our favorite naan bread substitutes which don't require the use of an expensive tandoor oven.

What can I use to replace naan bread?

The best substitutes for naan bread are roti, paratha, puri, pita bread, or tortilla. Although they all have subtle differences, they are all perfect for a delicious snack or served alongside your favorite Indian curry. For a more authentic option, you can also make your own bread at home, so we've included a simple yeast-free naan recipe at the bottom of this page.

Roti bread, also known as chapati, offers an excellent replacement for naan bread that is healthier and simpler to make. You take a finely milled flour, such as Atta, and add a little salt and water then knead until soft. After resting the dough for 10 minutes it can then be thinly rolled and cooked in a piping hot pan for one minute on each side.

The biggest difference between the two is that roti is unleavened so there is no yeast involved. For those that can't eat yeast, roti bread is your best option. It is also lighter than naan bread; Indians eat roti as an everyday meal item whereas naan bread is more likely to be reserved for special occasions.

Paratha is a whole wheat flatbread that is fried in oil or ghee on the griddle or Tawa (stone frying pan). Its texture is flakier, denser, and chewier than naan bread. This is because of the different cooking styles. Paratha bread is rolled out on the bench several times and folded like puff pastry, while naan is usually only rolled once and then baked.

Although naan bread is usually served as an accompaniment to other dishes, paratha is sometimes served as a standalone dish. It can be eaten for breakfast lunch or dinner and is served with a selection of other delicious ingredients.

Puri, or poori, is an unleavened flatbread that is made from whole wheat. It originated from the Indian subcontinent and is eaten as a snack or served with other savory or sweet recipes. If you enjoy deep-fried food then you may prefer to serve puri rather than naan bread. It is cooked in very hot oil which causes the dough to puff out and turn crisp. 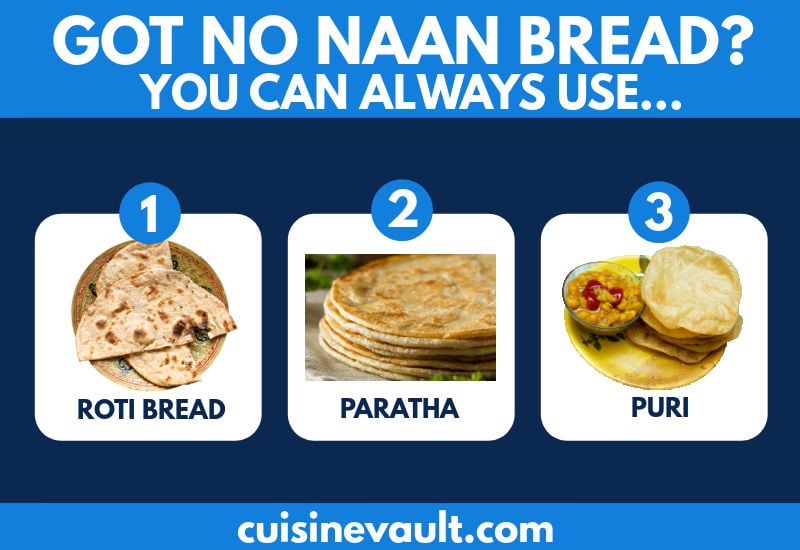 Pita bread and naan share similarities as they are both leavened, wheat flatbread. However, naan is usually a softer texture and contains additional ingredients like yogurt and milk. Pita has fewer ingredients and has a drier, tougher texture. It is more commonly partly sliced in half and filled with meat, cheese, lettuce, or other ingredients commonly used in sandwiches.

Pita and naan are both excellent for using as pizza bases or serving with your favorite dips.

In the United States, tortillas are an easy to find type of bread and they can be used as a great replacement for naan. Although not traditionally used as an authentic Indian bread, the tortilla will certainly hold its own at the table, served with tasty classics like butter chicken or chicken tikka.

The biggest differences between these two types of bread are that naan is made from wheat flour and is leavened while tortillas are traditionally made with maize and are unleavened.

Follow the simple steps below to make fluffy, soft naan at home. Although this bread traditionally uses yeast, the recipe below leaves it out. We did this to save you the hassle of having to wait for the dough to rise. Also, it can be made by anyone that is on a yeast-free diet. 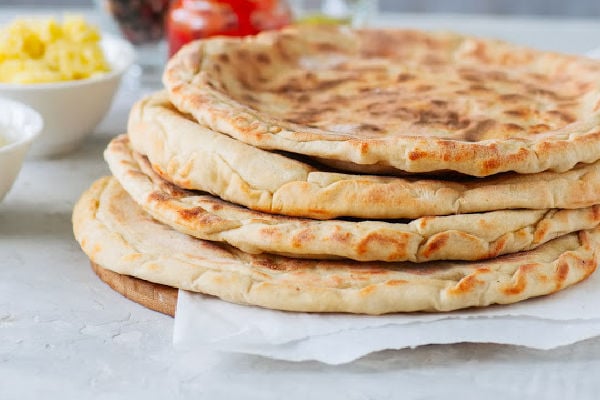 Related reading:
What are some useful khoya replacements?
What are the best alternatives to fenugreek?
How do saag and palak paneer differ?
What are some good urad dal substitutes?

How do I store naan bread?

Cooked naan bread can be stored in a cool dry place at room temperature for up to three days. It can also be refrigerated in a zip lock bag for up to seven days.

Naan bread can be frozen in a zip lock bag for up to six months before it starts to lose its quality. When it comes time to use the bread, allow it to thaw to room temperature and then cook briefly in a pan on a high heat.

Raw naan bread dough is best to be cooked fresh at the time it is made. If you have to refrigerate it, then keep in mind that its texture will become sticky and you'll probably need to add extra flour and knead it before cooking.

Making naan bread at home is easy and only requires a few simple ingredients. However, authentic naan is cooked in a tandoor and if you don't want to cook yours on a pan then you may prefer an alternative option. The best substitutes for naan bread are roti, paratha, puri, pita bread, or tortilla. It's hard to beat naan for flavor and texture, but few will complain if you use one of these alternative breads with your next meal.

What is your favorite type of bread for serving with Indian dishes? Please let us know in the comments below.