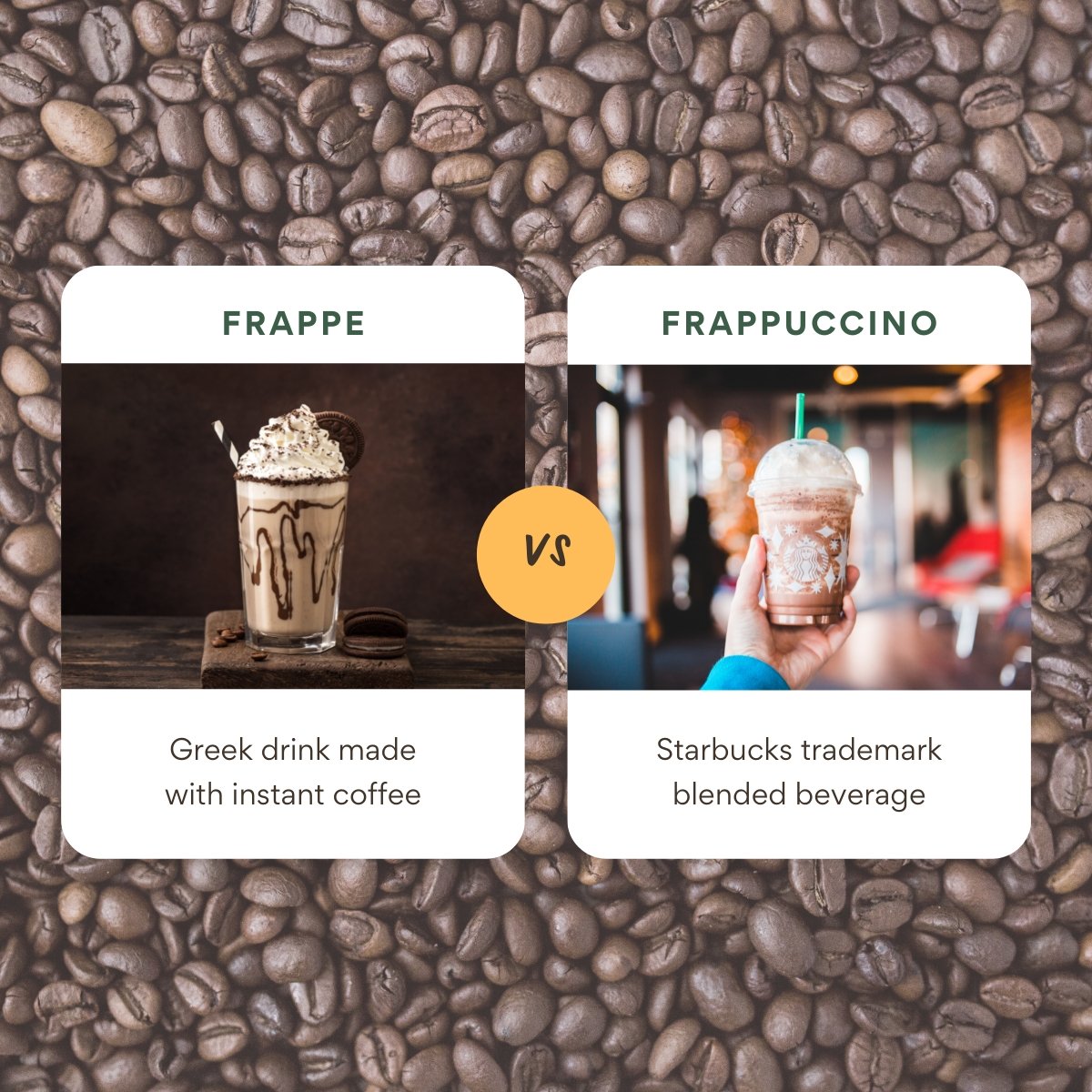 In the United States, these drinks have more or less become the same thing. However, Frappuccinos are specific to Starbucks, while frappes aren’t. They are both blended coffee drinks that are popular around the world.

Below, we’ll go over their differences and answer some frequently asked questions.

What is a Frappe?

A frappe is a Greek drink made with instant coffee, water, milk, and sugar. It’s served over a handful of ice cubes and sometimes with a scoop of vanilla ice cream.

One big thing is that “frappe” isn’t trademarked. So, any coffee shop can serve a blended instant coffee drink and a scoop of ice cream and call it a frappe.

And all you do is throw all the ingredients into a glass and stir vigorously or shake.

If you want to get fancy, you can use a handheld milk frother to whip the drink. You can also add some ice cream. It really doesn’t matter when, but I like to add mine after mixing the drink.

Bottom line: A frappe is any blended coffee drink made with instant coffee, water, cream, and syrup served over ice cubes. It’s the non-trademarked version of the Starbucks Frappuccino.

What is a Starbucks Frappuccino?

First things first: Starbucks has a trademark on “frappuccino.” So, any coffee shop that wants to serve a blended coffee drink must call it a frappe instead of a Frappuccino.

While that isn’t terrible, it blurs the lines between an authentic Greek frappe and a modern American Frappuccino. While an authentic frappe is a blended drink with instant coffee, a Frappuccino has many more variations.

Frappuccinos also have many styles. Starbucks makes Frappuccinos with various syrups and additions like Pumpkin Spice or White Chocolate Mocha.

And actually, you can make a frappuccino-style drink at home. You’ll need:

Making it is also super easy. Simply throw all the ingredients into a blender and blend until smooth. It should have a consistency a little chunkier than a milkshake.

If you don’t want a coffee drink, just don’t use the espresso and add a little extra milk instead.

Bottom line: A Frappuccino is a trademarked drink from Starbucks. While it’s slightly different from traditional frappes, it’s very similar.

Frappe vs Frappuccino: The Biggest Differences

Let’s get down to the nitty-gritty and look at some specifics, shall we?

Traditional frappes are made with instant coffee, and they have many variations around the world. Sometimes they have extra flavor, but any blended coffee drink could be a frappe. So the frappe simply has more variety.

2) Frappuccinos are specific to Starbucks

As I already mentioned, Starbucks has a trademark on Frappuccinos. That means no other shop can sell them. But they can sell the same thing and call it a frappe, so who’s the real winner?

3) Frappes are generally easier to make

To make a frappe, you don’t necessarily need a blender. Frappes can be made with a whisk. Whisking frappes is especially easy if you use instant coffee instead of espresso, which many frappuccinos are made with.

Instant coffee frappes are sometimes referred to as cafe frappes but don’t confuse them with iced coffee.

That’s right; there are many brewed coffee-free Starbucks Frappuccinos. They are simply made with cream instead of espresso. That makes them more like a milkshake than a frappe, though.

Frappes taste like sweetened coffee. After all, a frappe is a coffee drink.

But if you’re used to drinking Starbucks Frappuccinos, a frappe might surprise you. They aren’t exactly the same thing.

In my experience, frappes are less sweet (unless served with ice cream!) than frappuccinos. But don’t get me wrong, they’re still mighty sweet and more like a coffee milkshake than anything.

2. What is a McDonald’s frappe?

A McCafe Frappe (which is super fun to say) is very similar to Starbucks Frappuccinos.

The McCafe Frappes are sweet blended iced coffee drinks with either caramel or mocha syrup. Right now, those are the only two flavors available at McDonald’s. They are made with a little coffee and either cream or milk.

3. Is a frappe stronger than brewed coffee?

No, frappes are not stronger than brewed coffee. That’s because frappes are made with instant coffee, cream, sugar, and ice cubes instead of coffee beans and hot water.

Coffee will taste stronger because it isn’t blended with anything sweet.