Seafood is incredibly nutritious and rich in many vitamins and minerals. It’s also very versatile as there are many food options, such as fish, prawns, lobsters, and crabs. 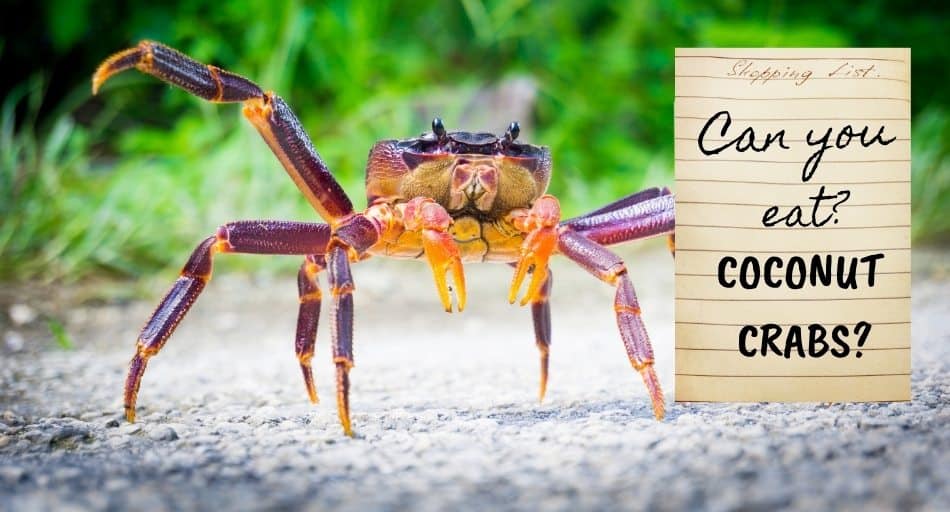 But, if you’re a seafood lover, you might be wondering if all marine animals are edible. For example, what about coconut crab? Is this large species of crab edible?

Can You Eat Coconut Crabs?

The coconut crab is considered a delicacy in many parts of the world, which means it’s edible. In fact, so many people eat it that it’s an endangered species now. But, unfortunately, this doesn’t stop people from hunting them down for their meat, as they’re still on many menus on islands in the Indian Ocean and the central Pacific Ocean.

RELATED Can You Eat Hermit Crabs? Everything Explained.

What is coconut crab?

The coconut crab is a species of terrestrial crab that many people consume as a delicacy in various parts of the world. People also consume it as an aphrodisiac on many islands, which means that this species is extensively hunted. In fact, it’s rarely found on islands inhabited by people since they eat it so much.

This type of crab can weigh up to 4kg (9 pounds) and reach 1m (3 feet) in length. This impressive size means that it has a lot of meat, which can feed many people. Due to its size, this animal also doesn’t have any known predators aside from other coconut crabs and humans.

Generally, coconut crabs eat fleshy fruits, nuts, seeds, and dead animals, making them omnivores. Their diet also plays an important role in how nutritious their meat is since they may consume certain foods, particularly seafood, which might make them poisonous and dangerous for people’s health.

As a result, it’s important to know where the crab is coming from and consume them only from trusted sources to avoid stomach issues and even death.

Just like all types of animal meat, coconut crab meat is very nutritious and rich in protein. This macronutrient helps you stay full after eating, thus preventing overeating and weight gain.

Eating a diet rich in protein is important to ensure good muscle mass and fuel your body after exercise. This nutrient is also responsible for keeping your energy levels up and preventing fatigue, so it’s important to consume many protein-rich foods.

The coconut crab is also high in essential fatty acids. These nutrients help promote brain health and reduce the risk of many cardiovascular health conditions.

Foods high in fatty acids might also reduce the symptoms of depression and anxiety, which is beneficial, particularly in colder, darker climates. As a result, consuming coconut crab meat might help you in several aspects of your health and even well-being.

Even though it’s very rich in nutrients, coconut crab – just like other crab kinds – is low in calories. In fact, a single 3-ounce serving of crab contains only 82 calories, most of which come from protein and only a small number from fat.

Because of that, eating crab meat, including coconut crab, may help you lose weight as it fills you up without giving you empty calories that have no nutrition.

Depending on the diet of the coconut crab, this meat type may be a wonderful source of essential minerals, including copper, zinc, selenium, and phosphorus. These nutrients contribute to good health and maintaining various bodily processes.

Because of that, it’s important to consume a diet that contains these minerals, even if in small doses, and coconut crab meat can help you reach these dietary goals.

All types of crab meat, including coconut crab, are particularly rich in vitamin B12. In fact, one 3-ounce serving provides you with more than 100% of your daily recommended need for this micronutrient. Vitamin B12 is responsible for keeping your blood and nerve cells healthy.

It also lowers the risk of heart attack and stroke and boosts your immune system and energy levels. Most seafood and animal protein contains a good amount of this nutrient, so it’s a good idea to incorporate these foods into your diet.

Which parts of coconut crabs are eaten?

With a taste similar to lobster and crabmeat, the most prized parts of the coconut crab are the eggs inside the female and the fat in the abdomen. These are also the most nutritious, so people generally consume these parts.

The coconut crab is most often fried or cooked using moist heat to preserve all the nutrients and flavors and served with various sides, depending on the region. Most recipes also call for coconut milk – which the crab is often cooked in – which pairs well with this type of meat.

Can coconut crabs be bad for your health?

While coconut crab on its own isn’t poisonous, it can be depending on its diet. Because of that, there have been cases of coconut crab poisoning, particularly if it consumed poisonous sea animals and plants that are harmful to humans but not to coconut crabs.

As a result, it’s important to consume coconut crab that comes from reputable sources that ensure the proper care of the crab meat. If not, coconut crab poisoning can be serious and dangerous for your health.

Coconut crabs also contain a lot of sodium. Consuming a diet rich in this mineral increases the risk of stroke and high blood pressure, so experts recommend controlling your sodium and salt intake.

Since most crabs and crustaceans contain a high amount of salt (mostly due to their diets), it’s important not to base your whole diet around this food group and include lots of fresh veggies that help balance the sodium levels in your body.

The coconut crabs are large crustaceans that many people around the world eat. Even though it’s considered a delicacy and an aphrodisiac, people have almost driven this type of crab to extinction by excessive hunting.

Nevertheless, the coconut crab is a safe food to consume as long as you eat it from a reputable place since cases of coconut crab poisoning have happened before. But if you follow safety guidelines, you should be able to enjoy this delicious type of meat.