The blue crab is a popular seafood that is harvested in Maryland, Louisiana, North Carolina, and Virginia. Served up in restaurants across the United States, they fetch a hefty price due to booming demand. If you’re considering buying some from the local fish market or it’s on the restaurant menu, you are probably wondering what does blue crab taste like? Is it worth the money? We are about to take a close look at this crustacean’s flavor, texture, and the best ways to eat it. Let’s get started.

A blue crab has white meat which has a mild, salty ocean flavor with a subtle sweet undertone. The backfin meat offers the prime morsel, which is delicate, flaky, and tender. It has the "feel" of a scallop, but the blue crab is certainly a unique seafood; its succulent, rich, buttery mouthfeel is hard to find in anything else dragged out of the ocean. The blue crab should have a mild aroma of the sea if it is fresh.

Soft-shell crabs are a type of blue crab that has recently shed its shell. They are harvested before a new shell has time to develop and harden. "Softies" are great eating and can be consumed shell and all. They provide a lovely crunchy texture. The shells lose their blue color and turn an orange-red shade once cooked.

A blue crab’s claws contain light brown meat which is prized for its nutty taste. Although they take a bit more work to eat, they’re well worth the effort.

Other sought-after parts of the blue crab include the roe, which makes an excellent garnish and is revered in Chinese cuisine. The flavor-packed spheres come from the female crab and turn bright orange after cooking. Also, the tomalley (aka “mustard”) is found in all blue crabs. It is the crustacean's fat, and it enriches the texture, bringing a delicious buttery feel to any dish.

Those that buy their crab meat pasteurized will notice darker meat with a firmer texture, compared to the fresh option. 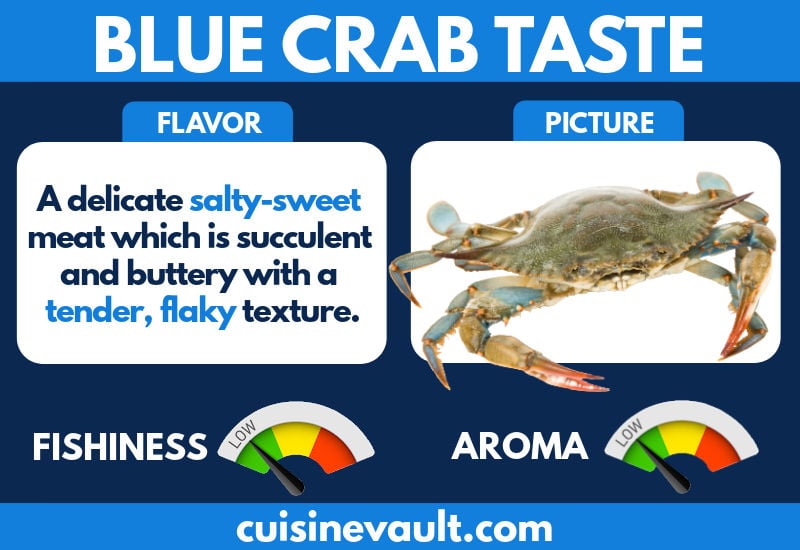 Male: Male blue crabs are called “Jimmys” and, like the females, have blue claws; however, they don’t have the red tips. The male grows to 8” (20cm) within one year and its meat is usually flakier in consistency than a female’s.

Female: The mature female crab is called a “sook” while the immature ones are “sallies”. Females can be identified by blue claws which have a red tinge at the tips. Their underside looks similar to the Washington Capitol Dome. A female’s body is generally smaller than males, with meat that is denser in texture. They are usually cheaper to buy than males at market. 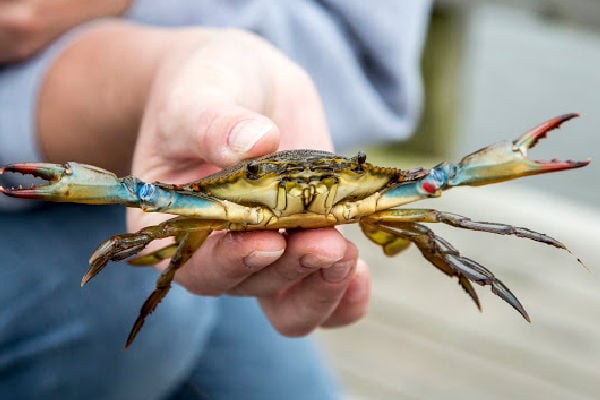 What goes with blue crab?

Blue crabs are a versatile seafood that can be used in a wide range of recipes. You can buy live crabs if you’re in the right area – they’re also sold frozen, cooked, as claws/legs, or meat picked from the shell.

Fresh, whole crabs are often boiled or steamed and eaten as they are, with dipping sauce. It can get a little messy, but this option is a great way to appreciate the meat’s flavor. Other delicious uses for crab include breaking up the meat and adding to salads, soups, sauces, casseroles, crab cakes, and chowders. Softshell crabs are excellent broiled, grilled, fried, or sautéed. Cook them on a high heat to crisp up the shells and pop them into a sandwich. 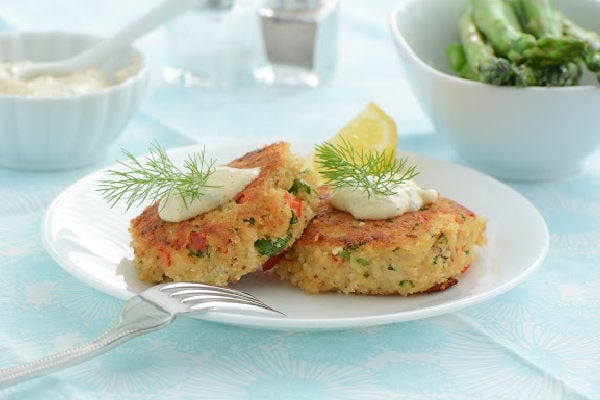 The heart of blue crab harvesting must be Maryland, home to arguably the best crabs in the United States. In this area, they need to hibernate which allows them to build up flavorsome fat stores. This provides the crab meat with an extra buttery flavor that is unique to Mayland.

These are a delicacy and are more challenging to source than the hard ones. The season runs from the middle of May through to September in Maryland. If you’re looking for bargain soft shells then try to buy them in May when they are typically at their cheapest.

The hard shell season in Maryland lasts longer than the soft shell’s, running from April to December. To get the best-priced crab that is an impressive size and fat-laden, buy from September to October.

Apron: The pointy flap underneath a crab that can be used to determine its age and sex.

Backfin: Backfin contains pieces of body meat that are finer in texture than lump meat. Cooks use them for adding to crab cakes.

Jumbo lump: Jumbo lump is a bright white color and is revered for its size, presentation, and taste. It is made up of two large muscles that connect the crab’s swimming fins. Lump is expensive and is excellent sautéed or used in fancy cocktails. 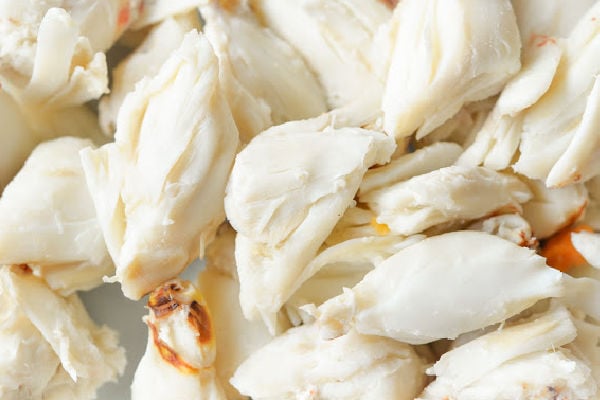 Mustard: Also known as tomalley, the mustard is crab fat and is present in all crabs. It ranges from white through to a yellowish-brown color, similar to dijon mustard. Processed crab manufacturers include mustard to enhance the product’s flavor.

Peeler: The name is given to crabs transitioning to soft shell crabs. They are preparing to molt their shell and can be identified by a colored line running down its paddling fin.

Sally: Adolescent female crabs that are also known as "she-crabs". They are not yet ready to mate and are relatively small, so often crabbers toss them back.

Sponge crab: Mature female crabs that must be thrown back in the water as they are carrying fertilized eggs on their abdomen.

Related reading:
What do scallops taste of?
The best Old Bay Seasoning substitutes.
What does an octopus taste like?
What do sea urchins taste like?

The blue crab is a much-prized type of seafood that provides delicious tender meat that is mildly briny, with a subtle sweet undertone. It makes good eating on its own and also pairs well with a wide range of other flavors. This crab is likely to appeal to most people as it has no offensive or overpowering taste. Added to a sandwich or dipped in butter, even kids and fussy eaters are likely to love blue crab.

What is your favorite seafood? Please let us know in the comments below.