I grew up having family in the Southern United States, so collard greens were a staple at my grandmother's house. To my surprise, not many people I've met have had collard greens or collards before. 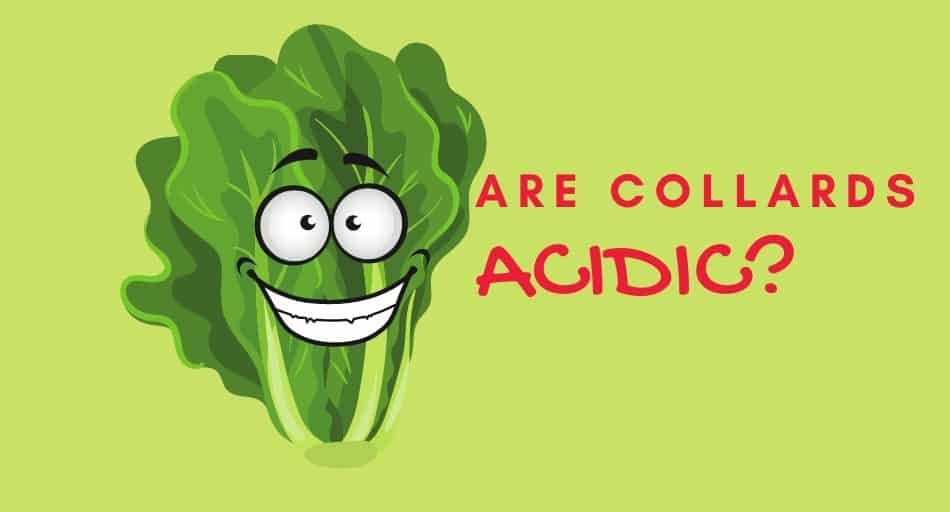 These leafy greens can be prepared on their own as a side dish or incorporated into meals where you need a leafy green like spinach, kale, or another leafy green.

Living with acid reflux disease isn't always the easiest, but knowing what foods are alkaline, acidic, or neutral can help you enjoy eating without those uncomfortable acid reflux symptoms. Are collards acidic?

Yes and no. The truth is that collards have a pH that can vary. Sometimes collards have a pH which is 6.5, technically classifying it as an acidic leafy green. Other times, its pH is over 7, making it neutral and almost alkaline.

Even when collard greens have a pH of 6.5, it's so close to having a neutral pH that it's hard to even say that they're acidic. Since the pH is barely acidic and more often than not, neutral, you shouldn't have a problem eating collards with acid reflux disease.

The pH of spinach is about 5 to 5.5, meaning it is mildly acidic but it is also close to the neutral level. Cooked spinach has a pH of about 6.6 to 7.2, so as spinach is cooked, it becomes more neutral. Spinach and other green veggies are good for your stomach and entire digestive system. Spinach is also low in fat and sugar which also helps to lessen stomach acid. Read more about spinach and acid reflux.

Kale has a high pH level of nearly 7. This makes it a very alkaline vegetable, suitable for a diet that's low in acidic foods. Kale is also alkaline-forming, helping to combat the symptoms of acid reflux and GERD. The pH level of kale depends on the method of preparation.

Cooked and steamed kale has the highest pH level (even though the difference isn't drastic). However, it's also important to remember that cooking strips the vegetables of their nutrients.

Bok choy is slightly acidic, but it is very close to neutral on the pH Scale. Bok choy has an average pH of about 6.5 to 7.0, meaning that while it is on the acidic side, it is also very close to being neutral.

Since bok choy is a member of the cabbage family, it has a similar pH to other types of cabbage- red cabbage usually has a pH of about 7.0, while green cabbage has an average pH of about 8.0.

Cabbage isn't an acidic vegetable. In fact, it has alkalizing properties, which means that it can help reduce acid levels in your body once ingested. Cabbage has a pH level ranging between 5.50-6.75. This makes it one of the least acidic vegetables and safe to consume on a low-acid diet.

What's more, this veggie doesn't become more acidic in your stomach and can even help in excess acid absorption.

Collard Greens are Good For You

As with other leafy greens, collards are great for you! As with anything, how you prepare them can make the dish not great for you, but at their core, collard greens are fantastic for you.

Collard Greens are rich in nutrients that our bodies need, including vitamin K, vitamin B6, vitamin A, vitamin C, iron, magnesium, and calcium. When you prepare collard greens in a healthy way, they come with several health benefits. Since collards are loaded with fiber, eating them can do wonders for improving your cholesterol and blood pressure.

Collards are also rich in sulfur like other leafy greens, and there are studies that show these foods may help reduce your risk for certain types of cancer.

One study conducted showed that in 3,000 women who ate cruciferous veggies lowered their risk for breast cancer.

The Origin of Collard Greens

It's safe to say that in the United States, people associate collard greens with the South and the African slave trade. While it's true that collards made their way to the American South when slaves were brought from Africa, collards don't have origins in Africa.

Historians can date the consumption of collard greens back over 2,000 years. While people mostly associate these leafy greens with Africa, they have roots in Ancient Greece.

There's plenty of evidence that people were cultivating and consuming collard greens in Ancient Greece.

Some other foods that are close to a neutral pH level include:

Where's the Most Collard Greens Produced?

While collards are popular foods in Africa, Europe, South America, and the United States, none of them are responsible for the most collard production in the world.

China and India take the cake for first and second place when it comes to collard production in the world.

Collards are grown throughout many areas of the world. Without counting China and India, the countries or regions that produce a lot of collards as well as consume a lot of them include:

If you're looking for some ideas of how to eat more collard greens, I've gathered four of the greatest collards recipes from the United States, Ethiopia, Greece, and Liberia.

To start off, let's look at a traditional Southern collard greens recipe. Before you get too excited, I'm not saying that this is the healthiest option, but it's dang tasty and perfect for Thanksgiving, a potluck, or when you're craving some comfort food.

You'll need some vegetable or cooking oil, smoked ham hock or bacon, onions, salt and pepper, garlic, red pepper flakes, and chicken stock. You'll chop up your ham hocks or bacon and onions and add them to a pan with oil.

You'll cook them down for a few before adding a large bunch of collards and chicken stock. You'll let it simmer for two hours, so the flavors are vibrant. Don't forget to season to taste as you go.

Ethiopian collards, also known as Ye'abasha Gomen, are different from Southern collard greens recipes. You can also use this recipe with kale if you ever want to use a different leafy green. You'll need plenty of collards, onion, Niter Ethiopian Spiced Butter or cooking oil, ginger, garlic, paprika, cumin, cardamom spice, chili pepper, or cayenne pepper, and fresh lemon.

You'll add oil, butter, or cooking oil, garlic, chili pepper, ginger, and the rest of the seasonings to a skillet. After a minute, you'll add the collards and onions and let them cook for about ten minutes.

You'll leave the grease in the pan and add the rest of your ingredients. You'll only need to cook the collard greens for about five minutes before it's ready to serve.

Now let's look at Liberian collard greens. I'm not going to lie, the ingredient list for this recipe threw me off, but sometimes the unique ingredients are what makes a dish so special and tasty.

While this happens, you can boil your collard in water and chicken bouillon. You'll boil the greens for about ten minutes before adding in your peanut butter and other seasonings.

You'll then add the bacon and let it all simmer for about two hours before serving. The longer you simmer the collard, the more tender they'll be.