Cantaloupe is one of the tastiest fruits and is easy to add to any fruit salad. These orange melons are juicy and give you a nice boost of natural sugar. A lot of fruits taste sweet but surprisingly have an acidic pH. For example, strawberries are acidic even though they taste super sweet. 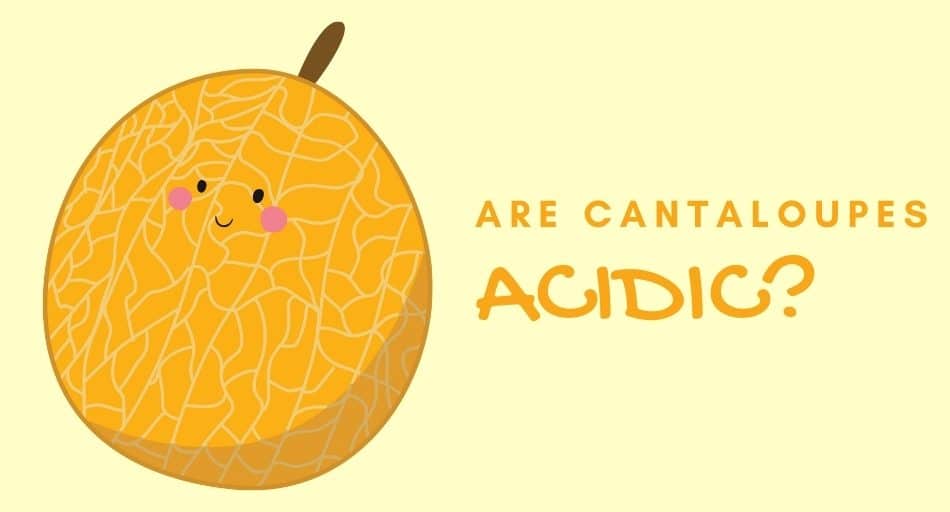 Other fruits like lemons and limes taste like they're acidic, and they are. But what about cantaloupes? If you're sticking to a low-acid diet, can you eat cantaloupe melon?

Much like other fruits, cantaloupe is an acidic fruit. But before you get up to throw away all the cantaloupe in your fridge, this fruit isn't nearly as acidic as you may think. Since the acidic side of the pH scale runs from 0 to 6.99, anything closer to 6.99 is almost neutral. Cantaloupe has a pH of 6.1 to 6.5.

This pH rating technically classifies cantaloupe as an acidic fruit, but since the rating is very close to 7, which is neutral, it's minimally acidic.

As with most fruits, cantaloupes are great for you. These melons are rich in folates, beta-carotene, vitamin C, potassium, and fiber.

Cantaloupes are rich in beta-carotene, which is a type of carotenoid. Essentially, this is a pigment that some veggies and fruits have. Once you eat something with beta-carotene, it converts to vitamin A. Vitamin A is a great antioxidant that helps fight off attacks within your body.

Vitamin C is helpful in not only improving your immune system and fighting off colds, but it can improve the production of collagen, muscles, cartilage, and blood vessels within your body. Cantaloupe has almost as much vitamin C as an orange.

One large orange has over 100% of the recommended daily intake (RDI) of vitamin C, while one cup of cantaloupe has roughly 100%. Consuming food that's rich in vitamin C can potentially help with asthma, diabetes, cancer, and how long your symptoms will last with the common cold.

Cantaloupes cannot prevent you from developing cancer, but there are some studies that show it can help reduce your risk of developing oral and lung cancer.

You may know folate as vitamin B9. This vitamin can potentially reduce your risk of developing certain types of cancers, memory loss due to aging, and preventing birth defects such as spinal Bifida.

Can I Eat Cantaloupe With Acid Reflux Disease?

You should always talk to your doctor first before trying acidic or somewhat acidic foods with acid reflux disease. But since cantaloupe is barely acidic and its pH rating is closer to neutral, you'll most likely be found when you eat this fruit.

Now, if you consume an excessive amount of it in addition to other acidic foods and beverages, you may experience adverse symptoms.

Where Did Cantaloupes Originate?

It's always interesting to learn the origins of some of your favorite fruits and veggies. Humans have eaten cantaloupe for centuries.

It's said that cantaloupe melons originated in India and the Middle East, but most people know that cantaloupes have been growing in the Nile River Valley in Egypt for as long as we can date back. It's well known that ancient civilizations used to eat this fruit, especially the Ancient Romans and Egyptians.

Cantaloupe melons didn't arrive in Europe until the 15th century, and then the United States until much later. It's said that Christopher Columbus was the one who brought cantaloupes to what is now the United States.

It became a very popular fruit throughout Europe because of how sweet it is. Even though this melon has roots in Africa and the Middle East, its name comes from a town in Italy where they were originally cultivated in Europe. Cantaloupe melons were cultivated in Cantalupo, Italy, in the 17th century.

Where are the Most Cantaloupes Produced?

You can buy cantaloupes in most grocery stores around the world, but where are the majority of these melons grown? As one of the largest countries and largest exporters of goods in the world, it's not a surprise that China is the leading producer of cantaloupes.

How to Pick the Perfect Cantaloupe

With most fruits and veggies, you'll choose ripe ones based on their appearance. When you're at the store or farmer's market and interested in picking a cantaloupe to bring home, you'll want to use your sense of smell and not how the melon looks.

All you have to do is hold the cantaloupe up and give it a good smell. If it smells very sweet, it's ripe and ready to be eaten. Of course, all the melons will be ripe at a grocery store, but going with one that has the sweetest smell is the way to go.

It's always fun to expand your knowledge about seemingly random things. Here are some of the best and most interesting facts about cantaloupe melons:

How Many Varieties of Cantaloupe Melon Are There?