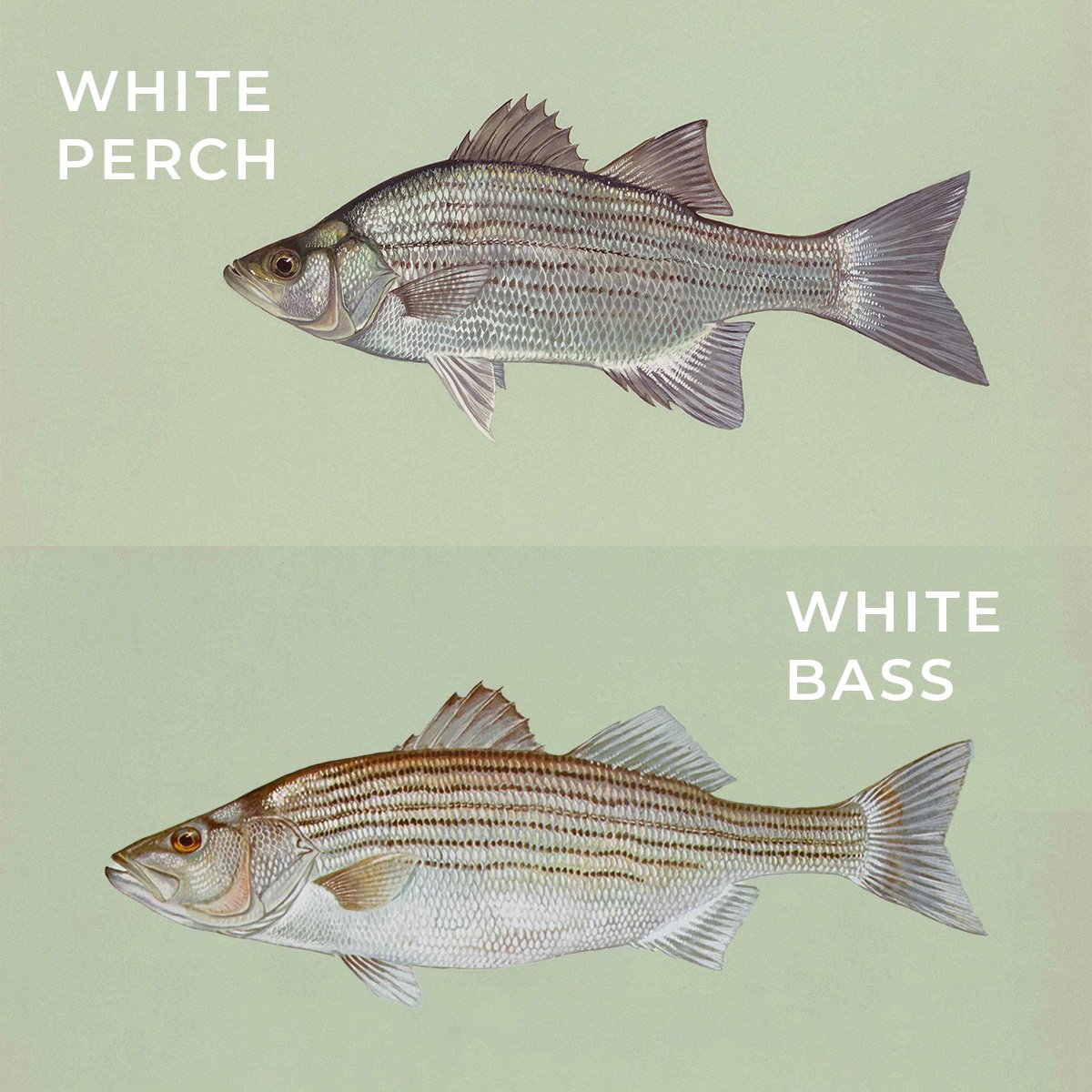 Although these two fish species may look alike, they have differences in shape, size, flavor, habitat, diet, and nuisance factor. Read on for detailed information regarding their differences.

What is the difference between a white bass and a white perch?

The white bass is a freshwater fish that usually ranges from 10 to 12 inches in length. It is deepest at the dorsal fin and has up to ten faint stripes running horizontally along its body. It is piscivorous, feeding on other fish such as sunfish and silversides. A white bass has an overwhelmingly fishy flavor, and many anglers consider this fish unpleasant to eat.

On the other hand, the white perch can live in fresh or saltwater and is a smaller fish than the white bass, ranging from 5 to 7 inches in length. This species has a body that is deepest in front of the dorsal fin and has no stripes. The white perch is omnivorous and feeds on larvae, fish eggs, and flies. It is a mild and sweet-flavored whitefish that many enjoy.

RELATED Spotted Bass vs. Largemouth Bass: All Their Differences

White bass: Most anglers don't like the fishy taste of white bass, which is very strong. They are high in oil content and are best compared to crappies. To reduce the strong taste, it is recommended that the red flesh along the rib cage be removed before eating.

White perch: The white perch has deep pink flesh and is lean, flaky, and moist in texture. The flesh, once cooked, has a sweet, mild flavor and is prized in the fishing community.

White bass: The deepest point of a bass is directly under its dorsal fin. It has around six to 10 faint stripes running horizontally along its body, and they usually measure 10 to 12 inches in length. Next time you think you've caught a white bass, lift up its dorsal fin. If its tail fin also lifts up, then you have another species on the line! With bass, the two fins are not connected.

White perch: The perch has a body that is deepest in front of its dorsal fin. You won't see any stripes running along its body, and it will measure roughly 5 to 7 inches in length. If you lift the fish's dorsal fin, you will find that the tail fin also raises as the two are connected.

White bass: Adult bass are piscivorous, meaning they feed on other fish. Common favorites include shad, silversides, and occasionally young sunfish. If you're out fishing, then they'll bite on minnows, worms, or other live bait.

White perch: Perch enjoy dining on the eggs of various native species of fish, including the walleye and other true perches. They will also feed on fatheads or mud minnows.

RELATED Walleye Vs. Bass: What Is The Difference?

White bass: A white bass is a freshwater fish that enjoys cool, deep, clear water with lots of space to prey on other fish. They are usually found in ponds, rivers, lakes, or reservoirs.

White perch: Perch can live in fresh or saltwater. Those that live in freshwater prefer a lake or pond. Coastal streams and brackish estuaries are common habitats for saltwater white perch.

RELATED What Does Sea Bass Taste Like? Full Review

White bass: The white bass is not considered an invasive species and are sometimes stocked in reservoirs to control gizzard shad populations.

White perch: Perch are considered a nuisance in some states as they destroy fisheries. They feed aggressively on baitfish eaten by other species. They are responsible for serious declines in the populations of white bass, yellow perch, and walleye. Some states recommend that anglers not "catch and release" white perch to help control their numbers. In various states, laws also forbid the possession of live white perch.

RELATED Sailfish vs. Swordfish: All Their Differences

Anglers could be forgiven for mixing up white bass and white perch. They are very similar-looking fish, both found in the United States and Canada. The easiest way to tell them apart is to simply look for the stripes on their bodies. If you can't see any, then it's likely you have a perch; if you see 6 to 10 stripes then it's more likely you have a white bass. Keep in mind that a bass is also roughly double the size of a white perch. Cross your fingers that you have caught a white perch because this fish is considered very good eating; conversely, a white bass is loathed by many people due to its extreme fishiness.

Have you ever tasted a white perch or a white bass? Please let us know what you thought of their taste in the comments below.