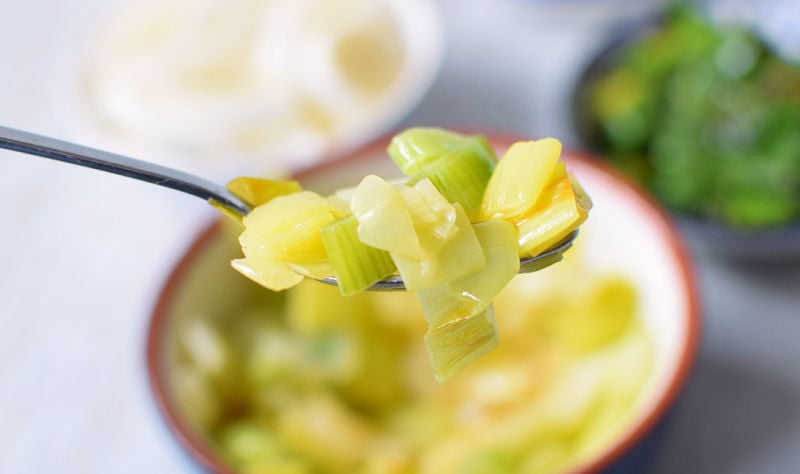 Leeks are part of the allium family that includes vegetables like onions, chives, and shallots. Looking at that line-up, you’d expect leeks to have a similar punchy flavor. In fact, you'll get a different flavor depending on which part of the leek you eat and how it is cooked. We decided to create the ultimate leek taste guide to cover all the bases.

The leek has an earthy, sweet flavor with a mild oniony undertone. Its delicate flavor profile is less astringent but more complex than a regular onion. You’ll find that leeks vary in flavor and texture depending on what part you eat and how they are cooked.

Quick tip: Check out our list of leek substitutes if you want to get an idea on what vegetables taste similar. 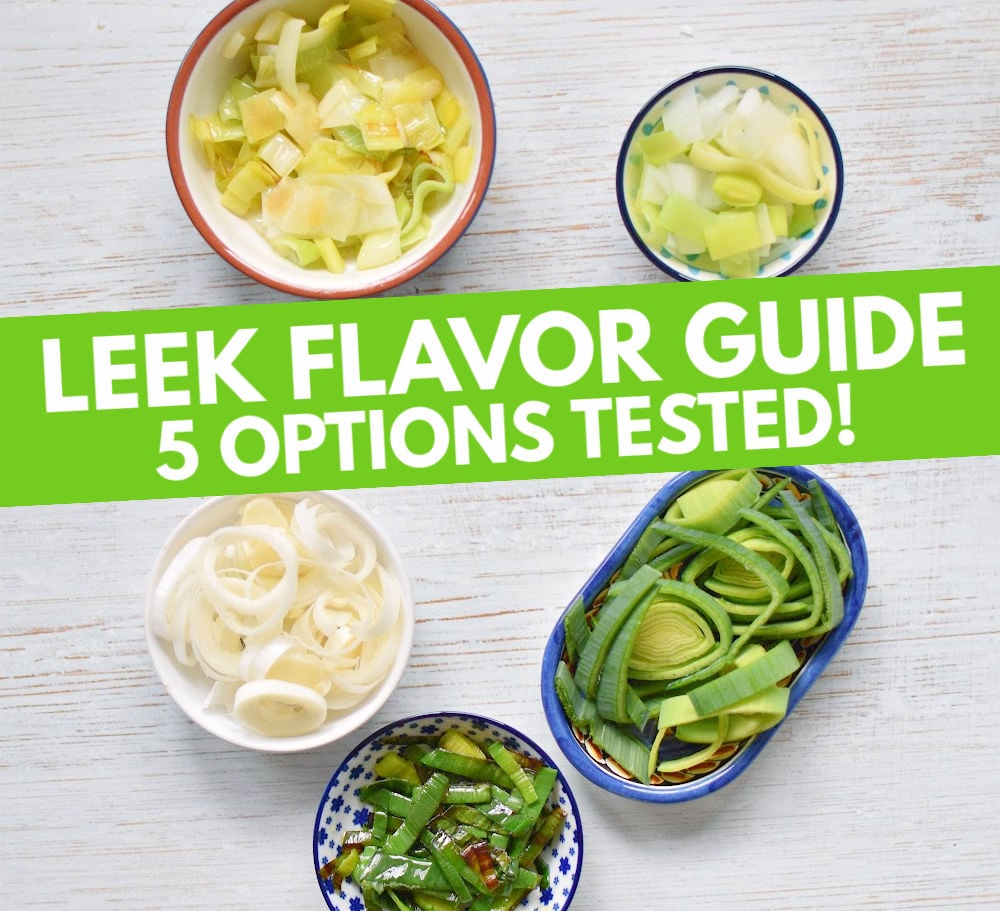 It’s okay to eat raw leeks. They have a grassy, herbal taste with a firm, crunchy texture. We tried eating a whole white stem and found the first two bites were refreshing, cool, crisp, and sweet. After a third mouthful, the onion taste intensified and wasn’t enjoyable. Like a hot curry, the flavor creeps up on you.

Best use: Thinly sliced rounds for burgers, sandwiches, and salads. You’ll get an onion taste without the bite. 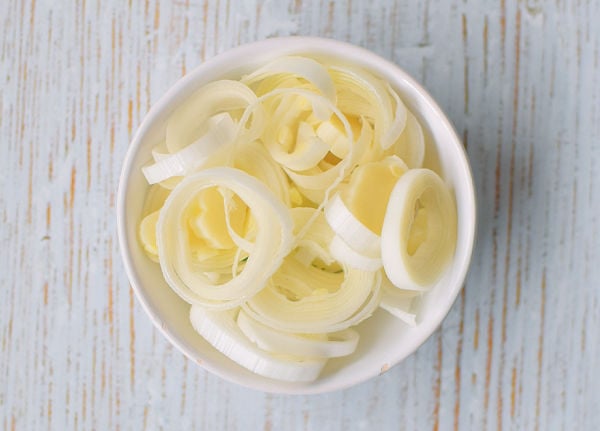 Once cooked, the leek becomes sweeter with a softer onion taste. You can eat a whole plate without the onion intensity. Like any vegetable, its texture becomes softer and more palatable, with a slight squeak as you chew them. Cooked leeks also release a subtle savory aroma.

Best use: Perfect for a quick and easy side dish that’s super-healthy. 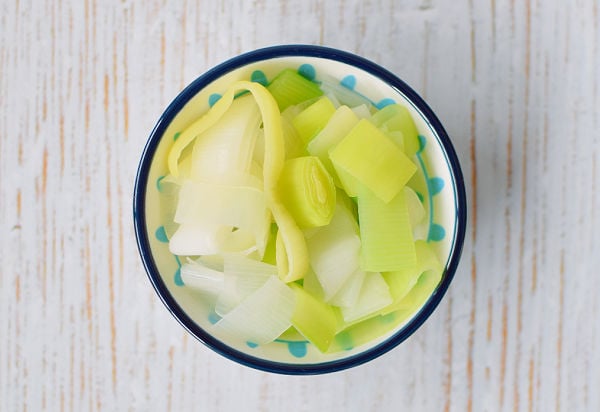 Frying or sautéing leeks in olive oil or butter is one of the best ways to cook them. The sugar in the vegetables caramelizes deliciously, and their texture turns silky and buttery with a creamy mouthfeel. They’re a little like fried zucchini, only less mushy.

You can also roast or braise leeks to get a similar crispy exterior. Sprinkle them with salt, pepper, and herbs like rosemary and thyme.

Best use: If you’re okay with a little extra fat content, frying leeks is the best way to cook them as a side dish. 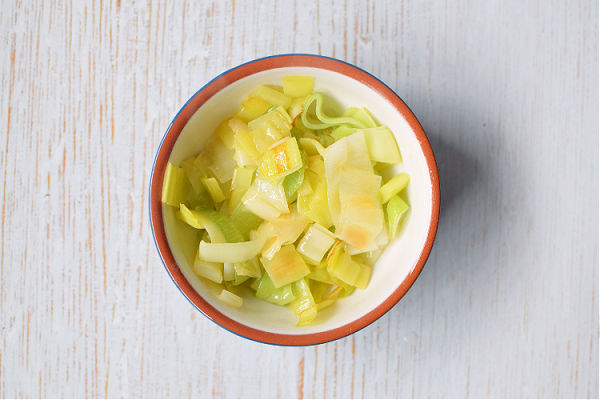 Most cooking websites (including us) advise cutting off the tough, thick leaves and discarding or using them in stock. We decided to live on the wild side and fry them in olive oil.

Our expectations weren’t high for these leaves that have been shunned, avoided, and condemned in many kitchens. So, when the first mouthful tasted as good as the stem, just a little crispier, it was a mind-blowing moment. They weren’t tough and the flavor was a little stronger than the stem, but still quite tasty.

Best use: Chop the leaves very finely and fry on high heat until crispy then use as a garnish. They’d be amazing on fried rice or sprinkled over potato and leek soup with some bacon bits. 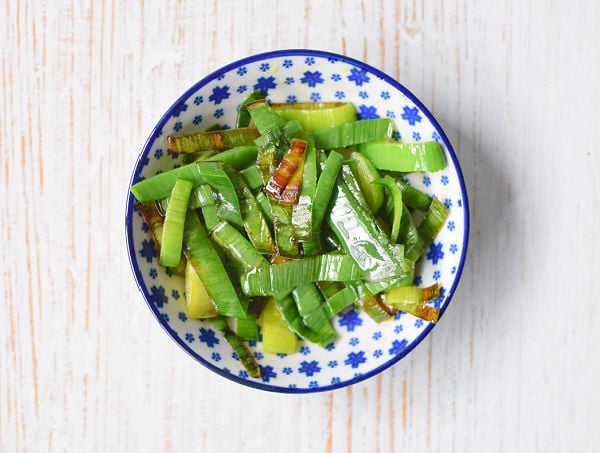 The dark green leaves of a leek have a little more flavor than the stem and are also tougher. If you sliced them thin enough, they’d be okay for a salad. Keep in mind older leeks will develop tougher leaves so you’ll want to check them before adding to recipes.

Best use: Slice very thinly and use in salads or use as part of a bouquet garni.

Quick tip: If we’ve convinced you that leeks are worth eating, you may get excited and buy too many. To deal with an oversupply, check out our guide to freezing leeks. 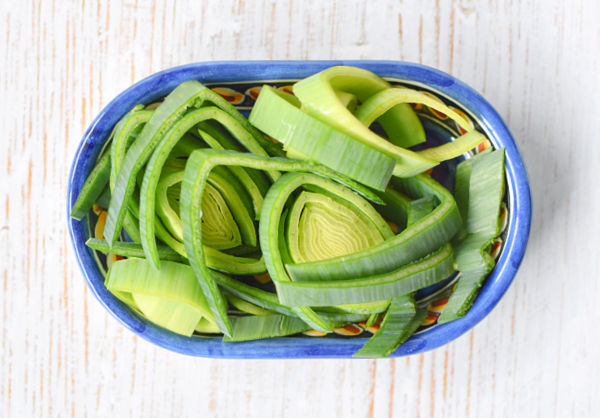 What is a leek?

Leeks are part of the onion family and are also related to the elephant garlic. They grow a perfectly cylindrical stalk partially above the ground that has many layers that are densely wrapped. They are a versatile ingredient in the kitchen, excellent cooked as a side dish or used to build depth of flavor in dishes like tuna pie or soup.

What’s the difference between a leek and a green onion?

Leeks look a lot like a large green onion, but they’re much milder and significantly larger. Green onions are perfect as a finishing touch to food like potato salad, omelet, dips, deviled eggs, and soups. Leeks on the other hand are often used as an aromatic ingredient at the start of the recipe. They are also useful for adding bulk to a dish.

Are leeks good for you?

Leeks contain a range of nutritional benefits including a high level of vitamins A, E, and K, as well as fiber. They are also a rich source of flavonoids such as kaempferol which is a useful antioxidant for the human body. Source. Leeks have been shown to balance hormones, boost the immune system, and assist digestion.

As with all vegetables, the way leeks are cooked will impact the nutritional goodness. Look for fresh leeks that have been recently picked - steaming, boiling, or eating raw is a good way to get the most health benefits from them. Also, keep in mind that frying leeks in butter will increase your daily fat intake. 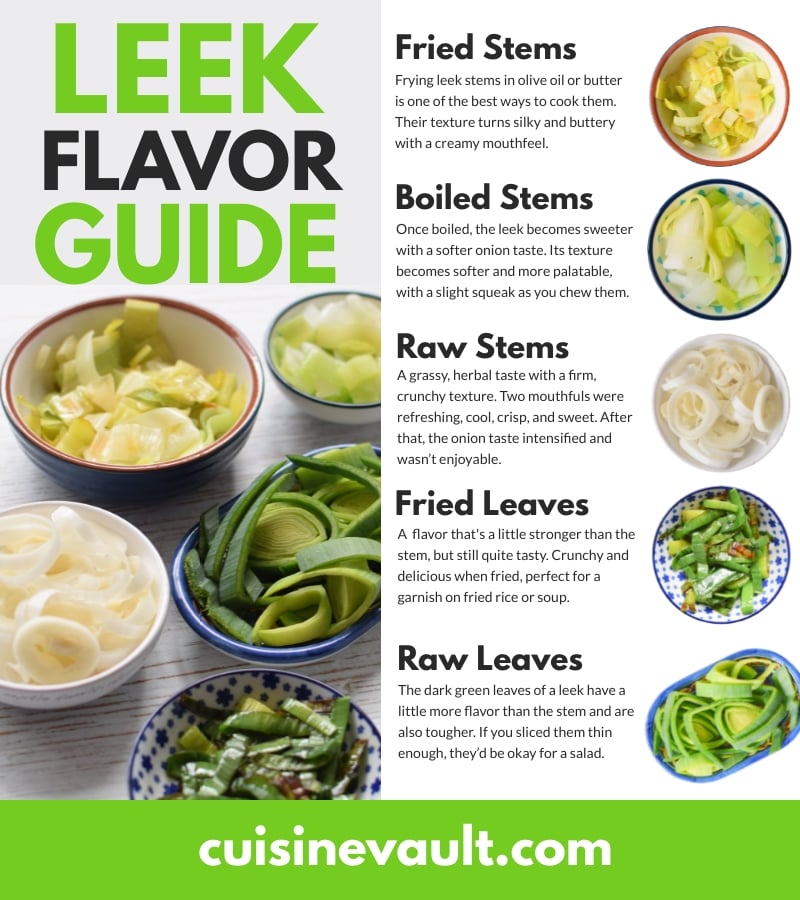 Leeks have a subtle onion flavor that becomes even milder once cooked. Frying them results in a mouth-watering silky texture and caramelized edges.

These vegetables are well worth growing in the garden or adding to your weekly shopping list. They’re such a versatile ingredient, great for using as a base ingredient to build flavor, or used as the hero of the dish, like in chicken, mushroom, and leek pie.

Another reason you might want to buy leeks is they’re low-waste. You can use the whole vegetable with almost none of it needing to be tossed out. Also, chopping a leek is easy and there are no tears like you get from onions.