If you’ve got a stack load of leeks from the garden or your local store, you’ll need a game plan to avoid any wastage. There’s only so much potato and leek soup you can eat in one week. A good option is to freeze them for times when they’re scarce. Keep reading to get our step-by-step guide on how to freeze leeks the right way.

Are leeks suitable for freezing?

Leeks can be frozen for up to 10 months before they start to lose their quality. You’re best to trim, slice, and blanch them before freezing to lock in the color and flavor. If you’ll use them in the next 2 weeks, then refrigerate in the vegetable crisper until needed.

How to freeze sliced leeks

If you’re going to freeze leeks then trim, clean, and chop them first. It’s a little extra work upfront, but it’ll make like easier when it comes time to use them.

The process of leek freezing is simple, but you’ll need a few everyday kitchen items to make your life easier.

Using a sharp knife and chopping board, trim off the stalk and discard. Slice off the tough green leaves and toss them out or save for making stock another day. 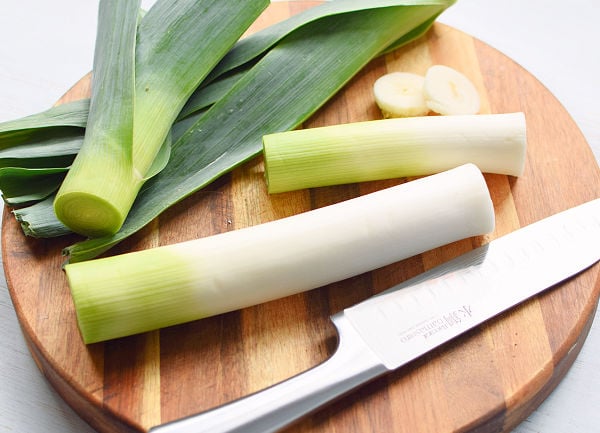 Prepping a leek is quick and easy.

Give the stems a quick rinse to remove any dirt. Be sure to check around the base of the leek as dirt often gets stuck between the layers.

Chop the leeks into ½ inch rounds or a suitable size for the recipes you’ll likely use them in.

Fill a large pot with water and bring to a boil. Transfer the prepped leeks to a colander and carefully lower them into the water. Allow the vegetables to blanch for 30 seconds then remove and place them in a bowl of cold water. This is essential for stopping the chopped leeks from cooking too long. 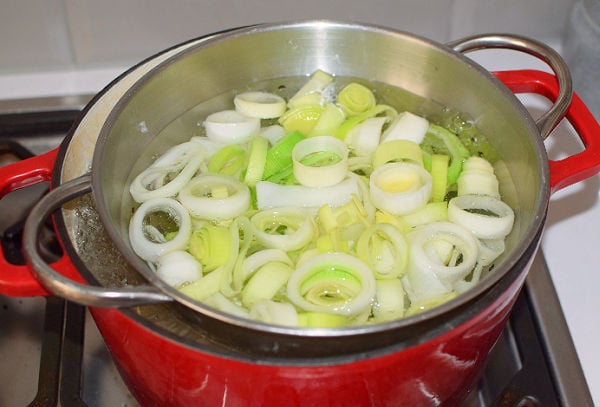 After the leeks have cooled, lay them on a clean, dry tea towel or a layer of paper towels. Dab them dry, taking care to get rid of as much water as possible. The drier the veggies, the better the texture when it comes time to use them.

Although not essential, initially flash-freezing leeks in a single layer will stop them freezing into one solid clump.

Check the freezer and make sure there is sufficient space for a baking sheet. You may need to move stuff around to set up a level surface for the tray.

Line a baking sheet with parchment paper then lay out the leeks in a single layer. Transfer them to the freezer and allow one hour for them to partially freeze. 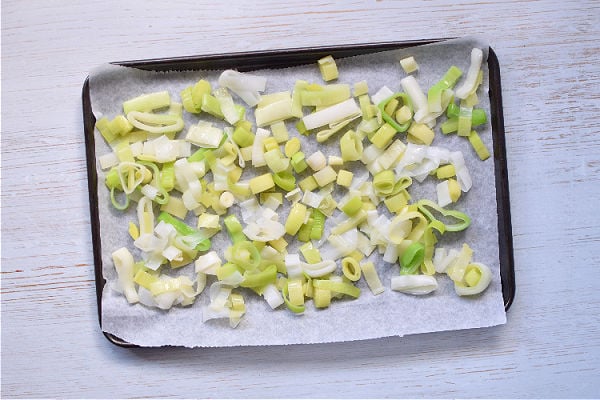 Try to make one layer of leeks.

Now that the leeks have been flash frozen, they’re ready to be packed. First, label the bag or container with vegetable name and current date. You’ll thank yourself for taking the time to label the bag in a few months.

Pack the leeks into portion control size amounts if possible, taking time to remove any excess air. Seal and place at the back of the freezer where temperature fluctuation is less.

Place the bag at the back of the freezer.

Can you freeze leeks whole?

Leeks can be frozen whole, in freezer-proof bags, for up to ten months. You’ll want to trim off the stalk and leaves to save space in the freezer. When it comes to convenience, slicing leeks up before freezing is a better method. You’ll be able to toss them into food frozen, while whole leeks will need to be defrosted before chopping. 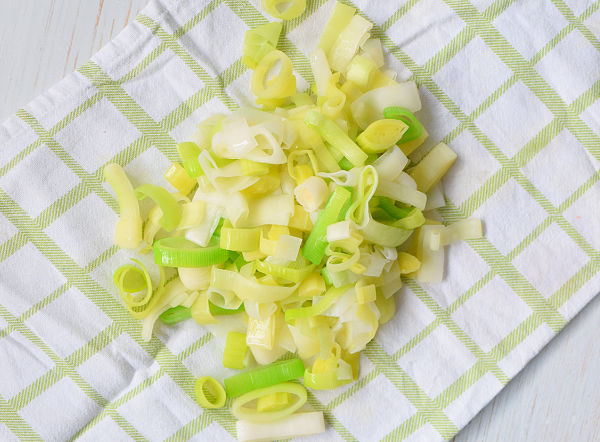 Remove all water before freezing.

How to defrost leeks

Leeks that have been chopped before freezing can be defrosted by leaving on the countertop for around an hour. However, in many recipes this step isn’t required; instead, add them straight from the freezer to your food.

If you’re cooking leeks on their own as a side dish, then add them to boiling water for 5-10 minutes, depending on the quantity.

Frozen leeks can also be sautéed in a pan with butter or oil. Be careful not to cook them on high heat as they’ll end up cold on the inside while overcooking on the outside.

Related leek advice:
What does a leek taste like?
What are some handy alternatives to leek?
How do I make chicken, mushroom, and leek pie?
What’s the best way to chop fresh leeks?

Can you refreeze leeks?

It is best to only freeze leeks once as you’ll find the texture of the frozen vegetables degrades with multiple freezes. However, if you use frozen leeks in a dish that gets cooked, it is fine to freeze any leftovers.

Do leeks have to be blanched before freezing?

Leeks can be frozen without blanching, especially if you’re going to use them in the next two months. If you think it’ll be longer or you want better quality leeks in your recipes, then take the time to blanch them first.

Can you freeze wild leeks?

Wild leeks are great for freezing and will last at least 3 months if stored in an airtight container or freezer bag. Give them a rinse under the tap then dry thoroughly before packing. They can be frozen whole or sliced up first.

Can you freeze leek and potato soup?

Soups are one of the best foods for freezing and potato leek soup is no exception. Allow the leftovers to cool then pour into a suitable freezer-safe container. Your soup will last 2-3 months if stored properly.

Can you vacuum seal and freeze leaks?

Vacuum sealing leeks is a fantastic way to keep leeks fresh longer when freezing. A sealer will reduce the chance of oxygen getting to the veggies.

Can you store leeks in sand?

Leeks are a good vegetable for storing in the sand. Allow them to sit in a dry place for two days before storing them in a ventilated box lined with damp sand. Layer sand over them, before adding another level of leeks. Repeat with more layers of sand if needed.

Do leeks need to be refrigerated?

Although refrigeration is the recommended method of storing leeks, they can also be left in a cool, dry place like the pantry for 2-3 days.

Other freezer related topics:
How to freeze pudding?
Is it okay to freeze bagels?
How do I freeze oranges?
Guide to freezing bananas?

Say goodbye to food wastage and hello to efficient vegetable storage. Freezing leeks is super-easy and the flavor and texture won’t go downhill. The one caveat is that blanching them first is an important step if you want to keep them long-term.

Half of the battle is making sure the leeks don’t get freezer burn. To avoid this, use a bag or sealable container that won’t let air in. A vacuum sealer is a great tool that’ll prolong the life of your vegetables.