Leeks have a unique flavor that’s like an onion, only milder and sweeter. Although they’re a fairly common vegetable, you may be allergic to them, or your local grocer could be out of stock.

If you're looking for a replacement then your search is over. We’ve created an essential list of leek substitutes so that you can finish meals without them. Let’s see which is best for you.

What can I use instead of leeks in a recipe?

To replace leeks in cooking use shallots as your best option; they have a similar sweet, mild flavor. Onions or scallions will also work but keep in mind they have a stronger flavor. People allergic to leeks and other vegetables in the allium family can use celery or fennel. 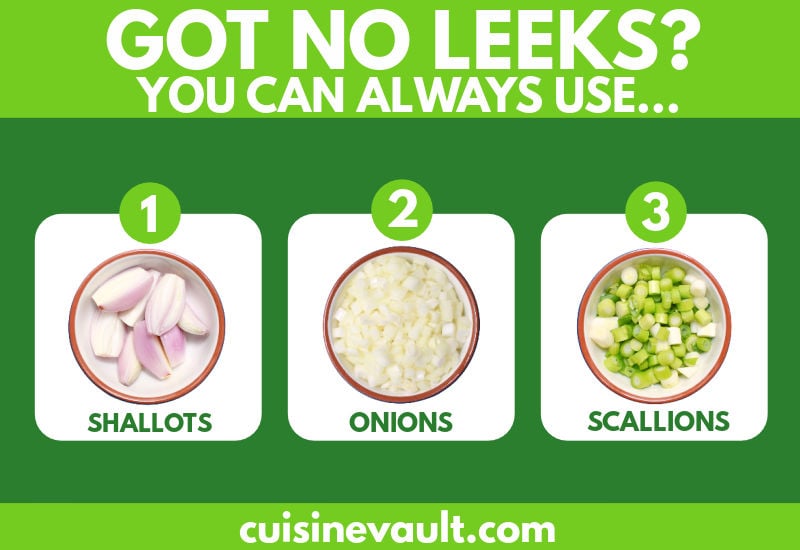 In most cases use equal amounts of the substitute as you’d use leek. It’s handy to know that one medium leek is equivalent to 1½ cups of chopped vegetables. That means, if a recipe calls for one leek, replace it with 1½ cups of shallots, onions, or whatever replacement you choose. For pungent ingredients like ramps reduce the quantity.

Slicing shallots thinly will provide a good alternative to leeks. These vegetables are a small onion variety with a flavor profile that’s closer to a leek than a regular yellow onion.

Shallots have a more complex, sweeter flavor than leek and will add a hint of garlic. But they’re also mild and will work nicely in a casserole or tart.

You’ll find shallots are a perfect way to add hearty flavor to risottos, tuna bake, and soups. Use at least four shallots to replace one medium sized leek. 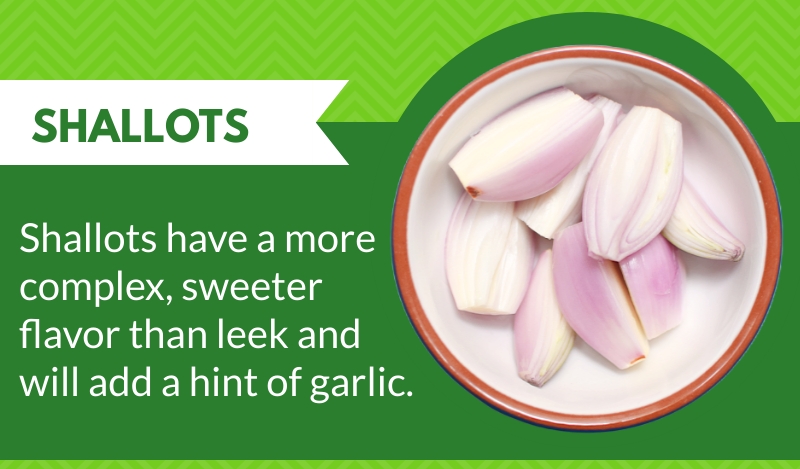 Onions taste great in most dishes that call for leeks. You can use them in your next chicken, mushroom, and leek pie, traybake, or savory muffin recipe. However, onions have a stronger flavor with less complexity than leeks. Some varieties make better replacements than others.

Sweet onion: A sweeter variety without the sharp bite that regular yellow onions hit you with. They're excellent for caramelizing thanks to a high sugar content. Sweet onions are suitable for roasting, salads, onion rings, or sandwiches. Also consider pearl onions or red onions.

White onion: This type of of onion is much sweeter than an everyday yellow onion. We bought a bunch for comparison and found that they were quite mellow. In fact, eating slices raw was quite enjoyable; however, they lack the savory taste that leeks bring to slow-cooked meals.

Yellow onion: Also known as a brown onion, they’re a common, low-cost variety, easily found in stores. They’ll need some decent cooking time to tame their astringent, oniony punch. You may also want to try Spanish onions, a type of yellow onion that has a more delicate, sweeter flavor than a regular yellow onion.

Ramps: Ramps are a type of wild onion that go by a range of names including wild leeks. They’re a stronger, oniony version of the leek, with a pungent garlicky flavor. They’re probably a better replacement for scallions, but if you have them, they'll do the job. Tip: Chives are easier to find and provide an onion and garlic flavor to food. Use one quarter the amount of chives as you would leek.

Related reading:
Discover the most popular types of onions in cooking.
Learn how to dice an onion the right way.
Find out the best way to slice onions.
How do I roast elephant garlic?

Scallions are a handy leek substitute although they pack some extra oniony flavor. Depending on their maturity, they’re also known as green onions or spring onions.

No matter where you live, most grocery stores stock scallions and they're usually a reasonable price. 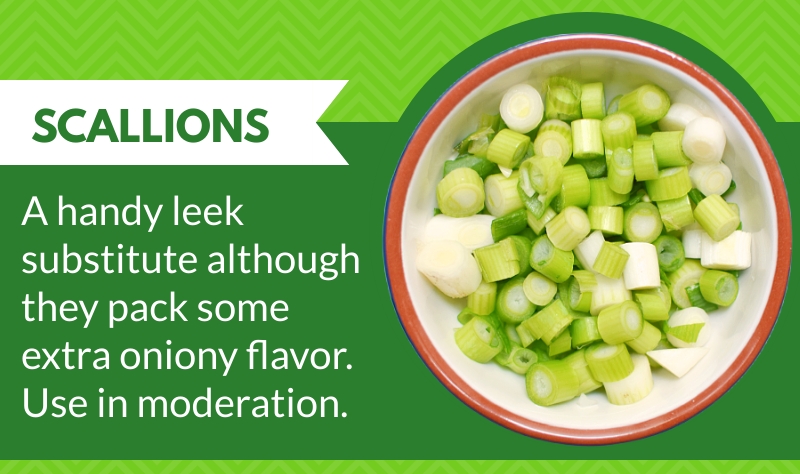 We suggest reducing the quantity by half if you don’t want an onion festa. Use the white and light green parts of the scallion but avoid the dark green stalk.

Celery and leek are like chalk and cheese. But if you can’t eat vegetables from the allium family, like leeks, then celery is your best bet. It’s handy for adding depth of flavor and bulk to sauces, casseroles, and soups.

Although you can use the same amount of celery as the recipe calls for, it isn't essential. If you want to add an extra cup it won't overwhelm the other ingredients. 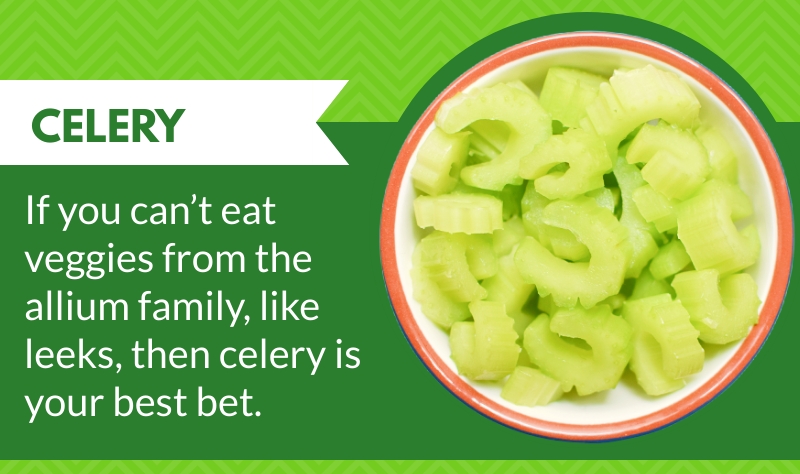 Like celery, fennel will offer a different flavor to leek. It has a fresh anise-like flavor. Use fennel if you don’t enjoy the taste of leek and want something a little different.

Compared to most members of the allium family, fennel is mild and fresh. If you're looking for a substitute for leek sausages then fennel is a great choice. What if you’re off-grid some place with no fresh vegetables? Onion powder is a useful replacement for adding some umami flavor to your dishes.

You’ll need to add one teaspoon of the powder to replace one cup of raw chopped leek. Don’t expect the same depth of flavor that comes from fresh leeks though. 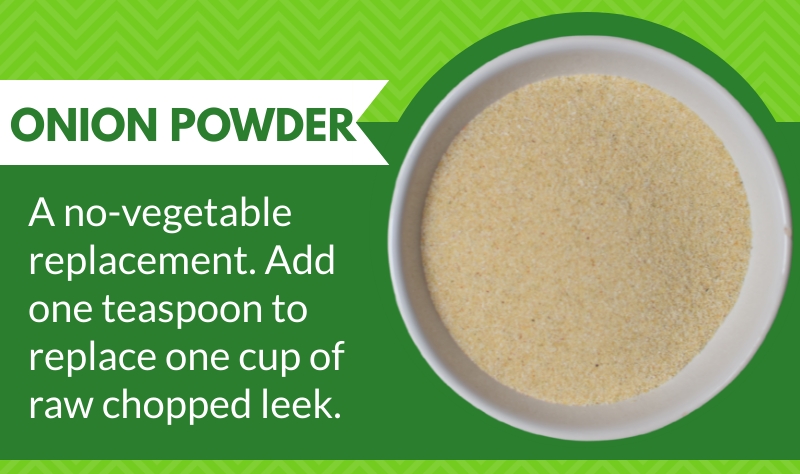 Be sure to also check out our comparison of onion flakes and powder.

Toss them frozen into any recipe that calls for the fresh version, using equal ratios. They can also be roasted, sauteed, steamed, or boiled as a side dish.

Frozen leeks are an excellent replacement, so why did we leave this replacement down at number seven on our list? The biggest problem is that frozen leeks aren’t easy to find in many parts of the world, especially the United States. They’re easier to find in the U.K.

Next time leeks are in-season, we recommend buying a bunch of them to slice and freeze. That way you'll never have to look for a substitute again. Be sure to also check out our essential guide on how to freeze a leek the right way. 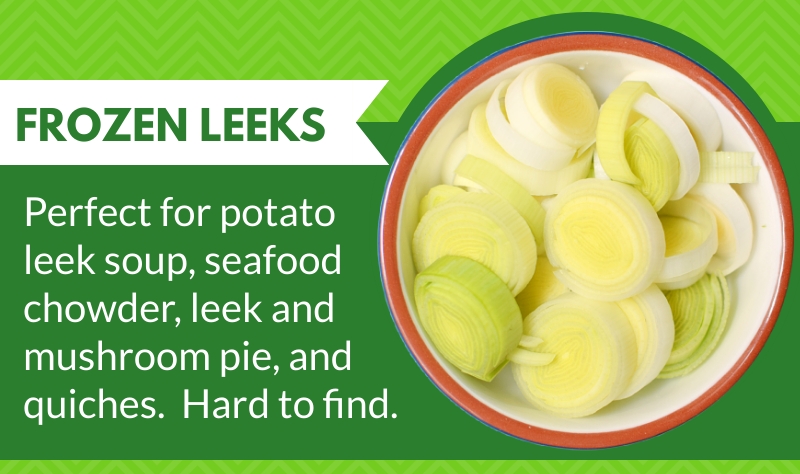 Are some leek recipes unsuitable for using a substitute?

In recipes where leeks play a starring role, like potato and leek soup, it’s best to make something different if you don’t have any. For dishes like casseroles, leeks help build up the base flavor and bulk up the dish. You can get away with a leek substitute in this situation.

How much is one leek chopped?

We did a quick test and found that one regular leek equals 1½ cups of chopped leeks, and a large-sized leek will get you 2 cups.

What ingredients work well with leeks?

Are leeks and onions interchangeable?

Useful reading:
What do leeks taste like?
How to chop a leek like the professionals do.
What's a good substitute for asparagus?

People who don’t have a leek allergy will do well to include leeks in recipes when they're called for. In popular dishes that hero the vegetable, alternatives like onions won’t be as good.

If you must replace leeks, then use shallots, onions, scallions, or ramps instead. Anyone needing a substitute from outside the allium family can try celery or fennel.

Frozen leeks are an excellent backup option if you can’t get them fresh. But, depending on where you live, they're often hard to find in grocery stores. Next time they’re in-season and cheap, buy a few for freezing so that you’re never without.