Grand Marnier is a versatile liqueur with a complex flavor. It tastes distinctly orange and has hints of vanilla and oak. You can drink it as it is, make premium cocktails, or add it to various recipes. Many chefs and home cooks use Grand Marnier to improve the overall taste of meat glazes, marinades, savory dishes, and desserts in cooking and baking. 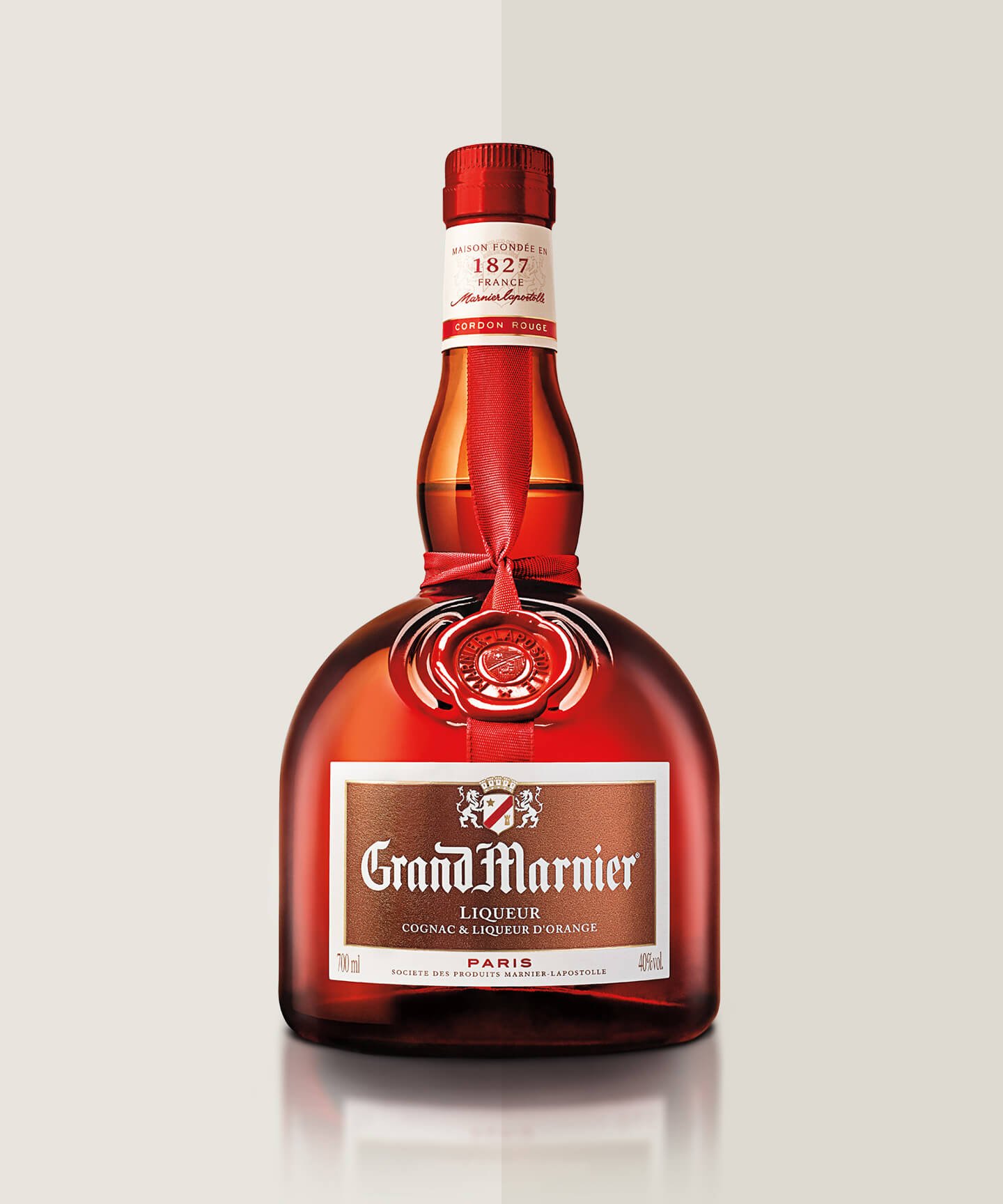 Although Grand Marnier contains 40% alcohol, most of its alcohol content evaporates while cooking and baking, so there’s no need to worry. However, Grand Marnier can be a bit pricey. If you don’t think it’s worth buying a bottle just to use a tablespoon in your recipe, you can use one of the various alternatives.

The best substitutes for Grand Marnier are Triple Sec, Cointreau, Curacao, Cognac, or any kind of brandy. If you prefer not to use alcohol, you can also use any non-alcoholic Grand Marnier substitutes such as orange juice concentrate, orange extract, orange juice, and orange flower water.

The words “triple sec” can refer to two things: a family of dry orange liqueurs or inexpensive, lower-quality orange liqueurs. Triple Sec generally has a balanced taste between bitter and sweet. It’s a little less sweet than Grand Marnier, but you can use Triple Sec as an alternative.

Triple Sec will work well in savory dishes, glazes, stews, sweet sauces, and desserts such as crepes Suzette, crème Brulee, and cakes. And, like Grand Marnier, you can drink triple sec on its own or use it in a classic cocktail recipe. Mix it with some vodka, cranberry juice, lime juice, ice, and optional simple syrup to make a Cosmopolitan.

Since they are pretty similar, replace Grand Marnier with Triple Sec at a 1:1 ratio. You won’t notice the dryness too much unless you drink it on its own.

Cointreau also has the same 40% alcohol content as Grand Marnier, making it good for a mixed drink. For instance, you can combine Cointreau with some freshly squeezed lime juice, tequila, and ice in a cocktail shaker to make a margarita.

Cointreau will do well in savory dishes, glazes, and sauces, but it works best in sweet desserts. Just one teaspoon or a tablespoon of Cointreau will improve the overall taste of the dish or dessert. Replace Grand Marnier with Cointreau at a 1:1 ratio.

Curacao is another type of orange liqueur that has a brandy base. It has a similar orange flavor as Grand Marnier but lacks bitterness and body. You can use regular curacao, orange curacao, or blue curacao as a substitute for Grand Marnier.

Use curacao at a 1:1 ratio when replacing Grand Marnier in baking and making desserts. It works best in fruit-based desserts, but make sure not to use blue curacao if you don’t want your desserts to turn blue.

You can drink curacao on its own or mix it with fruit juices and make cocktails. For instance, you can make a Blue Hawaii drink by mixing blue curacao with lemon juice, pineapple juice, and rum.

Cognac brandy is the alcoholic base for making Grand Marnier. It has a citrusy flavor with hints of vanilla and spices. If you need the orange flavor, you can use Cognac as a substitute for Grand Marnier.

But if you need a strong aftertaste more, you can use any kind of brandy instead. Just remember to consider what flavor the brandy has before using it as an alternative. You can also combine orange liqueur with brandy to bring the flavor closer to Grand Marnier.

If you plan to use Cognac or brandy as an alternative, simply replace Grand Marnier in a 1:1 ratio. Alternatively, you can use a little less amount of brandy and add a dash of orange liqueur for the flavor.

If you plan to use it in drinks, consider adding some simple syrup to add a bit of sweetness. You can make your own mocktail by adding a few drops of orange extract to soda water or sparkling water. Then, mix in some fruit juices like pineapple juice or apple juice, depending on your preference.

The next best non-alcoholic substitute for Grand Marnier is unsweetened orange juice concentrate. It has a stronger orange flavor than Grand Marnier and a similar thickness. However, the sweetened version might taste too sweet compared to Grand Marnier, so make sure to use the unsweetened ones.

The easiest Grand Marnier alternative to find is orange juice. Even if you don’t already have it at home, you can easily buy it from any store or squeeze a few fresh oranges. Freshly squeezed orange juice has a better flavor and aroma, but you can use store-bought ones, too, if you prefer.

Orange juice is great for baking and making desserts. Add it to ice cream, cakes, pies, or bread to make some delicious treats. It also works great in glazes, marinades, and sauces. You can make a non-alcoholic mimosa at home by mixing some sparkling apple cider and orange juice together.

Although orange juice will not have any bitterness, you can swap it with Grand Marnier at a 1:1 ratio. Or, you can also use equal parts of orange juice and water to lessen the sweetness.

Since it’s so mild, it won’t provide much of the orange flavor when baking, but you can use it in a pinch. Like all non-alcoholic Grand Marnier substitutes, you can use orange blossom water to make mocktails.

To use orange blossom water as an alternative, use two teaspoons of orange flower water for every two tablespoons of Grand Marnier. However, since it has a milder flavor, you might want to add more. Make sure to add only a small amount at a time until you reach the desired taste.

Now, that you have gotten to know these best substitutes for Grand Marnier, check out the table below for a quick look at each option and its unique qualities.

What exactly is Grand Marnier?

Grand Marnier is a brand of French liqueur best known for its product, the Cordon Rouge. The Grand Marnier Cordon Rouge is an orange-flavored liqueur made of Cognac brandy, sugar or simple syrup, and distilled essence of bitter orange.

Created by Louis Alexandre Marnier-Lapostolle in 1880, Grand Marnier has long been used for drinking, baking, cooking, and mixing premium cocktails.

What cocktails use Grand Marnier?

Grand Marnier has been used in sidecars, margaritas, and as an alternative for those who prefer an orange liqueur with a stronger kick. You can use the liqueur in almost any cocktail you like. Although not a cocktail, you can mix it with some red wine, apple, orange, lemon, and lime to make a red wine sangria.

However, some recipes call specifically for Grand Marnier. For instance, the Cadillac Margarita is a premium cocktail that can be made using Grand Marnier, Cointreau, high-quality tequila, and freshly squeezed lime juice.

Gran Gala and Grand Marnier are both orange liqueurs that use brandy as a base. However, Grand Marnier is made using French cognac, while Gran gala uses Italian brandy. They have the same 40% alcoholic content.

The two also slightly differ in flavoring. Grand Marnier is made with the essence of bitter orange peels, while Gran Gala uses Mediterranean oranges. Lastly, Gran Gala is much more affordable than Grand Marnier. You can also use Gran Gala as a substitute for Grand Marnier if you have it.

Can you sip Grand Marnier on its own?

Yes, you can drink Grand Marnier on its own. It has a pleasantly rich, heavy flavor and a powerful enough kick. Its natural sweetness also makes Grand Marnier more tolerable to drink, even on its own.

Can I cook with a Grand Marnier substitute?

You can cook with any of the Grand Marnier substitutes on our list. However, know that some of them might not work best for the recipe you plan to cook. For instance, the non-alcoholic substitutes might not do great in dishes where the alcohol in Grand Marnier plays an important part.

None of the substitutes will completely replicate Grand Marnier, but you can come pretty close by combining brandy with some type of orange flavoring. Orange liqueur such as Cointreau or Curacao work best, but orange concentrate, orange juice, orange zest, or orange extract will also work.

Are Cointreau and Grand Marnier the same?

Cointreau and Grand Marnier are similar, but they are not the same. Cointreau is an orange liqueur with a clear liquor base under the Triple Sec family. On the other hand, Grand Marnier is made with a brandy base and has a rich, complex flavor. Both contain 40% alcohol, but Grand Marnier is sweeter than Cointreau.

You can use both in cooking, baking, drinking, and mixing cocktails, but Grand Marnier is more high-end.

Grand Marnier and Cointreau are quite similar, so it really depends on personal preference. Cointreau has been preferred for traditional cocktails since it is more affordable, while Grand Marnier has been used in premium drinks such as the Cadillac Margarita.

Neither one is necessarily better than the other. Cointreau is more affordable, while Grand Marnier is more high-end.

How long is Grand Marnier good for?

As long as you store it properly in a cool, dry place, Grand Marnier will last long. An unopened bottle of Grand Marnier will last for eight years or more when stored properly. Once opened, however, the bottle should be consumed within six months or up to a year at most. Any longer than that and it will start to degrade in quality.