Tuaca liqueur is a brandy-based spirit that includes vanilla, citrus essence, and a blend of spices. Its dominant flavor is vanilla bean and it is a versatile drink used to make high-end cocktails. Cookbooks will also call for the use of this product in some desserts, and it is increasingly being used in the United States. Add a splash of Tuaca to hot beverages like cider and coffee or use it to add a delicious depth of flavor to sweet desserts.

Tuaca is a premium alcoholic beverage and if you only need a little bit of it in your cooking or drinks, then you may need an alternative. Although this liqueur has its unique flavor, we have compiled a list of Tuaca substitutes so that you can finish the recipe without it. Let's dive in and take a look.

Licor 43 is a Spanish product that is fairly common in the United States. It has a similar citrus and vanilla flavor that you would get from Tuaca. There are 43 ingredients in this bottle including vanilla and a range of subtle aromatic herbs and spices. It was first made over 2000 years ago and the combination of aromatics provides smooth layers of citrus vanilla and caramel.

It won't perfectly mimic the taste or quality of Tuaca, but it will do a good job filling in for most recipes that call for the original liqueur.

Gran Gala is a similar style of liqueur to Tuaca. It takes a blend of VSOP Italian brandy and infuses it with fresh orange flavor. Its taste is considered exceptional - velvety smooth with a sweet fruity, full-bodied flavor.

Gran Gala will provide the same hit of brandy and orange that you would get from Tuaca. However, it doesn't provide any vanilla notes and also the orange is much more pronounced. For a more authentic flavor, you may want to try adding some extra vanilla extract or vanilla bean paste if it is appropriate for what you're making.

Grand Marnier is a popular French brand of liqueur. Within its range is the popular orange-flavored product called Grand Marnier Cordon Rouge. It was first made back in 1880 and is a blend of Cognac brandy, sugar, and distilled essence of bitter orange. Use this liqueur to replicate the orange taste of Tuaca and add some additional vanilla. 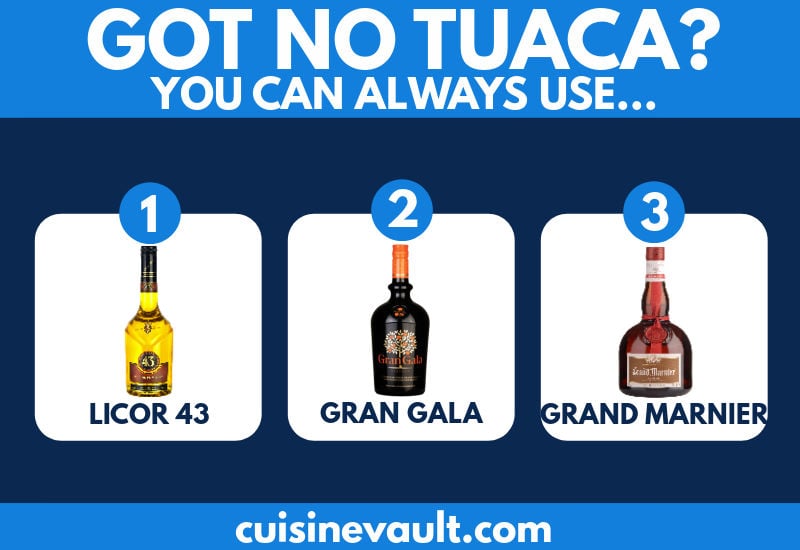 As the name suggests, vanilla vodka is regular vodka with the addition of vanilla. The combination results in a clean flavored product that can be added to a variety of mixers and many food recipes.

Depending on the product you buy, this option will usually be less sweet than Tuaca and won't have the orange flavor or herbal notes. The addition of orange extract, juice, or zest will result in a better replacement.

If you are looking for a low-cost option, then brandy will serve you well. Its taste will vary significantly depending on what fruit was used to make it and how long it has been aged.

A popular brand you may want to try is Cointreau, which has a smooth, crisp, orange-flavor. It has been made since 1875 and uses a combination of orange peel and sugar beet alcohol.

Crème de Vanille is a light golden color and has a delicate aroma of vanilla custard. It has a unique taste of crème caramel and vanilla. If you enjoy the flavor of vanilla in your cocktails or desserts, then Crème de Vanille is a good replacement option that you might want to consider. The orange notes will be missing, so you may want to add some orange essence for a more authentic flavor.

Of all the options on this list, rum is probably the least like Tuaca. It is a liquor that is distilled from sugar and its underlying flavor is sweet toasted sugar. Rum is a great option if you're looking for a cheap bottle of spirits that is versatile and fits into a wide range of cocktails.

Related reading:
What are some useful apple brandy substitutes?
What are the best drambuie substitutes?
How can I replace kirsch in the kitchen?
Is there a good substitute for grenadine?
What is the best alternative to cooking sherry?

Worth a read: What can I use as a substitute for orgeat?

Tuaca liqueur is a delicious combination of vanilla, citrus, and other spices. It is a unique drink that you won't perfectly substitute in a recipe. However, there are some useful alternatives if you can't get your hands on any Tuaca or the price is too expensive. Licor 43, Gran Gala, Grand Marnier, Vanilla Vodka, Brandy, Crème de Vanille, or Rum are all possibilities. Keep in mind that some of these options will mimic the taste better than others. The one we recommend is Licor 43 which is closely followed by Gran Gala; the others will work well in most recipes that call for Tuaca, but the result will be different.

Have you tasted Tuaca before? What did you think of its flavor? Please let us know in the comments below.