Mimolette is a French semi-hard cheese made from cow’s milk. It is a vibrant orange color and has a nutty, tangy, earthy flavor with fruity, caramel notes. This cheese is excellent for grating and is delicious melted on gratins, pies, and pasta.

Like casu marzu, Mimolette has gained notoriety for the unique way it is aged. Microscopic mites are encouraged to feast on the rind to increase aeration and enhance the cheese’s earthy flavor. The critters also create eye-catching patterns in the rind that help set this variety apart from the myriad of other products on the market.

Using mites in the production process creates allergy concerns, which has resulted in some countries like the United States banning it from entering the country. If you can’t get your hands on this cheese, then you’re going to need an alternative option. We’ve created a list of suitable Mimolette substitutes so that you can continue life without the original ingredient.

What can I use as a Mimolette substitute?

To replace Mimolette in the kitchen, we suggest you try Edam, Gouda, or a mild cheddar as your best options. They won’t perfectly mimic the original cheese, but they all have similar flavor profiles and can be used the same way in recipes. Parmesan, Fontina, Emmental, and Appenzeller will also work in a pinch. 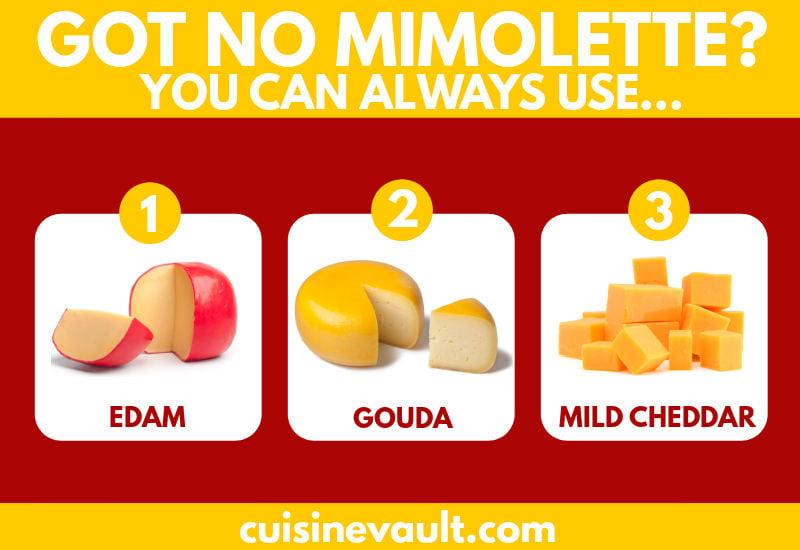 Edam is a semi-hard Dutch cheese made from goat’s or cow’s milk. It has a mild nutty flavor that intensifies with age and a creamy texture that starts out springy but hardens and dries as it matures. If you need to replace Mimolette then Edam is the recommended choice - it has similar characteristics and is easy to find at the grocery store.

Although the two cheeses are made in much the same way, the milk used for each product is different. The cattle have their own unique diet in each region, resulting in subtle flavor variations. However, most people won't notice a difference.
Edam can be paired with fruit like pears, cherries, apples, or apricots. It is also perfect for slicing and adding to sandwiches or topping on crackers. In cooking, use Edam in soups and sauces as an excellent melting cheese.

Did you know? Mimolette is also known as French Edam.

Gouda is a semi-hard cow’s milk cheese from the Netherlands that is similar to Mimolette. Its taste is sweet and nutty with a creamy texture and a finish that can range from smooth to sharp depending on its age. As this cheese matures it develops salt crystals which provided a crumbly texture.

Use Gouda on crusty bread, melted into sauces, or grated over mac and cheese and baked until golden brown.

Although the characteristics of this cheese can vary depending on the brand, it is generally tarter and a little lighter than Mimolette.

Cheddar varieties can vary greatly in flavor and texture depending on the cultures used, age, and a range of other factors. Once mature, it offers a sharp flavor with a pungent aroma. We suggest searching for a young, non-aged product that is mild in flavor and mimics the characteristics of Mimolette.

You may want to consider using American cheese, a type of cheddar that also has an orange hue thanks to the addition of annatto. It is a good option for melting over food and will provide a similar result. However, keep in mind that American cheese is not of the same quality as Mimolette. It's a great option if you're cooking for kids and people that don't get too caught up in the need for fancy ingredients. 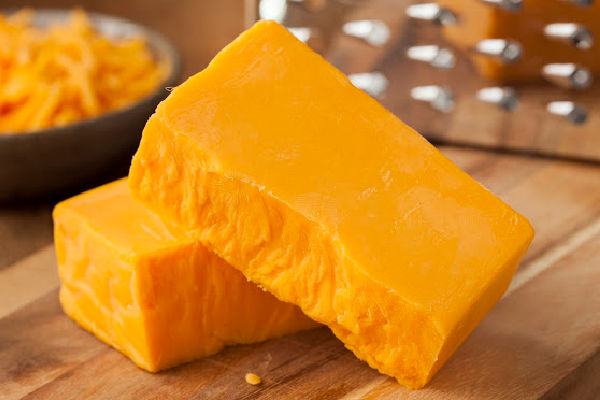 Cheddar is an excellent melting cheese.

Whatever type of cheddar you choose, it can be used in all the same ways that you would use Mimolette in the kitchen. It is especially good grated over baked dishes and will transform into a mouth-watering crispy brown layer once cooked.

Tip: if you've ever wondered how to make your own cheese then check out our illustrated guide for making cheddar at home.

Aged parmesan has a similar hard, gritty consistency to Mimolette but has a stronger flavor and aroma. If you like a bit more bite to your cheese, then we recommend Parmesan as an excellent option. It is best known as a grating cheese that adds flavor to risotto, pasta, vegetables, and soups.

For those that enjoy flavorsome cheese, you may also want to consider Fontina or Cotija cheese as useful replacements.

Emmental is a semi-hard Swiss cheese made from cow’s milk and full of olive-sized holes. It has a sweet and nutty flavor with a creamy, buttery texture and a pungent aroma. We have previously mentioned this cheese variety in our article on why cheese smells. Take a look if you’d like to know what other types make the list.

If you need cheese for fondue then this is a delicious option that melts into a silky, smooth consistency. Emmental is also at home on a cheeseboard and makes an excellent substitute for Mimolette.

Although Appenzeller is one of the most popular cheeses in Switzerland, it is a lesser-known variety in the United States and many other countries outside of Europe. It has a fruity, nutty taste that is mild when young. We recommend avoiding the aged products if you don’t enjoy tangy, pungent cheese.

Use Appenzeller to replace Mimolette as melting cheese, sliced into sandwiches, or served on a dessert platter with fruit.

Why is Mimolette orange?

The cheese gets its distinctive orange color from a natural substance, anatto, which derives from the seeds of the achiote tree. It is a commonly used ingredient in many kinds of cheese around the world.

Why is Mimolette banned in some countries?

Some countries consider the cheese a health risk as small mites are allowed to feast on the rind during aging. This is how its unique pitted surface results.

When was Mimolette first made?

Mimolette originated in France back in 1675 during the French-Dutch war. Dutch cheese was prohibited in France and so the local farmers in the northern region made their own version.

If you’ve got no Mimolette in the refrigerator then Edam, Gouda, or a mild cheddar will make excellent replacements. They’re all versatile cheeses with great melting properties but are just at home sliced or served up on a cheese board with fruit, wine, or beer. Keep in mind that Mimolette has a unique production process that uses tiny critters to aerate the rind. This results in a unique flavor that you’ll never perfectly mimic with another variety of cheese.

What are you looking to use a Mimolette substitute for? Please let us know in the comments below.