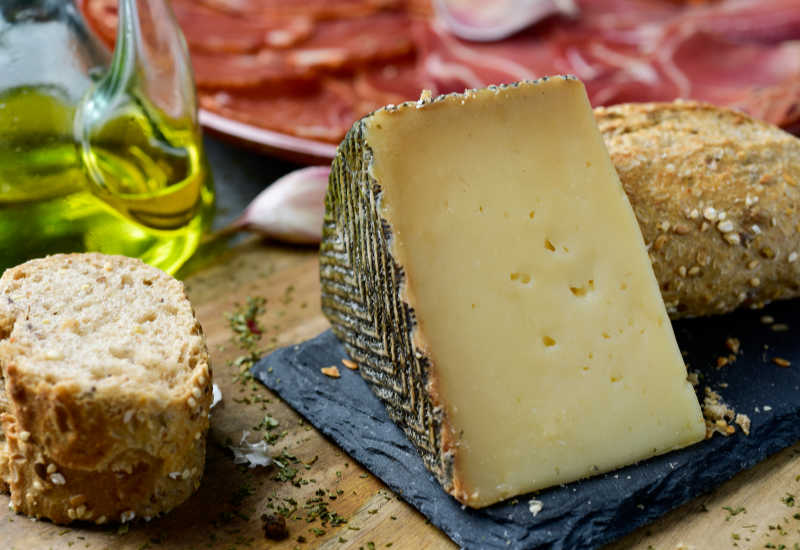 Manchega is a semi-hard sheep’s milk cheese with an intense combination of sweet, salty, and zesty flavors in one bite. It is produced in the La Mancha region of Spain from the milk of Manchega sheep. As the cheese ages, the flavors sharpen and the texture becomes flakier and more granular. The source of milk provides a distinctive flavor to the cheese which has made it a popular choice in kitchens around the world.

The use of manchego on cheese platters is old news. Increasingly, the cheese is being added to pies, sandwiches, salads, and any dish that incorporates melted cheese. Tuna casserole, mac n cheese, and the French classic Croque Madame all benefit from the addition of this cheese. But what if you don’t have any in the fridge? Unless you have a specialty cheese store nearby or a supermarket that stocks it, you’re going to need a manchego substitute. Although you’ll never mimic the flavor perfectly, there are some good alternative cheeses which are easier to find. Let’s dive in and look at the best options. 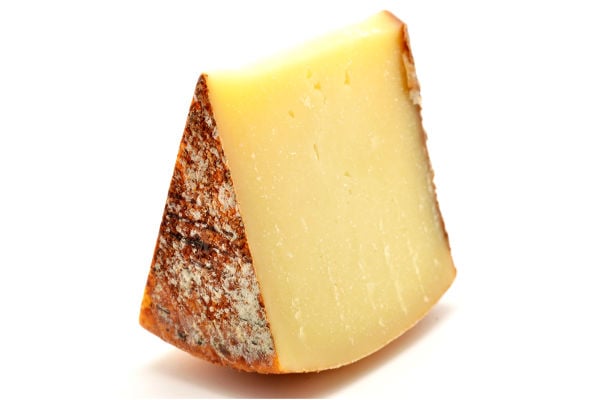 Pecorino is an Italian sheep’s milk cheese that is readily available in the United States. It has a strong tangy and nutty flavor which is delicious on chicken parmigiana or grated over pasta. Pecorino makes a great substitute for manchego and can be used in any dish or application that calls for it. Although pecorino is often compared to parmesan, it isn’t as dry in texture or as salty; its flavor profile is closer to manchego.

Hint: Pecorino is more intense in flavor so you may want to use a little less if you’re using it as an ingredient in cooking.

Did you know pecorino is used to make the infamous maggot cheese found in Sardinia? Find out what casu marzu tastes like in this article. 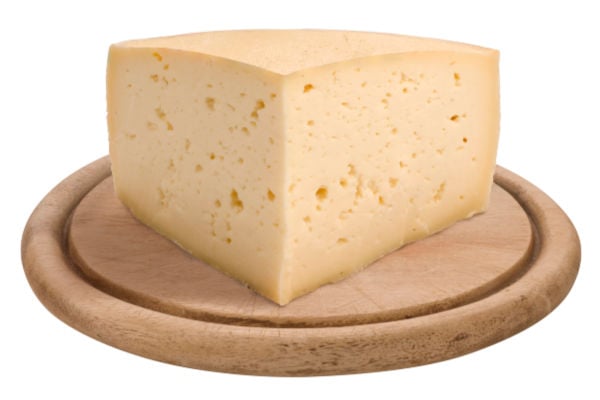 Asiago originates from the northeast of Italy and is a cow’s milk cheese that has a sharp nutty flavor. It is a hard cheese and is excellent melted onto pizza or casseroles. It can also be grated and sprinkled over pasta, sauces, or soups. It is important to buy the aged product as there is also a fresh version that is sold as semi-soft cheese.

Perhaps the biggest problem with asiago is not the flavor, but the availability. Like manchego, it can only be made in one region, so supply is limited. This can make it hard to find in supermarkets. Your best bet is to visit a specialty cheese store if you have one nearby. 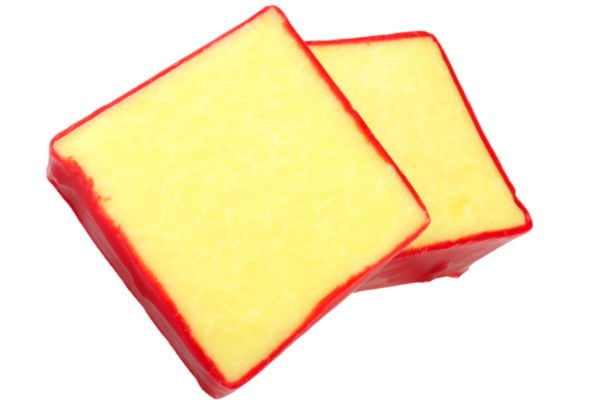 Monterey Jack is a semi-hard creamy cheese that has a taste and texture similar to cheddar. This backup option has a significantly different texture than manchego and lacks the complex flavor profile. But that doesn’t mean it can’t be used as a replacement in your food. Monterey Jack excels as a melting cheese and is especially popular in Mexican and Spanish cooking.

If you’re using it for a cheese platter then you may want to find another option like pecorino or parmesan to get that nutty flavor that pairs so well with fruit.

Monterey Jack is our recommended option for those that are looking for a cheaper cheese. It is also great for anyone that prefers a simpler, more mainstream cheese. It has excellent melting properties making it a useful option for any recipe that calls for manchego.

Parmesan is such a common cheese in the United States (and most other parts of the world) that we decided to include it on this list. Without question, it has a more intense salty, tangy flavor with a nutty undertone that brings a delicious hit of umami to any dish.
Although pecorino is a better replacement, parmesan can still be used in any recipe that calls for manchego. The essential mantra to remember is “less is best”. A heavy hand with the parmesan will result in an unbalanced salty meal.

If you’re looking to replace manchego on a cheese platter then parmesan is perfectly fine to use. Include some sweet ingredients like honey to help balance out the saltiness.

Comté is a French cheese made from cow’s milk and has a nutty, earthy flavor that is delicious is cooking. Its texture is creamy and well suited to foods that incorporate melted cheese; grilled cheese sandwiches, souffle, spaghetti, puttanesca, and soups all benefit from this ingredient.

The flavor profile of Comté is a little different to manchego, but it still can deliver similar richness to any meal. We like comté because it’s another option that’s easy to find in supermarkets or from any cheesemonger.

Mozzarella is another Italian cheese made from buffalo milk and found in practically any store’s cheese section you visit. This is your go-to choice if you have fussy eaters who don’t like variety in their cheese.

Mozzarella is a mainstream cheese most love, and it shares similar melting properties to manchego, making it a useful substitute for pizza making, pasta, or any other cooked meal. Although mozz can be sliced in sandwiches, we don’t recommend using it as a replacement for manchego on a cheese platter - pecorino is your best option for this. 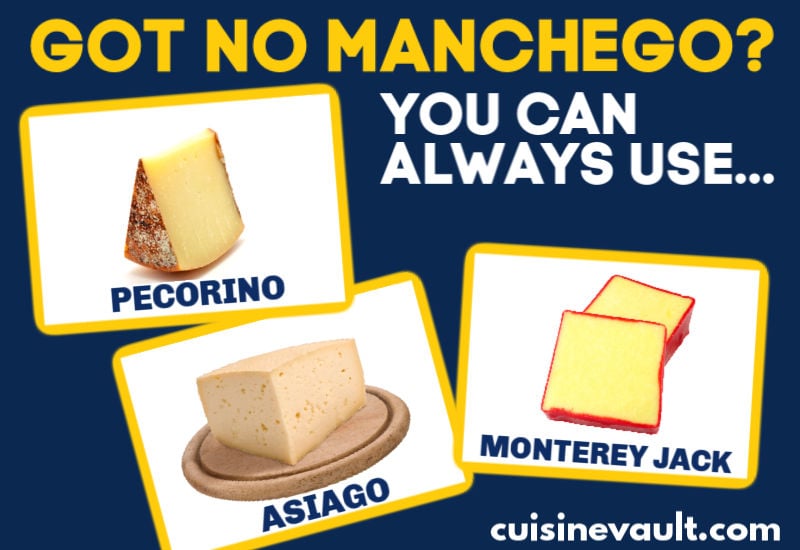 Related reading:
How to make cheddar cheese at home - our ultimate guide.
What are the best cheese slicers? Check out our in-depth review.
Discover the best taleggio cheese alternatives.
How to replace fontina in cooking - we have the answers.

Manchego is a lovely melting cheese and its flavor and aroma are likely to appeal to most. However, if you can't or won’t eat this cheese, then the best replacements are Pecorino Romano, asiago, Monterey Jack, Parmesan, Comté, or mozzarella. Each of these cheeses are suitable for melting into your favorite dish and most won’t be out of place on a cheeseboard.

Other possibilities you may want to consider are Cotija, Muenster, or Zamorano. In some parts of the world they're not so common, but if you have a wedge in the refrigerator then put it to good use!

What is your favorite melting cheese that you couldn’t live without? Please let us know in the comments below.