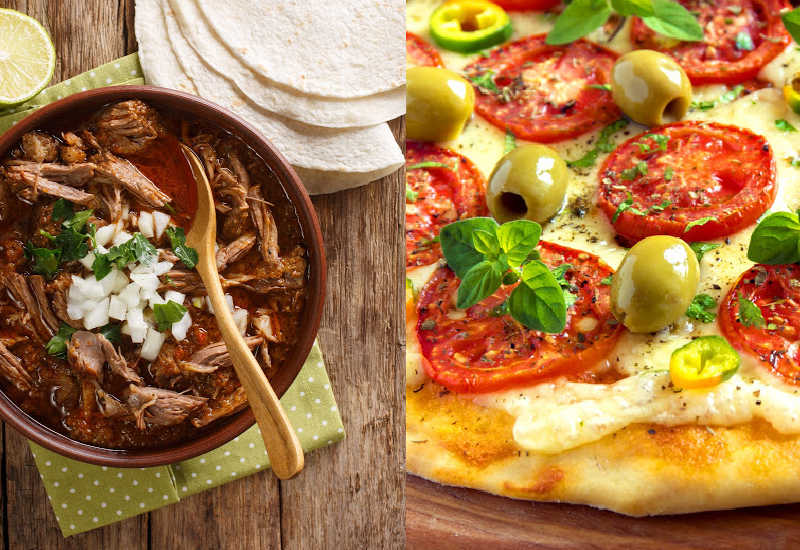 When we talk spices, most home cooks in the United States think of oregano as being a single variety of herb. While it isn't necessary to understand the subtle differences of every oregano type grown around the world, it can help your cooking to know the difference between Mexican and Italian oregano. They are distinct ingredients that have their own uses in the kitchen. Let's take a close look at how these two herbs compare.

What's the difference between Mexican and Italian oregano?

Mexican oregano, also known as Puerto Rican oregano, is native to Mexico and has pungent, citrus flavors with a subtle licorice undertone. It is excellent for sprinkling into salsa, Latin American dishes, black beans, pozole, or spicy Tex Mex food like chili.

Italian oregano is the regular variety that is more commonly used in U.S. households. Also referred to as wild marjoram, it has a robust flavor with sweet, minty, bitter, and peppery notes. Of all the Mediterranean oregano varieties, Italian is the mildest and is delicious added to pasta sauce, pizzas, or used as part of a meat rub seasoning.

Both herbs can be used fresh or dried, but you'll find the Mexican variety is stronger and can easily overpower dishes. We suggest using this option when you're cooking with other ingredients that won't be overpowered; for everything else, Italian oregano is our seasoning of choice.

Although Mexican and Italian oregano can be used interchangeably, it isn’t a great idea for some recipes. For example, a sweet tomato sauce benefits from a sprinkle of regular oregano but if you add the Mexican version it will dominate the dish.

Keep in mind that Mexican oregano has an additional lemony flavor note and is more pungent, so we suggest using less of this ingredient if you have to replace the Italian variety. 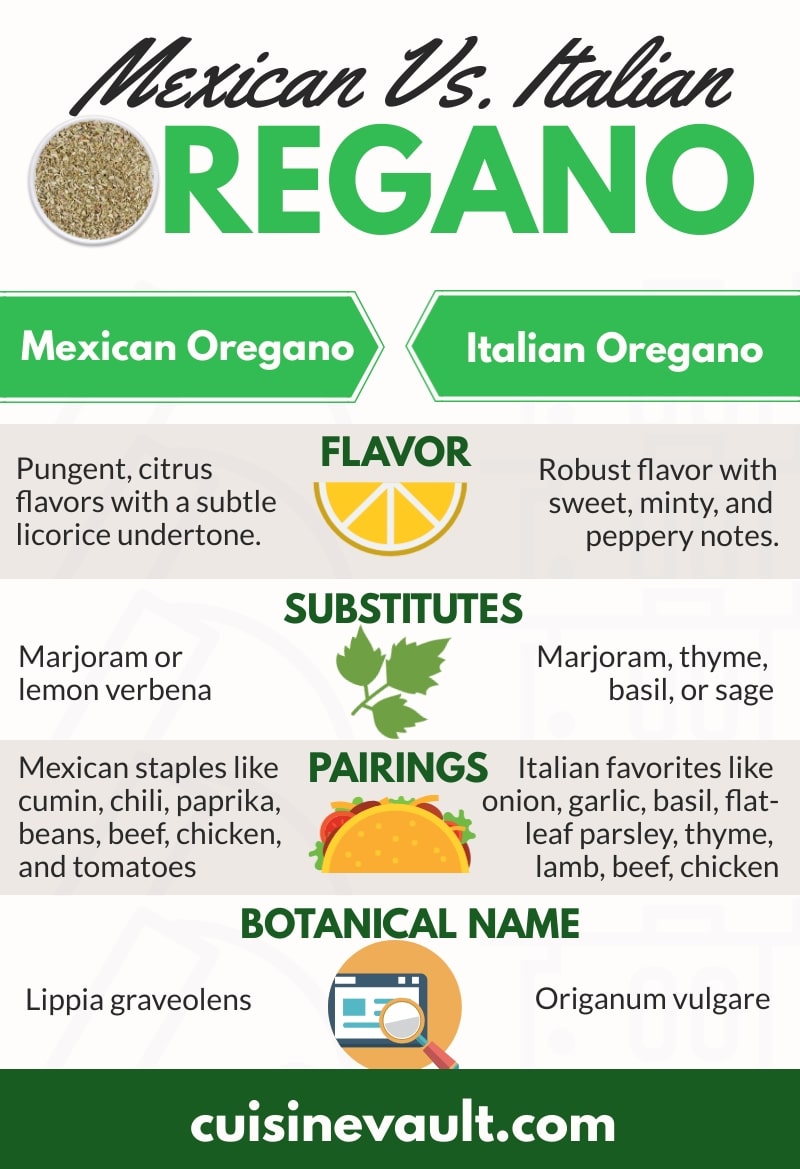 Mexican oregano pairs well with ingredients traditionally found in a Mexican pantry. Consider using spices like cumin, chili, and paprika, or combine it with food like beans, beef, chicken, avocado, and tomatoes.

Pair regular oregano with other Italian favorites like onion, garlic, basil, flat-leaf parsley, or thyme. Use it with lamb, beef, chicken, or combine it with olive oil as a base for your next Italian vinaigrette.

Choosing a winner out of Italian and Mexican oregano is tough because they both have their uses in the kitchen. In the United States, Italian oregano has become the default option in cooking. It is hard to know whether this is because its flavor is a better match for the American palate or because it was introduced to American households, decades before Mexican cuisine went mainstream.

Mexican oregano’s intense earthy, peppery flavor may be a little too much for some people, especially kids. The more subtle taste provided by Italian or any Mediterranean oregano is likely to be the more popular option.

Rather than trying to decide a winner, it's better to keep each option at home and alternate depending on the cuisine. Use regular Italian oregano in Italian recipes and reserve the Mexican variety for burritos, tacos, beans, heavy meat dishes, and other similar styles of recipe.

Can I eat them dried or fresh?

While Mexican and Italian oregano leaves can be used fresh or dry in cooking, we suggest using the dried spice when cooking Mexican. Its flavor develops and intensifies, but best of all, it is easier using a shaker bottle without the need for preparation.

Where can I buy oregano?

If you're looking to buy regular Mediterranean or Italian oregano, then you’ll easily find them in the spice aisle of the grocery store. Locating Mexican oregano is a bigger challenge and you’ll probably need to visit a specialty grocer or Latin market. Alternatively, it's easy to find online.

Mexican and Italian oregano are two quite different ingredients when used in cooking. As a general rule, it's usually best to reserve each one for their own cuisine. Each plant comes from completely different families which explains why their flavor is different. The Mexican variety is pungent and citrusy with a subtle anise undertone; Italian Oregano has a slightly sweeter, more subtle flavor and it's likely to be the spice that you're currently using in cooking.

It is conceivable that the two spices can be used to replace each other in cooking. After all, one spice is unlikely to ruin a dish, especially if you don’t use a heavy hand. However, you're better to replace Mexican oregano with marjoram while Italian oregano could be replaced with marjoram, basil, or thyme.

What herbs and spices do you consider essential in the kitchen? Please let us know in the comments below.