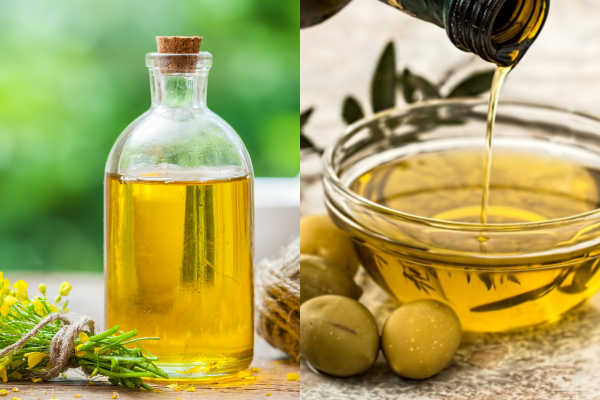 Whatever your preferred cuisine in the kitchen, it’s likely that cooking oil is a staple in your pantry. Two popular types on the supermarket shelf are olive oil and canola oil. At a glance they may look similar but it’s important to understand their strengths, weaknesses, differences and similarities when choosing oil for home cooking. After reading this page, you’ll have a good grasp of olive oil vs canola oil and their role in the kitchen.

You may also want to read: what does foie gras taste like? Read more here.

Prefer to watch rather than read? Check out this quick video...

Canola oil is the product of rapeseed and is refined which means it has been processed using chemicals or heat. It is a light yellow color, almost clear and the refining process means that the color is consistent in every bottle. You know what color you’ll get every time you buy a bottle of this oil.

Olive oil varies in color from intense dark green shades through to a light yellow.

Color doesn’t necessarily indicate the quality of the product. Even if all the conditions are kept consistent, a batch of olive oil could vary in color from season to season, even if the same variety of olives are used from the same farm. 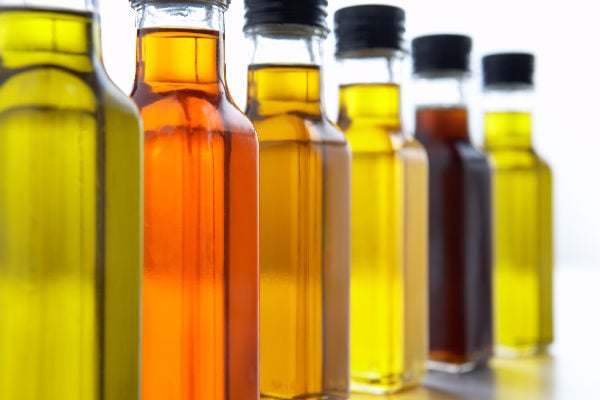 Olive oil varies in color but this variance has little impact on quality.

In most cases color won’t have much of an impact on your cooking. However, olive oil can add an unexpected shade of color to your food; it won’t affect a slow cooked casserole but if you’re baking vanilla muffins the oil may have a small impact. Whether that’s a good or bad thing will really come down to your personal preference.

The smoke point of cooking oil refers to the temperature it can reach before it begins to burn and produce smoke. Smoke point should be a key consideration for any home cook. An oil with a low smoke point will be more volatile and unsuitable for cooking methods such as stir frying and deep frying. Before the food is cooked the oil will burn, imparting an unpleasant burnt flavor to the dish.

Burning oil isn’t just a flavor issue; it also causes the healthy components, such as vitamins and phytochemicals, to diminish.

Smoke point temperatures vary a little depending on the brand you choose. Ingredients and processing methods vary with each manufacturer which is the cause of this variation.

Canola oil ranges from tasteless through to a very mild oily flavor. Once added to food it will have no impact on the dishes taste. Canola oil is odorless when it’s freshly opened; however, it will begin to impart a bitter, pungent aroma as it ages.

Good olive oil has a pleasant, fruity aroma and will mimic the taste of the olives it was produced from. Flavors may include a hint of fresh grass, nuts, vegetables, along with a spicy, bitter undertone.

Global consumption of canola oil is significantly higher than olive oil. Check out the graph below which shows worldwide consumption of each oil type over the past six years. 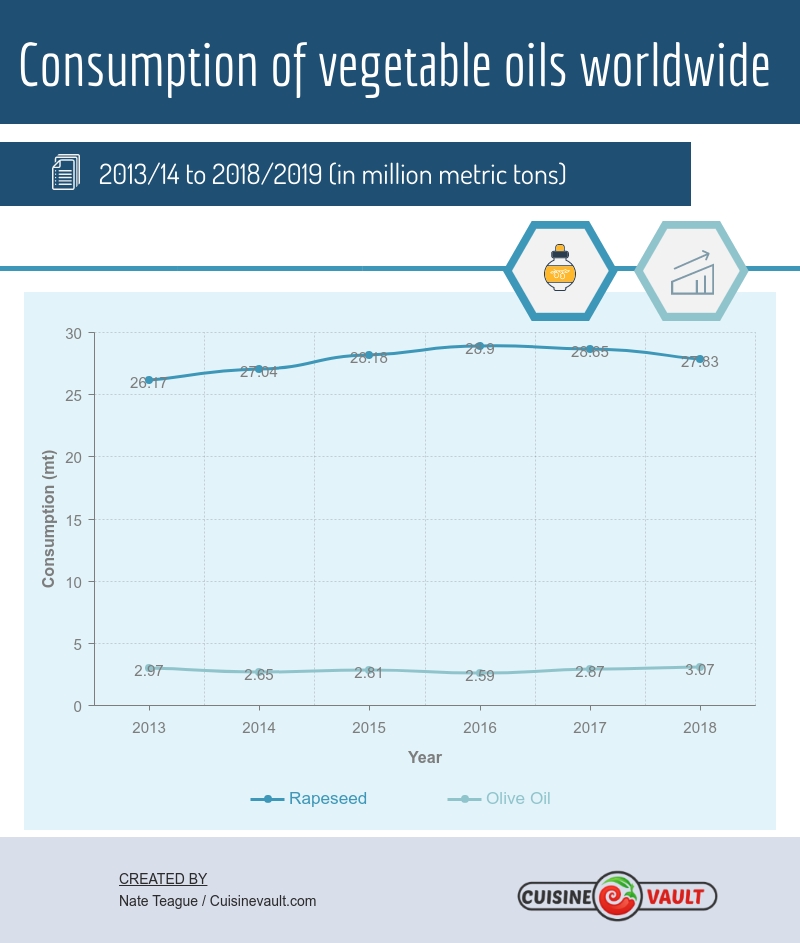 It’s important to understand that this higher consumption isn’t because canola oil is a superior product. In fact, you could argue it’s the reverse. Olive oil isn’t produced on a mass scale to the extent of canola. Supply of canola is abundant and its price is significantly lower. Olive oil is positioned as a more premium ingredient and appeals to a smaller segment of the market.

Looking at the nutritional table it would appear that the nutritional benefits of these two oils is comparable. However, extra virgin olive oil benefits from retaining the nutrients in the olives. The levels of polyphenols, vitamin E, sterols and squalene are more prevalent in EVOO, compared to canola oil and even other refined olive oils.

Want to learn more?
Find out what we recommend as an alternative to avocado oil.
What are the best olive substitutes?

I have to confess, writing this review took a lot of constraint. My bias towards olive oil had to be put aside to provide objective facts. From a personal perspective if I was to provide my favorite cooking oil it would, without any doubt, be extra virgin olive oil. Maybe I’m biased being married to an Italian woman and having spent time in Calabria. This is a part of Southern Italy where olive groves are as common as sheep in New Zealand or waffles in Belgium. The Italian passion for producing quality food is something to be envied and I think olive oil adds something special to many dishes. If you’ve ever tried olive oil ice cream then you’ll understand what I mean – it’s subtle, yet delicious.

Canola oil should not be written off as a very useful kitchen staple. It has its place. For dishes that require high heat like stir-fries and making deep fried donuts I’ll use canola oil, thanks to its high smoke point. It’s also useful for baking if you don't want that subtle flavor and aroma of olive oil.

Which oil is best, olive or canola? I’d recommend a bottle of each; they both have their strengths in the kitchen. A large bottle of extra virgin olive oil should be mandatory though. Making a dipping oil for bread and grisini won’t be the same with canola oil. A vinaigrette, Italian salad, pesto or aioli will be lifted to new heights with a premium olive oil. Try each oil for yourself and see what you think.