As one of the most popular varieties of blue cheese around, gorgonzola has earned its place on salads and cheese plates across the world. However, if you don't have any on hand or prefer a less pungent alternative, you'll want to have one of the best substitutes for gorgonzola readily available. 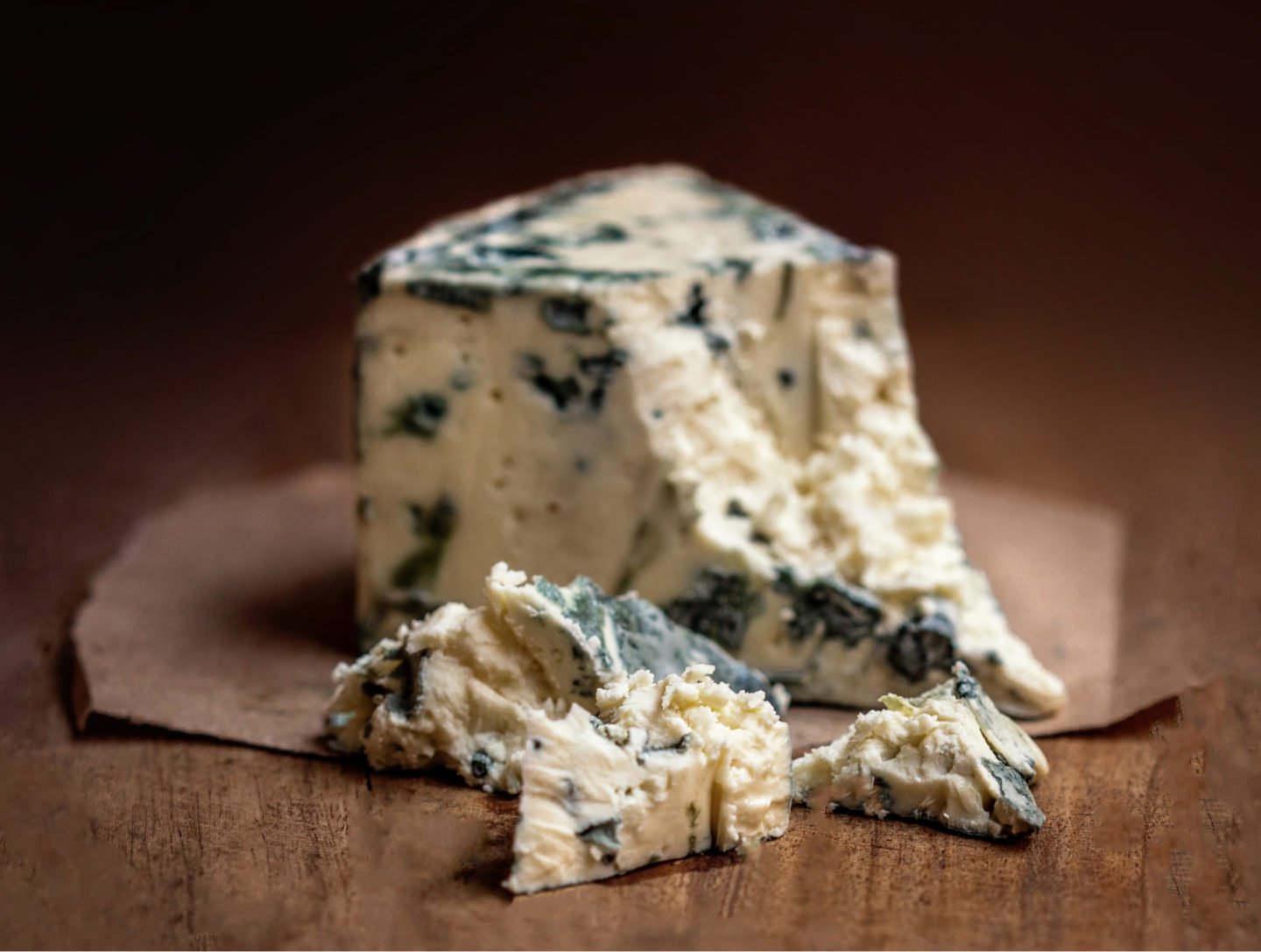 Gorgonzola has a strong flavor that is both pungent and tangy, letting it take a starring role in any dish it's used in. Because of this, your best bet when substituting is using another blue cheese. Though many varieties can be used, Roquefort is the closest match in terms of flavor and texture.

There are also non-dairy and non-moldy varieties to explore, letting you get a similar taste in just the way you like.

Roquefort is one of the varieties people think of when they reach for blue cheese. Strong, pungent, and slightly tingly on the tongue, it's a bit stronger than gorgonzola. Still, it makes an excellent substitute, and you can use it in any of your favorite gorgonzola recipes.

Keep Roquefort's texture in mind when substituting for gorgonzola. It is usually soft and crumbly and may not be an ideal substitute for harder types of cheese. Though it's the ideal choice when putting together a charcuterie board.

The great thing about feta is its versatility, as it can be used on salads, pita sandwiches, and even plain. It has a similar texture and saltiness as gorgonzola, though it completely lacks the characteristic pungency of the cheese. However, this can be a benefit for those unfamiliar with mold-aged cheeses.

Because of its texture, feta is a good match for the hardest and most crumbly varieties of gorgonzola. Try it on salads for a tangy and salty element.

Goat cheese is similar to feta in the sense that it's tangy and salty. This makes it a good approximation for gorgonzola, even though it doesn't have the same blue mold veins.

The most common varieties of goat cheese are soft and spreadable, which means they're not always a good match for gorgonzola. However, they make an excellent replacement for dressings and dips as they can be easily incorporated without clumping.

As the name might imply, Gorgonzola Dolce is just another type of this blue cheese variety. It is similar to the more common type but is softer and a bit milder in flavor. You might have trouble finding it in American supermarkets, but if you come across it, don't forget that you can use it just as long as you're fine with the softer texture.

Go for this type of gorgonzola if you want something that can spread easily on a cracker or easily incorporate into a dip or dressing. But, of course, it's still delicious on its own.

For those who are just trying blue cheese for the first time, Stilton is a great place to start. It is one of the mildest types of blue cheese, with a subtle sweetness that contrasts a buttery flavor. Like other varieties of blue cheese, it has a crumbly texture which makes it a good choice for salads.

Danish Blue, also known as Danablue, is an excellent substitute for gorgonzola as it has a similar level of salt, pungency, and creaminess. However, it is a little stronger than gorgonzola, so it may only be the ideal option if you're a true fan of blue cheese flavor.

You can use Danish blue cheese for pretty much any gorgonzola recipe, including salads, dips, or raw. However, it is traditionally eaten with bread or buttery biscuits.

This variety of blue cheese comes from the Auvergne region of south-central France, which is where it gets its name. It has a more buttery and less salty flavor than gorgonzola though. If you happen to see it in the grocery store, it makes a great substitute.

Because its texture is so similar to gorgonzola, you can easily crumble it on salads. It does have a bit more moisture, though, meaning it's a little easier to spread than gorgonzola.

Queso Fresco is the first cheese on this list that doesn't have the same level of intense flavor as blue cheese. It is much milder, though it does have a similar level of salinity which is part of the reason it makes a good substitute. The other advantage it brings is that it crumbles easily, so it's perfect when combined with dishes like rice, stew, or salad.

The great thing about this cheese is that it's mild enough to be enjoyed by anyone. Try incorporating it into dishes that have a more mild flavor, where blue cheese might overwhelm.

Maytag Blue is an American-produced blue cheese with all the strong pungency you'd expect. The reason it makes our list of top substitutes is that it is one of the most common varieties in the states. If you see it on your grocery store shelf, don't hesitate to incorporate it into your recipe.

Fourme d'Ambert is one of the oldest varieties of blue cheese. Its long history comes with a dedication to quality, so you can expect to pay top dollar for it. It is semi-hard in texture, making it similar to many types of gorgonzola.

Because it is so expensive, you probably want to save this variety for your charcuterie board. All you need to go along with it is a plain water cracker or maybe some fruit.

Aged cheddar is a bit different than the rectangular bricks of orange cheese you see refrigerated in the grocery store. The aging process gives it a much sharper flavor—a bit like Parmesan cheese—while retaining the classic taste of cheddar. The longer it is aged, the sharper and stronger it becomes.

Aged cheddar is also much harder than the regular kind, so you may need to grate it to incorporate it into your recipe. It can be good in salads but is made to be eaten as-is.

You'll immediately notice that Shropshire Blue differs slightly from other blue cheese varieties. Aside from its bright yellow color, it has a tangier and nuttier flavor that is truly unique. Still, it makes an excellent substitute for almost any gorgonzola recipe.

The best way to eat Shropshire Blue is plain, especially when paired with apples or pears. Its nutty, caramel notes go exceptionally well with these fruits.

Of course, ranch dressing isn't an ideal gorgonzola substitute in all cases, though it can add the same salty creaminess in the right situation. Of course, it is good on salads when used in moderation, but it can also serve as a base for dips as well.

Ranch dressing succeeds in capturing some of the blue cheese's flavor because it's made with buttermilk. That gives it its unique tang, which accentuates its creamy flavor.

The great thing about Parmesan is that it's available in most grocery stores in whole chunks or pre-grated. Either way, this cheese will add saltiness and a bit of pungency to almost any dish. So if you have a salad or dip that calls for gorgonzola, you won't go wrong with Parmesan.

Of course, Parmesan has a totally different texture than any blue cheese and needs to be grated before it's incorporated into food. It also totally lacks the stronger mold flavors in blue cheese.

Pecorino Romano is another hard Italian cheese that is used in much the same way as parmesan. Grate the cheese onto salads and over pasta, or eat the more expensive varieties as they are. It has a bit of extra tang, which makes it a good substitute for gorgonzola in dishes with stronger flavors.

There are different varieties of asiago, which are harder or softer depending on how long they have been aged. The harder varieties can be a better match for gorgonzola in terms of taste, as they have a bit more tang and sharpness. However, the younger cheeses are generally used for melting and are best eaten plain.

While tofu might not be the first ingredient you think of when substituting for gorgonzola, the right preparation can make it a great vegan alternative. The key is to simulate the strong, blue mold flavors in blue cheese. To do so, you can use probiotics, mold cultures, or yeast, which will all bring out a cheese-like flavor.

You'll be surprised at how closely you can match the flavor, although the texture will differ. For the closest match, go with soft silken tofu, which is the creamiest.

Mozzarella is one of the mildest cheeses around, so it isn't a great option when substituting for gorgonzola in terms of taste. Though if you need a creamy component on your salad or charcuterie board, it can be a good option to consider. Fresh mozzarella has a more rubbery texture, though it retains more of a cheesy tanginess, not unlike goat cheese.

When substituting Swiss cheese, stay away from the precut slices in the fridge aisle, and go with pricier varieties. These will bring more complex flavors, with hints of nuttiness that will serve as a closer alternative for gorgonzola. However, keep in mind that this isn't a great option for all dishes and is best used when you want to eat your cheese plain.

Let's take a quick look at the best substitutes for Gorgonzola cheese. We have listed the most important information you need to know to help you choose which ones would be a great substitute for your recipe.

Blue cheese's characteristic color comes from the mold that is added before the aging process. Called penicillium, this food-safe mold grows throughout the body of the cheese, changing its color, texture, and flavor.

Is blue cheese safe to eat?

Even though blue cheese has mold, it is perfectly safe to eat. The reason is that the mold used doesn't include the myotoxins that would normally make us sick. So as long as it is stored properly and eaten before its expiration date, it's no more dangerous than any other cheese.

How do I store gorgonzola?

Like any cheese or other dairy product, blue cheese needs to be stored properly to keep it fresh. After its packaging has been opened, wrap it tightly in plastic wrap when storing. It can keep in your refrigerator for three or four weeks this way.