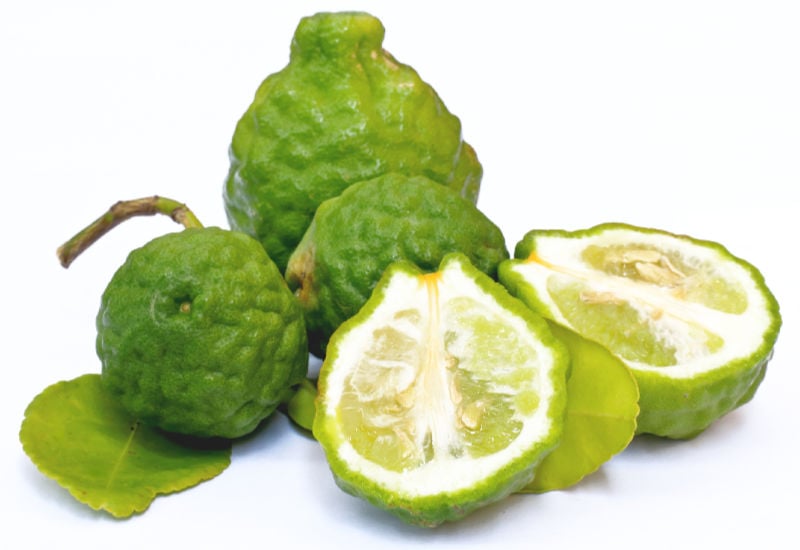 The kaffir lime looks a lot like an unfortunate version of a regular lime, covered in warty bumps. But looks can be deceiving. The Thais have used this ingredient for centuries in their cooking. Soups like Tom Kha are given another layer of flavor thanks to kaffir lime. Are you wondering what a kaffir lime tastes like? In this article, we’ll take a close look at the taste, texture, and aroma of the fruit and its leaves.

The kaffir leaf has a potent citrus flavor that is sour, with a floral undertone. It is best compared to a combination of lime, lemon, and mandarin, and is unique in taste. The leaves of a kaffir lime are a similar texture to bay leaves and are often not eaten when added to a dish. The leaves have a punchy citrus aroma that is usually the first thing to greet you as the food is served in a restaurant.

The bumpy looking fruit has less juice than a regular lime but is usually larger when grown in a tropical climate. The peel is the prized part of the fruit, offering a unique citrusy flavor and a rich perfume. Few other fruits could compare with its potency.

In Thailand, its uses in cooking are well known. Kaffir lime brings delicious complexity to curries when combined with other Thai staples like galangal and lemongrass. If you’d like to learn more about aromatics, including those used in Thai cuisine, check out our aromatics guide. 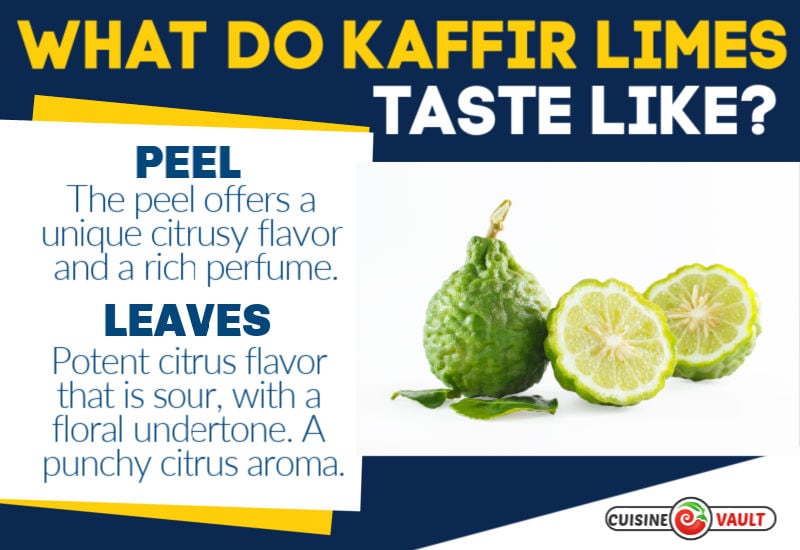 Kaffir lime seems most at home in Thai recipes, although it is widely used throughout Southeast Asia. It provides freshness and balance to soups and curries. Tom Yum soup is a popular appetizer, served in restaurants around the world and it is easy to see how it became popular. It is hard to decide whether the kaffir lime is providing more intense flavor or aroma – they are both very much at the front of the dish.

In Laos, kaffir limes are revered for their usefulness in the kitchen. Homes are often filled with the aroma of a spicey paste called Krueng, which contains kaffir lime. The Indonesians use the leaves in many dishes including Sayur Asam, a fragrant vegetable soup that includes tamarind.

Related reading: Find a good tamarind paste substitute for your next Asian-inspired dish.

When slow cooking food, it is a good idea to bruise the fresh leaves in a mortar and pestle or by crushing with the back of a sturdy knife. It is best to add them whole at the start of cooking. For dry dishes, separate the two leaves that are joined together and chop them into long thin pieces, allowing the dish to get the most possible flavor and perfume. The quick and easy way to sliver them is to use scissors or a sharp knife, and slice all the leaves in one pile on a slight angle. The leaves can also be turned into a pulp by blending in a food processor and combined with other ingredients as a soup paste.

If you’re using dried kaffir lime leaves then use them as you would a bay leaf in dishes with liquid. In dry dishes like a stir fry, add the dry leaves to water and reconstitute before slicing, and adding to the heat.

Hor Mok is often served with a garnish of kaffir lime leaves.

Kaffir lime leaves have a unique flavor and aromatics. If you can’t get your hands on some for your next dish, it is usually best to leave them out. At a pinch, you can use the zest of a lime or lemon to add some freshness. Tahitian limes are also a potential alternative if you can get them.

The kaffir lime has a range of benefits and the Thai people believe it is useful for cleaning the body from the inside out. It is considered to be an excellent digestive aid.

A key compound in the fruit is limonene which is good for helping with acid reflux.

Kaffir lime is packed with antioxidants and also has antimicrobial properties. A kaffir leaf extract is useful when applied topically to reduce inflammation, and the juice is good for dental health. Source.

Where can I buy kaffir lime leaves?

If you live in Thailand then the trees grow in abundance, so sourcing fresh fruit is easy. If you live in other parts of the world and you don’t have a tree, then visit a local Asian grocer and look for fresh leaves. They may also be in the frozen section, and these are also fine for cooking. You can take them home and store frozen in an airtight container or ziplock bag for up to 12 months. When it comes time to cook with them, they can be tossed into the food frozen.

The kaffir lime is a fruit that looks like a bumpy lime, although it is larger and isn’t as round as a regular lime. The kaffir lime leaf has a unique appearance, with two leaves joined together rather than individual leaves. They are a vibrant shiny green color and are useful for extracting essential oils. 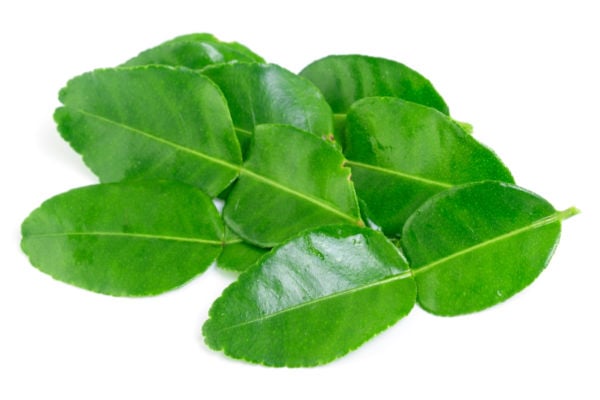 Notice how two leaves join together.

The kaffir lime (aka makrut) is an essential ingredient in many Southeast Asian recipes. It adds flair to soups, stews, and stir-fries with its trademark intense citrusy flavor and aroma. A simple Tom Yum soup sends the senses into overload, long before the spoon reaches your mouth.

As with any overpowering ingredient, remember that less is more. A dish will soon go out of balance with too much added. If it’s your first time cooking with kaffir limes then err on the conservative side and consider reducing the quantity a little. Recipes often provide an authentic flavor bomb that’s too much for a newcomer. It’s better to ease your way into this ingredient or you may never want a part of it again.

What is your favorite Thai dish? Please let us know in the comments below!