Going for a drink with friends can seem impossible for those suffering from acid reflux or GERD. If, after every time you drink, you wake up with severe heartburn, it might be best to ditch the booze altogether. 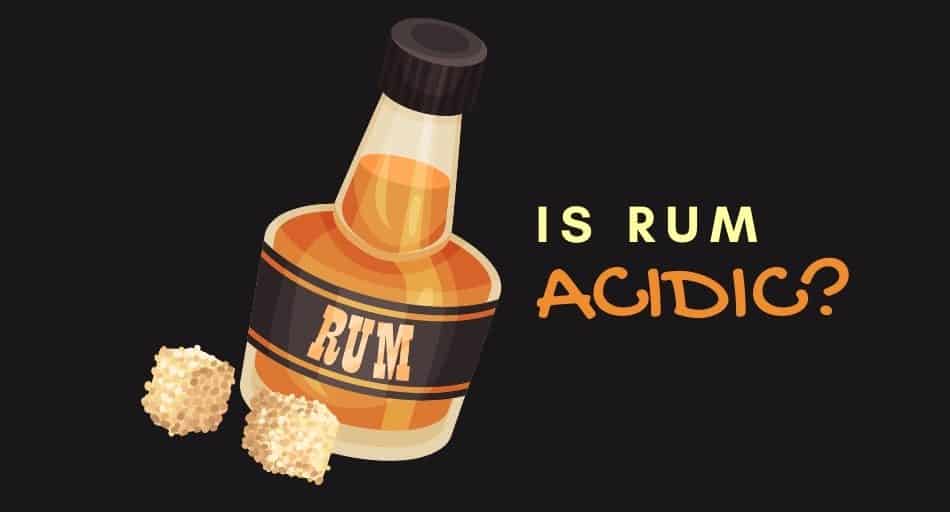 But if your symptoms are minor, you might want to do some research and see if there are some types of alcohol that would allow you to enjoy an occasional drink without experiencing bad symptoms the next day or immediately after.

To do that, you have to know which kinds of alcohol are acidic. For instance, is rum acidic?

Rum has a low pH level and is acid-forming, which doesn't make it a good choice for people with acid reflux or GERD symptoms. It's also very high in alcohol and often consumed in drinks loaded with sugar and other unhealthy additives.

It does, however, come with some good health benefits and is low in calories, so if your body is able to tolerate small amounts of this type of alcohol, you can indulge in it every once in a while.

What is the pH level of rum?

The pH of rum is around 4.8, but it strongly depends on brands and types, such as dark or white rum. The pH level also decreases with the aging of the alcohol, and that's often the case with rum.

Because of the low pH level, alcohol content, and other variables, rum is acid-forming, so it's not very good for people with acid reflux and GERD. It can aggravate your symptoms and make you feel uncomfortable, and let's not forget about the unpleasant hangover the next day if you overdo it.

Another thing to remember is that different brands of rum may have different pH levels. This depends on the distillation process and methods as well as how long it's been aged.

So you might want to do additional research to check whether the brand you've purchased isn't too acidic.

Can rum be good for you?

As an alcoholic beverage, rum isn't healthy. It does come with some health benefits, but it's crucial to remember that it's only possible to reap those benefits if you follow a balanced diet rich in vitamins, nutrients, and minerals (which rum is lacking).

Rum should also be consumed rarely as it's high in alcohol, which has negative effects on your health and can lead to liver damage, stomach problems, and even mental health issues. Because of such risks, it's important to practice moderation.

While you can't say that alcohol is a healthy food, it does come with some potential health benefits. First of all, one shot of rum contains roughly 97 calories, which isn't a lot compared to other types of alcohol.

Foods and drinks high in calories tend to require more time in your stomach to be digested and metabolized, leading to excess stomach acid production. Since rum doesn't contain many calories — and none of them come from carbs, fats, or protein, only alcohol — it won't cause this problem.

Furthermore, some studies proved that moderate drinking could protect you from a stroke. What's more, some compounds in alcohol, including rum, might protect your brain from the effects of a stroke if one does occur.

This is most likely because of the blood dilution that strong liquor provides. It also doesn't increase your heart rate or blood pressure, which makes it even more effective.

Other studies also show that low to moderate consumption of alcohol can improve your mood and reduce the risk of anxiety and depression. But it's all about moderation since excessive alcohol consumption can have the opposite effect, leading to serious mental problems.

It's also important to remember that alcohol, in itself, isn't healthy. It's also very addictive, so if you're already struggling with addiction or similar issues, it's best to avoid it completely to prevent severe health issues.

Can you drink rum while having acid reflux?

While rum is acid-forming, just like other kinds of alcohol, it's all one that's low in calories. It also doesn't contain many additives and preservatives, which other types of alcohol might, so it's less likely to cause indigestion, stomach problems, or bad acid reflux symptoms.

Unfortunately, it's still acidic, so if you're particularly sensitive to acidic foods and drinks, it's best to limit your consumption of this alcohol or avoid it completely.

What type of rum is best for people with acid reflux?

While dark and white rum are both acidic, there are some differences as to how they act once metabolized and digested. Dark rum tends to be aged more, which means that its pH level is lower than that of white rum.

In the same way, darker drinks and types of alcohol are also more acid-forming than their lighter counterparts, making them less suitable for people with acid reflux. Because of that, you might want to stick to white rum instead to avoid worsening your symptoms.

On top of that, darker rum is heavier than white rum, which can affect digestion and how smoothly it travels through your esophagus. In people particularly sensitive to heavy drinks, it might cause irritation and even inflammation, especially if consumed in large quantities.

So, again, white rum might be a better alternative. Likewise, make sure to avoid pre-mixed rum drinks since they're often loaded with acidic juices and sugars that will worsen your acid reflux symptoms and may even contribute to developing some health problems, such as diabetes or high blood sugar.

Because of that, it's best to stick to pure alcohol without any added juices or mixers.

Rum is an acid-forming kind of alcohol that can cause bad heartburn and other acid reflux and GERD symptoms. It also lacks important nutrients and vitamins, so it's basically providing you with empty calories from alcohol.

On the bright side, it's low in calories, which means it won't cause weight gain as other kinds of alcohol might. It also has some potential health benefits as long as you consume it in moderation. So if you can tolerate its acidity, it might be a good drink choice for those with acid reflux or GERD.