Rum has a sweet, toasted sugar flavor that makes it a popular drink for adding to cocktails or mixing into food. If you don’t have any or don’t enjoy the taste, you’ll need a decent replacement. We’ve pulled together a list of rum substitutes for any application.

What are the best rum substitutes?

To replace rum in cocktails or cooking, try brandy, bourbon, or cognac. Each has a similar flavor profile and won’t be out of place in most uses. For a non-alcoholic replacement, use rum extract or molasses combined with a little juice and almond extract. Marsala is a delicious alternative in desserts like tiramisu.

Advice on quantities: Unless otherwise stated, use equal ratios of the replacements listed below as you would use rum.

Brandy will vary in taste depending on its age, brand, and the fruits that get added during production. However, they all tend to have a subtle sweetness and fruity undertone.

Brandy works especially well in sweet desserts. You can use it to replace rum in recipes like fruit cake, truffles, and chocolate mousse. Once mixed with other ingredients, you’ll get a delicious boozy flavor that makes it hard for people to stop at one serve.

Be sure to also check out our article on some handy ways to replace apple brandy.

For cocktails, bourbon makes a great alternative. Whether you’re making a Dark and Stormy or a classic Daiquiri, bourbon won’t fail to disappoint.

Keep in mind that rum is sweeter because it is made with sugarcane and molasses. To avoid blowing out the sweetness, dial back other sweeteners like simple syrups or honey – that is, if they’re part of the recipe.

Be sure to also check out our article on Jim Beam substitutes.

Cognac is a type of brandy that you can consider your Swiss army knife in the kitchen; great mixed into drinks or used in savory and sweet dishes. It’s a little sweeter and spicier, making it a worthy ingredient for adding amazing depth of flavor to sauces and beef stews.

Rum and raisin ice cream is just as good with cognac. You’ll never go back to the original recipe once you try bananas foster with cognac!

For cocktails, cognac is perfect in a Dark and Stormy or a Cuba libre. It’ll also hold its own poured liberally into the fruit punch bowl.

Many recipes call for the use of rum in tiramisu and similar style desserts like a trifle. Ditch the rum and use marsala wine instead. It has hints of vanilla bean and brown sugar that work deliciously in decadent desserts.

Marsala is easy to find in most liquor shops, but you could also use Madeira, a similar style of fortified wine.

Agave juice gives tequila a different taste when compared to rum, but it will still work in many cocktails. A classic Zombie for Halloween or a Mai Tai, when you’re in the mood to party, are both great with tequila.

Tequila can be used to replace rum in cooking. It’s especially useful for adding flavor to seafood like shrimp and oysters. Basically, any Mexican recipe will benefit from a splash of tequila.

If possible, replace white rum with white tequila and dark rum with gold tequila. It’s not a deal-breaker, but you’ll get a slightly closer comparison by doing this.

Depending on where you live in the world, Cachaça may cost a little more than rum, but it’s worth it. Also known as Brazilian Rum, aged bottles have hints of dried fruit and Christmas spices.

Use Cachaça in many cocktails that call for rum, especially a Caipirinha. It pairs well with ginger ale, lime, and orange blossom. You can use this spirit in cooking, but you’re better off choosing a cheaper bottle of brandy for this purpose.

Keep in mind that cachaça is made from fermented and distilled sugarcane, while rum is often made from molasses, a by-product of boiled sugarcane.

Gin is a spirit that gets its flavor from juniper berries. While this provides a unique taste, it’s a handy rum backup option in cooking and for light-colored cocktails that use white rum. The botanical flavor of gin is excellent with a mojito or pina colada.

Use gin for adding something extra to poultry, pasta, and fish recipes. You can also use it to great effect in preserves and in baking autumnal pies.

Gin is floral, herbaceous, and full of flavor. It will easily overpower your dish so use less than you would rum.

Cooking sherry is a low-cost way to replace rum in desserts and sauces. It is a sweet fortified wine that you could use in bread pudding or Xmas pudding.

Like brandy, if you use it as a substitute then consider reducing the sugar if it’s part of the recipe. You don’t want an overly sweet dessert.

If you want an alcohol-based replacement, but don’t enjoy the flavor of rum, try amaretto. It is a popular liqueur with an almond flavor that’s ideal mixed into chocolate sauce. It also provides a new feel to Cuban rum cake. Pear tarts are incredible with a solid splash of amaretto.

If you need a low-alcohol rum alternative, then your best option is rum extract. They usually contain ingredients like alcohol, water, rum, and natural flavor. The taste is concentrated so only a small amount is required and there is negligible alcohol content.

Use rum extract anywhere that regular rum is called for. Cookies, banana rum cupcakes, pies, rubs, and marinades are all well-suited for rum extract.

Feeling thirsty but don’t want to feel the effects the next day? Make a Spice 75, Daiquiri, or Pineapple Caipirinha mocktail with rum extract. You can also add a little extra kick to lattes and eggnog with this extract.

Tip: For the best flavor, choose a good quality extract; to completely remove the alcohol, use a rum essence. Add one teaspoon of extract to replace a tablespoon of rum.

Molasses is a useful no-alcohol option for replacing dark rum. To round out the flavor, stir in a few drops of almond extract and a splash of your favorite juice. Pineapple, apple, or orange juice are all fine.

If you’re in a pinch, vanilla extract will help you finish a dessert recipe without rum. You won’t get the same depth of flavor, but it’ll still taste good and won’t have any alcohol content.

Juices have sweetness and acidity that make them suitable for adding to dressings, marinades, and vinaigrettes. Apple, orange, or white grape juice are all possibilities, but you'll get a completely different end-result by leaving out the rum. 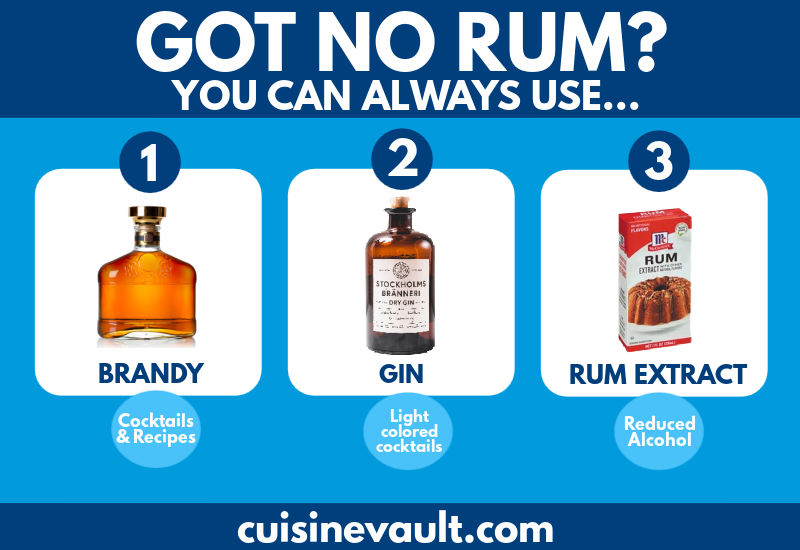 Related reading:
Best replacements for Chambord.
How do I replace lillet blanc?
What are some useful substitutes for RumChata?

What can I use as a rum extract substitute?

To replace rum extract in recipes you can use rum to get a similar flavor. For a non-alcoholic option, try imitation rum, vanilla extract, or vanilla essence which are useful in baked goods and desserts.

Most popular brands of rum extract, like McCormicks, contain rum in small quantities. Cooking the extract will reduce the alcohol content further.

Which rum is best for cooking?

While everyone has their own preferences, many chefs agree that aged, dark rum is excellent for cooking. Its strong flavors are delicious in pork, stews, puddings, and baked treats.

Does rum cook out of food?

When rum is heated, its alcoholic content reduces over time. Although a significant amount of the alcohol gets cooked out, some will remain.

Replacing rum isn’t a big challenge. Try everyday drinks like brandy, bourbon, or tequila for alcoholic cocktails. For cooking, marsala and brandy will both work great.

Flavorwise, rum extract is the closest you'll get, but it does contain a small amount of rum. For alcohol-free options, use molasses, fruit juice, or vanilla extract.