If you suffer from acid reflux, you know how unpleasant the symptoms can be. You have to be careful about the foods and drinks you consume to avoid any unnecessary flare-ups. 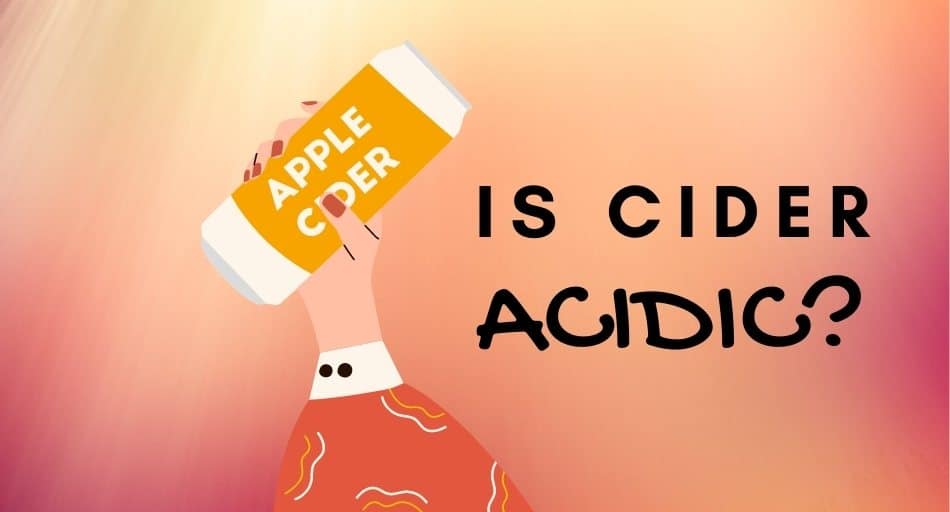 This can be particularly difficult when you're going out as it's hard to control the acidity of the foods and drinks in restaurants and bars.

If you enjoy an occasional alcoholic beverage, you've probably wondered which ones are least likely to cause more uncomfortable symptoms. For example, is cider acidic?

Cider is a somewhat acidic alcoholic beverage due to the fermentation process and a high concentration of apples. It also has acid-forming properties that can irritate and inflame your esophagus and stomach, leading to heartburn and other acid reflux symptoms.

Luckily, cider contains some essential minerals and compounds that can help you offset the harmful effects of the low pH, thus protecting your digestive system from damage.

It's also a healthier alcoholic alternative to vodka and other strong liquors that may damage your liver and stomach, leading to cancer and other issues.

What is the pH level of cider?

The cider has a pH level ranging between 2.9-3.3. It's relatively low due to the apple content and the fermentation process. It also means that it might worsen the symptoms of acid reflux and GERD in some people, particularly those with a severe form of these conditions.

On the bright side, cider contains some essential micronutrients that can help you stay healthy and protect your stomach and digestive system from inflammation and damage caused by stomach acid. So consuming cider might be helpful as long as it's in moderate amounts.

It's also worth noting that some people notice an improvement in the frequency and severity of their acid reflux and GERD symptoms after drinking apple cider vinegar and even cider.

Experts believe that this is most likely due to the anti-inflammatory and antioxidant compounds that these two contain—because of that, indulging in cider every once in a while might lower your risk of developing a severe form of acid reflux.

Can cider be healthy?

Cider is made from fermented apples, so it contains many health benefits, mostly coming from this nutritious fruit. It is relatively caloric as it has around 200 calories in one bottle or can. Most of these calories come from carbohydrates, such as sugars, which can lead to spikes in your blood sugar levels if consumed in large quantities.

Because of that, it also might cause gain weight if you drink it too frequently, which is not a big issue with other alcohols that don't contain any sugars.

Generally, cider has a moderate alcohol content ranging from 3% to 8.5%, depending on the fermentation process and other additives. This isn't a lot if you compare it to liquors such as vodka or rum. Because of that, cider might be a better choice to avoid a massive hangover the next day.

Alcohol is also unhealthy when consumed in large quantities as it can cause many health issues, so cider can help lower this risk considerably.

Cider contains many vitamins and compounds that can protect your liver and kidneys from damage caused by alcohol.

On the bright side, cider is an excellent source of vitamin C. This micronutrient, also known as ascorbic acid, helps your body heal wounds and boosts your immune system. It also forms collagen and helps with collagen absorption. It's beneficial for the proper growth, development, and repair of your cells and tissues.

Cider is also loaded with antioxidants that come from both the apples and the fermentation process. These antioxidants help prevent and reduce oxidative stress and damage to your cells by flushing out free radicals.

Some research also suggests that these compounds — mainly found in cider — also lower the risk of certain types of cancer, heart disease, and diabetes due to their anti-inflammatory properties. As a result, indulging in an occasional glass of cider might actually be healthy.

Despite all of these benefits, it's important to remember that cider still contains alcohol, so it can lead to nausea, hangover, and even addiction if you consume it regularly and in large quantities. Because of that, make sure to control your intake of cider and other alcoholic drinks to avoid these problems.

This is important because alcohol damages your body and has negative effects on your mental health. If you're struggling with alcohol addiction, make sure to contact your doctor and seek help, as it can have severe consequences for your health and life.

Can you drink cider while suffering from acid reflux?

Drinking cider while suffering from acid reflux shouldn't cause too many issues due to the high apple concentration. This is because apples contain many vitamins and minerals that help counteract the negative effects of cider acidity.

What's more, many people recommend drinking apple cider vinegar to combat light to moderate symptoms of acid reflux or GERD, and cider contains similar compounds, so it might help as well.

Apple cider is still an acid-forming beverage, which means that it might aggravate acid reflux and GERD symptoms in some people, particularly those with severe cases of these conditions.

Due to the fermentation process also contains alcohol, so it can inflame and irritate your esophagus and stomach lining.

Because of these risks, make sure to listen to how your body reacts to cider and stop drinking it if you notice some unpleasant symptoms.

Cider is an acidic alcoholic beverage that might irritate your stomach and lead to increased stomach acid production. As a result, it might be best to limit your intake of this drink, especially if your symptoms are severe. Cider does contain some impressive health benefits and lots of vitamin C, though, so it might be a better alternative to beer or vodka if you're planning a night out.