Chai tea is a delicious and popular tea option at coffee shops. But if you need a buzz, you might wonder if chai tea contains caffeine. 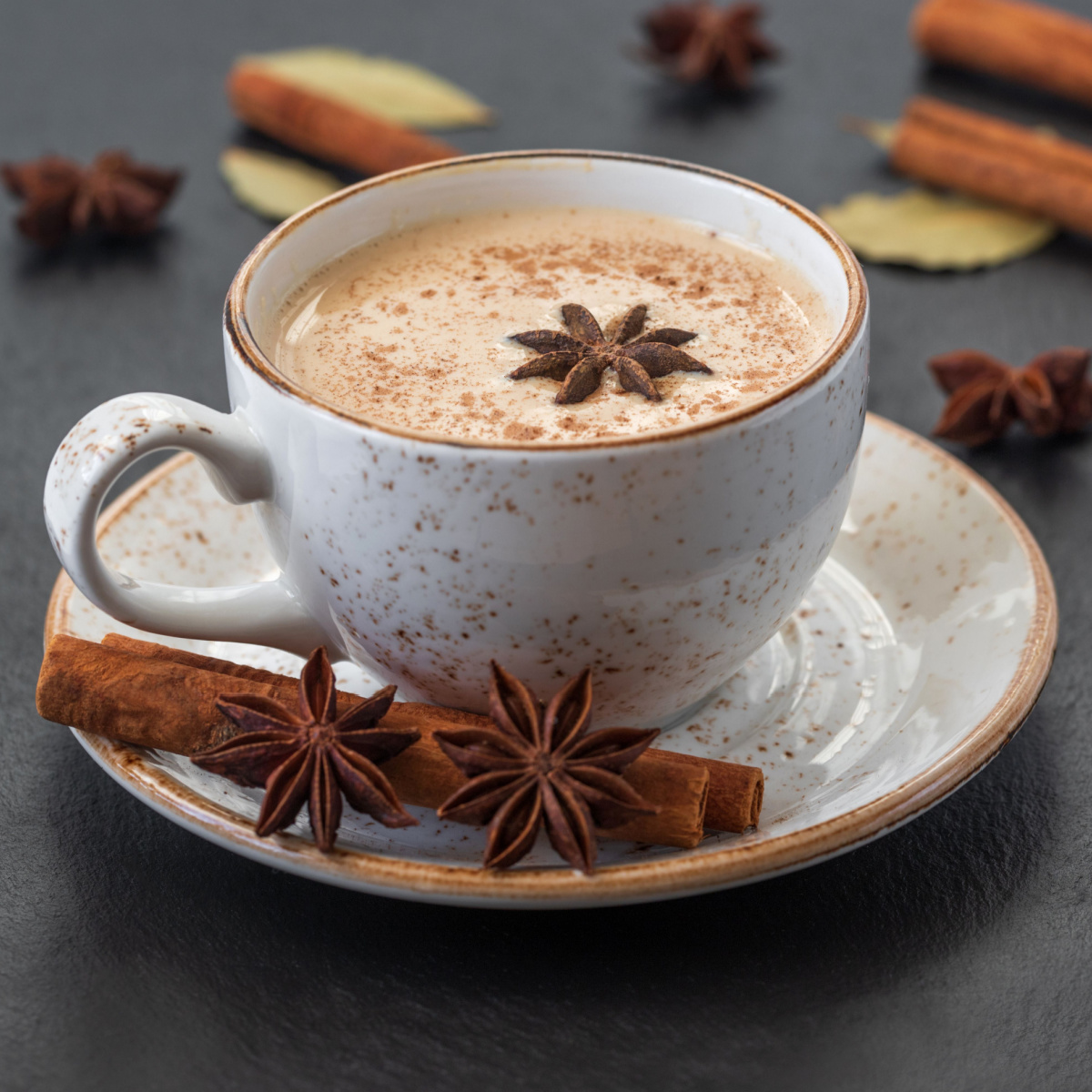 Chai tea can have 25 to 55 milligrams of caffeine per serving. The primary caffeine source comes from black tea leaves, which have various health benefits.

This article will teach you all about the caffeine in chai tea so you can decide if it’s the right beverage for you. You will also learn about the health benefits of drinking a tasty cup of chai tea.

What is in Chai Tea?

Chai tea is a black tea accompanied by various spices that originated in India. The spices may include any combination of the following spices:

You can check the tea packaging to determine which spices were used in your chai tea.

A popular way to drink chai tea is in the form of a chai tea latte, which combines chai tea with steamed milk and sometimes sugar or syrup.

Depending on your preference, you can get chai tea in loose-leaf form, concentrate, or various powdered variations.

How Much Caffeine is in Chai Tea?

Loose-leaf chai teas steeped for longer periods can have up to 55 milligrams of caffeine per eight ounces.

Many people use pre-made chai tea latte powder to make chai tea. In these cases, the caffeine concentration may be less as the overall concentration of the tea is generally not as strong.

Chai tea concentrates are also lower in caffeine compared to loose-leaf tea options. Without the black tea leaves in the whole form, not as much caffeine will be infused into the drink.

But when it comes to tea, chai tea is overall one of the higher caffeine options available.

How Can I Make Sure I Get the Highest Amount of Caffeine in My Chai Tea?

Some of us like our caffeine. And if you enjoy chai tea and want the most caffeine you can get out of it, you have a few options.

If you use a loose-leaf tea option, you can get the most caffeine by simply steeping it for longer.

The longer you steep the tea, the more caffeine will seep from the tea leaves into the water.

If you’re using a powder form or chai tea latte powder, just use more scoops to get more caffeine.

In both cases, keep in mind that adding more powder or steeping for longer will affect the flavor of your drink. But if it’s caffeine you’re after, you can juice the chai tea for all its worth with those tips.

Where Does the Caffeine in Chai Tea Come From?

Black tea is one of the strongest teas when it comes to caffeine. This is in part because of the oxidation process.

Black tea leaves are exposed to oxygen for a long time, giving them a dark appearance. This exposure to oxygen and how well the tea leaf infuses into liquid is why researchers think black tea has more caffeine.

Needless to say, chai tea is a good choice if you’re looking for a tea with a higher caffeine content.

How Does the Caffeine in Chai Compare to Coffee?

This means that you may feel less of a caffeine buzz when compared to coffee. But chai tea may be a nice step down or replacement option if you’re trying to limit caffeine intake.

Do They Make Decaf Chai Tea?

To produce decaf chai tea, they decaffeinate the black tea leaves. This will eliminate most of the caffeine, but not all of it.

The average cup of decaf chai tea latte has 4 milligrams or less of caffeine in it. If you love the taste of chai but want to skip the caffeine, decaf chai tea may be the option for you.

If you’re a chai tea lover, odds are you’re familiar with the Chai Tea Latte at Starbucks.

The most ordered size is grande, which is 16 ounces. Because the grande-sized Chai Tea Latte has about two cups of chai tea, it has 95 milligrams of caffeine.

This means a grande-sized Chai Tea Latte may get you closer to the caffeine amount you’re accustomed to in a smaller cup of coffee.

However, all the added sugar, milk, and honey make this drink calorically dense. A grande-sized Chai Tea Latte has 240 calories. So, keep all these factors in mind next time you order that tasty drink.

While the caffeine in chai tea is a nice benefit, there is a wide range of health benefits that come from drinking chai tea. The health benefits are primarily due to the black tea leaves.

Research shows that drinking black tea in any form may reduce your risk of a heart attack and promote improved cardiovascular health.

Black tea has also been associated with a reduced risk for diabetes and anti-aging effects.

Chai tea with no additives also has no calories. This may make it a healthy weight loss or weight management drink option. However, chai tea lattes with milk and sugar do have calories.

With all the health benefits of chai tea, it’s clear why people have been drinking it for thousands of years.

Chai tea, in all its forms, does contain caffeine. An eight-ounce cup of chai tea can have 25 to 55 milligrams of caffeine.

The caffeine in chai tea comes from black tea leaves. The oxidation process of the black leaves gives chai tea its higher caffeine content compared to many other teas.

You can make your chai tea as caffeinated as possible by steeping it for longer or using more scoops of powder. If you want to skip the caffeine, they also make decaf versions of chai tea with 4 milligrams of caffeine or less.

Chai tea has much less caffeine than coffee. However, a grande-sized Chai Tea Latte from Starbucks comes closer to the caffeine in a small cup of coffee because it’s the equivalent of two cups of chai tea.

Chai tea has various health benefits that extend beyond its caffeine content. But if you’re looking to cut back on caffeine or an afternoon coffee replacement, chai tea might be a great place to start.