It can be easy to confuse different spices, especially with so many similar-sounding names like coriander, cayenne, and cardamom. Two that you may have overlooked are cumin and caraway, a pair of unique seasonings with their own distinct place in cooking. 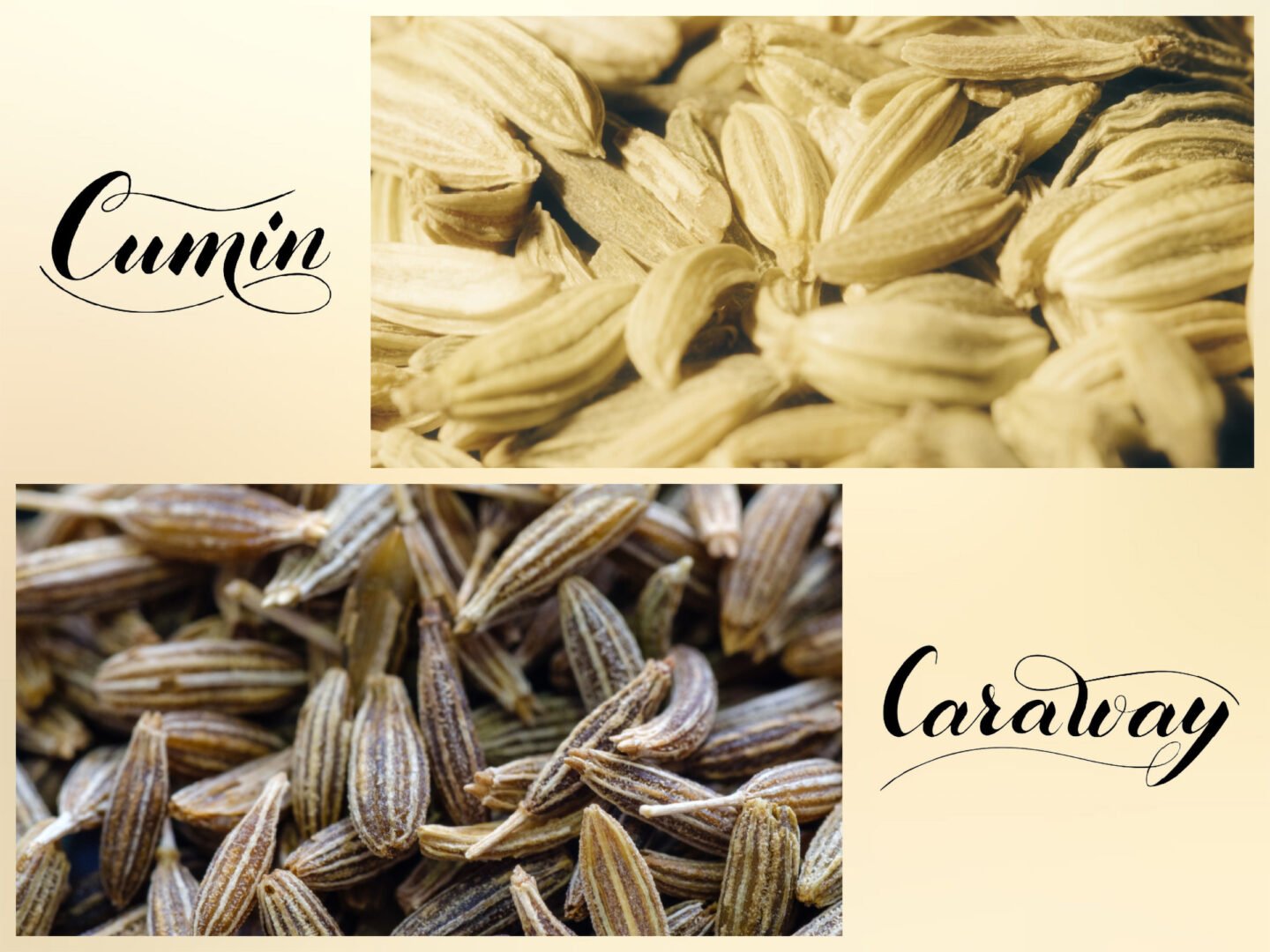 There is plenty more to learn about each of these spices below!

Cumin is one of the most popular spices in the world, used in Indian, Latin American, and Middle Eastern cuisines. They are harvested from the plant Cuminum cyminum, the long, narrow seeds of which are dried and packaged. Cumin is sold in its whole form as well as in its ground form.

Cumin's flavor could be described as earthy and nutty. In some cases, it has a slightly smoky flavor and maybe even a bit of bitterness. This makes it a good match for warm, spicy dishes like curry.

In its whole form, cumin looks like a long, pointed seed with a brown color similar to that of fennel seed and caraway. They can be distinguished from caraway in that they are a bit longer, thicker, and lighter in color.

Cumin is high in both iron and potassium. While it does also contain trace amounts of magnesium, calcium, and protein, it doesn't have enough to have a major impact on health. At the same time, cumin doesn't contain any harmful compounds either.

While regular cumin doesn't offer a wealth of health benefits, black cumin seed oil has been used to treat a variety of different ailments.

Uses of Cumin in Cooking

Cumin doesn't just make an appearance in Indian, Latin American, and Tex-Mex dishes, it's often the starring role. Its earthy and spicy flavor makes a good pairing for beef and a range of other savory dishes with a deep flavor. You can find it as a seasoning in sausage, chili con carne, and garam masala spice blends.

Caraway may look similar to cumin, but actually, this spice isn't a seed at all, but the dried fruits of the caraway plant. It is most often used in food from North Africa and the Middle East, as well as in traditional medicine.

Since caraway is a dried fruit, it has a more aromatic flavor than cumin. Its overall taste is actually quite complex, comprising nutty, peppery, citrusy, and bittersweet elements. Once you become familiar with its taste, you'll have an easy time identifying it in foods.

It may be difficult to distinguish caraway from cumin at first glance, as they both look like small, elongated seeds. However, if you look at them side by side, you'll see that the caraway is much smaller, only about 2 mm in length. A closer look will reveal that they are darker in color and have smoother skin than cumin.

There's a good reason why caraway has long been used for medicinal applications. The dried fruits are full of vitamins A, B, C, and E, as well as iron, calcium, zinc, and magnesium. They are also a good source of dietary fiber.

Uses of Caraway in Cooking

Caraway is used in a wide variety of different dishes, including curries, stews, and baked goods. You can find it commonly used as a flavoring in rye bread. Their unique flavors blend well with other spices that are used in their home region, like cinnamon and cumin.

Can You Substitute Cumin and Caraway for One Another?

While these two spices may look similar, you probably don't want to use them interchangeably in your cooking. For one thing, cumin has a much stronger flavor and will tend to overpower dishes that call for caraway. Caraway, on the other hand, is best used alongside milder flavors to add a subtle aniseed taste.

If you're looking for a good substitute for cumin, try coriander or curry powder. If you want to substitute spice for caraway, fennel is a good bet.