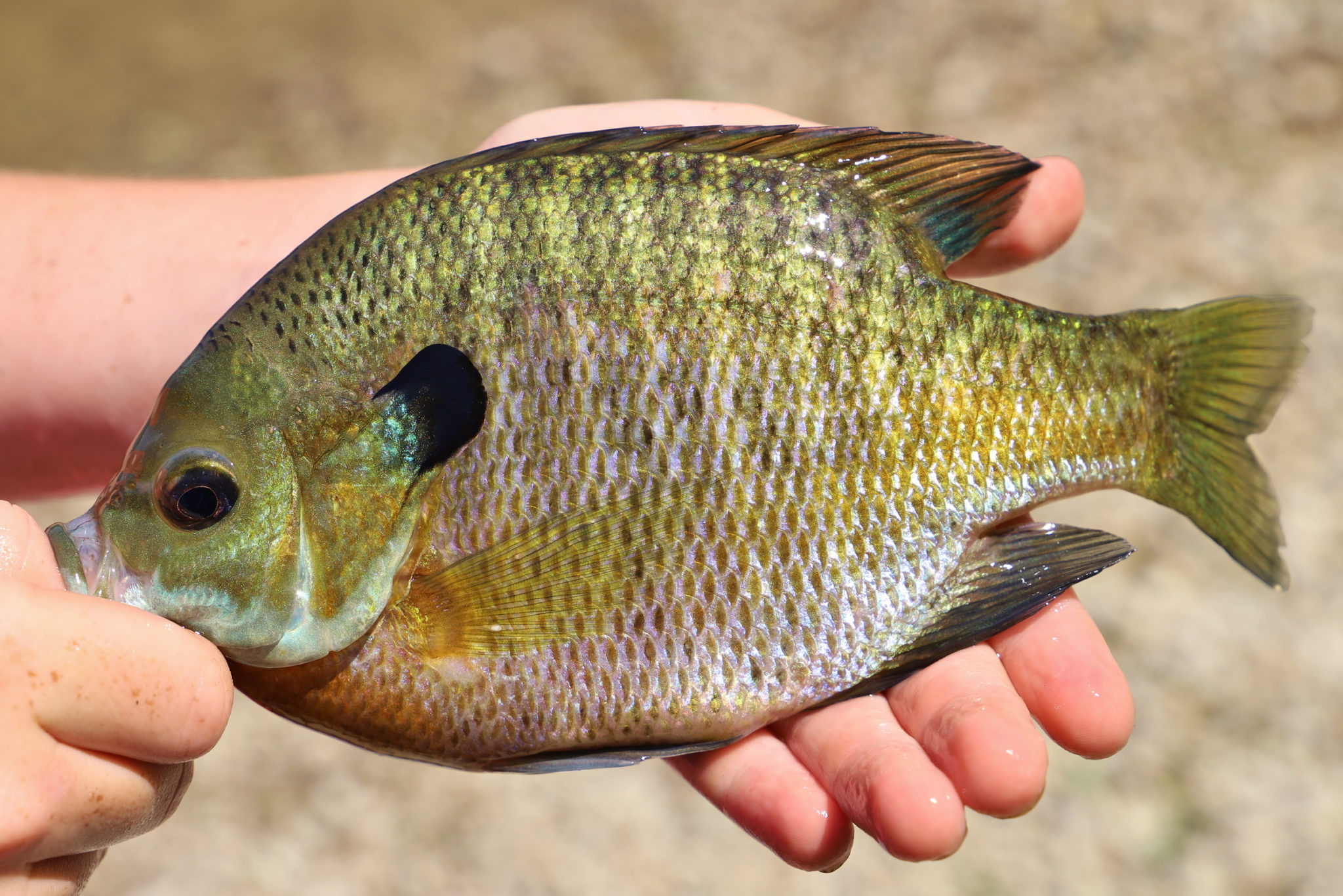 Bluegill may be one of the most commonly caught freshwater fish in North America, snagging hooks in ponds, lakes, streams, and rivers. Though as plentiful as they are, not everyone knows whether or not they're good to eat.

Can you eat bluegill? As any experienced angler will tell you, yes, you can. Bluegill has a varied diet that makes them resistant to the pollutants that may contaminate bottom-feeding fish.

If you're thinking of frying up a batch of bluegill fillets, you may want to study up a bit. Take a look at our guide on eating bluegill and learn more about its flavor, health benefits, and preparation.

Bluegill, also called bream, is a freshwater fish found in the streams, rivers, lakes, and ponds in the eastern half of the Rocky Mountains. They grow up to 12 inches long and about 4 ½ pounds and can be identified by their orange belly and green bands down the side. They have a varied diet that includes insects and smaller fish.

Their omnivorous diet is one of the reasons they're safe to eat. Unlike fish that eat things they find on lake and river bottoms, they are less susceptible to being contaminated by dangerous substances. In addition to being eaten by humans, bluegills are an essential part of the diets of many other fish.

There's a reason why bluegills are one of the most commonly enjoyed campsite meals. They're plentiful across the continent, often easy to catch, delicious, and safe to eat.

Anglers and seafood fans knew the bluegill as "panfish," which refers to the most common way to prepare the fish. All it takes is a bit of oil, salt, and an open flame, and they can make a hearty meal.

Can Bluegill be Eaten Raw?

Bluegill is safe to eat raw as long as it is fresh and prepared correctly. However, like most freshwater fish, it doesn't have a great flavor unless it's cooked. Most fish used in sushi or sashimi come from the ocean.

Another factor to consider is that freshwater fish are more susceptible to bacteria and parasites than saltwater fish. For this reason, it's always safest to cook them to 140 degrees Fahrenheit before enjoying them.

What Parts of the Bluegill Can I Eat?

The FDA recommends cleaning the fat and skin from locally-caught fish before eating. That is because any pollutants found in their water are most likely to accumulate in these areas.

If you want to play it safe, it may also be good to avoid the internal organs. For example, mercury is known to accumulate in fish brains and eyes. Generally, though, the bluegill is regarded as safe, as harmful chemicals are most likely to accumulate in larger, long-lived fish.

In any case, most of the flavor and nutrients in bluegill are found in the meat. So it's easy to enjoy a fresh-caught meal without worrying about pollutants entering your food.

As far as freshwater panfish go, bluegill ranks among the highest in terms of flavor. It has a firm and flaky texture, which stays light and delicate when prepared correctly. They are mild in flavor and are generally considered superior in taste to crappie or perch.

The only downside of eating bluegill is that they are relatively small. At six inches on average, they take a bit more cleaning and preparation to make a meal.

Like most fish, the bluegill is an excellent source of lean protein and is considered healthier than poultry or red meat. In particular, a three-ounce portion of bluegill is just under 100 calories and has an even lower fat content than other fish.

The fat they have contains Omega 3 fatty acids, a heart-healthy form of fat with many benefits. Omega 3s help fight inflammation, lower blood pressure and reduce the chance of heart attack and stroke.

In addition to the benefits described above, a 3-ounce portion of bluegill also contains healthy levels of:

Where Can I Find Bluegill?

Depending on where you are in the country, bluegill may be more or less difficult to find. For example, since this fish is native to the east of the Rocky Mountains, it's more difficult to find on the west coast.

Bluegill probably won't be found in the fish department of your local grocery store. However, as more people learn the benefits of freshwater fish, they appear more commonly in specialty fishmongers. As a result, they will often be relatively inexpensive when you find them, as little as $5 per pound.

When buying fish, the best way to check for freshness is by smelling it. Fresh fish should never smell fishy. When yours has a strong odor, better give it a hard pass than risk getting sick.

While bluegill isn't always easy to find at your local grocery store, they are much easier to find in your local stream or pond. They are most commonly found near banks, bridges, fallen timber, or weed beds. They are most easy to catch in summer, but they can be found in colder months with a bit of patience.

Even if you're not an experienced angler, bluegill can be a great place to start. They are easy to catch with small hooks. Their natural curiosity will draw them out of hiding with most types of lures or bait.

If you're catching your bluegill rather than buying it from a fishmonger, you will have to learn to clean it. All it takes are a few simple pieces of equipment, including a cutting board, a dull knife for scaling, a sharper knife for cutting, kitchen shears, and a trash can.

Use a dull knife to remove the scales from the fish's skin. Move the blade from tail to head, and watch as the scales fly from the edge of your knife. When done, run your hand over the skin's surface to ensure none remain.

Be careful when descaling your fish, as bluegill has a natural defense mechanism. They are covered on the top and bottom with spines. While not poisonous, they can give you a painful poke.

Now, use your sharp knife and cutting board to remove the head. Make the cut just behind the gills. You can either discard the head or save it to make a stock.

Once the head is removed, use your sharp knife to cut down the fish's belly. Start at the tail and move carefully down the middle of the belly. Don't cut do deep, or you may puncture the internal organs and make a mess.

This is the most challenging part, especially with relatively small fish like bluegill. Using the sharp knife, split the fish down the middle. Once you remove the tail, you will be left with two separate fillets.

As long as your bluegill is properly cleaned and prepped, they are easy to cook. There are endless ways to enjoy them, but the most common and simple is to fry them in a pan.

If you're cooking bluegill for the first time, try keeping it simple to enjoy its natural flavor. Season liberally on both sides with black pepper and sea salt. Don't worry about putting too much as most of the seasoning will come off in the pan.

Heat a few tablespoons of olive oil in a frying pan and heat over medium-high. Place your fillets skin side down into the pan and cook for two to three minutes, depending on the size.

When it's time, use a thin spatula to scrape your fillets from the bottom of the pan and flip. Make sure to take extra care not to damage the skin or flesh while doing so! After another two minutes, your fillet will be ready to enjoy.

Once you have cleaned your bluegill, there really is no wrong way to cook it. They are known as panfish because they are easily cooked in a frying pan over an open fire. Bluegills can taste great when you sauté them with salt and pepper over the fire, or you can wrap them in foil and bake them on the hot coals with Italian seasoning.

Does bluegill have parasites?

Like most freshwater fish, bluegill does occasionally have parasites. The most common kind are flukes in their larval stage. These can be seen as cysts on the flesh of the fish.

Why does bluegill meat have black spots?

If you see black spots on the flesh of your bluegill, you may not want to eat them as this is a sign of a common parasite. However, as long as the fish is cooked thoroughly, it is safe to eat.