Bell peppers, or capsicums, are a sweet type of bell-shaped pepper that pop up in recipes everywhere. The unripe version is green, but they gradually transform into other colors such as yellow, red, and orange. If you don't enjoy the flavor of bell peppers or you simply can't get hold of any, then you're going to need a replacement. We've pulled together a list of our favorite bell pepper substitutes so that you can finish any recipe without them. Let's dive in and take a look at some useful ideas. 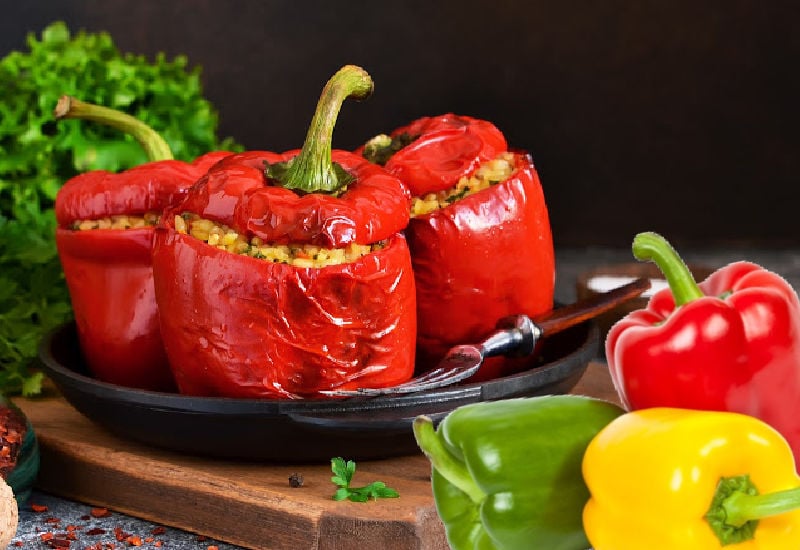 What can I substitute for bell pepper?

If you want to replace bell pepper in a recipe then the best options are Poblano, Cubanelle, or Anaheim peppers. They are excellent if you want to mimic the original flavor and texture. Although they all have more spiciness than bell peppers, they are still mild and family-friendly. Zucchini and broccoli are two useful choices for anyone that doesn't enjoy the bell pepper and is looking for something different.

We suggest that poblano peppers should be your first port of call if you're looking for a bell pepper substitute. They share similar features such as thick walls that are meaty and hold their structure well even when cooked. Their large internal cavities make them perfect for stuffing, a common use for bell peppers.

You will find that poblanos lack the grassy flavor that green bell peppers provide. They also have less sweetness when compared to yellow or red bell peppers. However, these differences may not be a bad thing, as many people don't enjoy these characteristics anyway.

Poblanos carry a mild heat which most people will easily be able to deal with. As a comparison, they are spicier than a bell pepper but much milder than a jalapeno. In the United States, poblano peppers are becoming more mainstream and large supermarket chains often range them next to bell peppers.

Cubanelle peppers are slightly sweet, crunchy, and have a very mild heat. They will make an excellent replacement in casseroles, salads, or as a topping on pizza. They can also be diced and used as part of a mirepoix. Although the walls of a cubanelle are thinner than a bell pepper, they are useful for stuffing with meat, spices, and other vegetables.

Cubanelles are a little spicier than a bell pepper but milder than a poblano. If you buy them before they have fully ripened they are a light green shade. We recommend using a cubanelle pepper if you're avoiding the assertive grassy flavor of a green bell pepper or the sweetness of a red bell pepper.

Anaheim peppers give a slightly fruity, peppery flavor to dishes and have a delicious crunchy consistency when raw. Once cooked their sweetness intensifies and they develop a smoky, tangy undertone. Like the poblano pepper, they have thick walls which makes them ideal for stuffing.

Although these peppers are spicier than a bell, they are still mild and most people will tolerate their heat. At their hottest, an Anaheim pepper compares to a jalapeno that is on the milder end of the scale. 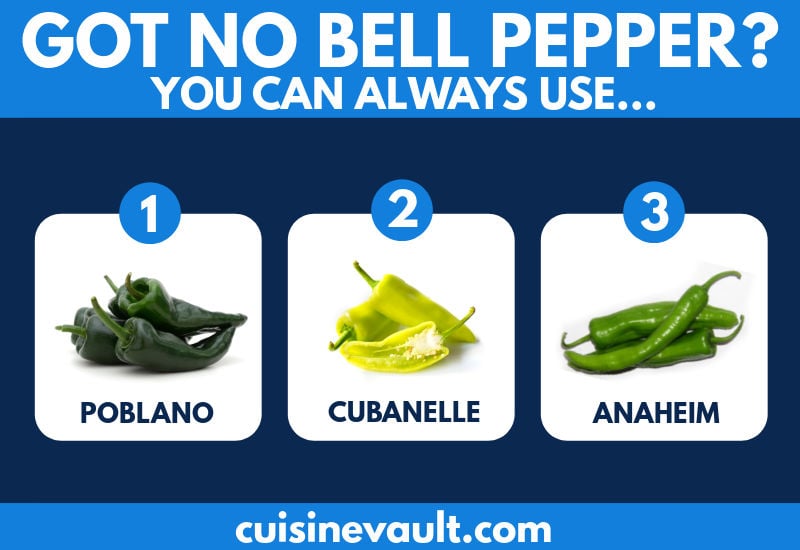 The pepperoncini is another pepper that is mild, sweet, and tangy. They are a yellowish-green color with wrinkled skin and a bulbous shape. Although it is possible to stuff them, their walls don't hold up as well; we recommend the Poblano or Anaheim for this purpose. Banana peppers are often confused with the pepperoncini so if you’re unsure how they differ then check out our comparison of the pepperoncini and banana pepper.

The jalapeno is an excellent bell pepper substitute if you're looking for something with a little more spice without the sweetness. People that struggle with hot food may not enjoy this option as they are considered a medium heat chili. If you can look past the heat, you will find green jalapenos share similar grassy notes as a green bell pepper. Besides the heat factor, the other noticeable difference is the size. Although it is conceivable that you could stuff a large jalapeno, the bell pepper is larger and more suitable.

Pimiento (aka pimento) peppers are heart-shaped sweet in flavor and have a similar shade of red to ripe bell peppers. They are smaller than a bell pepper and won't be ideal for stuffing; however, they are excellent sliced up and added for color and flavor to stir-fries, chili beans, casseroles, or anywhere else you would use bell pepper.

Pimientos can be purchased fresh but they're also sold in jars. If you choose the preserved option, you won't get the same vibrant color or crunchy texture.

Are you looking for an alternative to bell pepper that has a completely different look and taste? Zucchini is a great choice that will fit into most recipes that call for any color of bell pepper. Add it to your cooking for a more subtle flavor.

Zucchini is a versatile ingredient that can be cooked in virtually any way you choose. They’re delicious when stuffed! Instead of adding sweet, herbaceous taste to food, it takes on the flavors of the other ingredients. Zucchini can also add color to stir-fries and provides texture to casseroles or any savory baked dish.

Related reading: What is the difference between a zucchini and a cucumber?

A common complaint about bell peppers is that their texture becomes soft and slimy once cooked. If you want a super-healthy vegetable that holds its shape and crispy bite once cooked then broccoli may be worth considering. A member of the cabbage family, this veggie holds up well to high heat cooking such as stir-frying. A scattering of florets into baked dishes or blanched for a side dish, broccoli will add an earthy, slightly bitter taste to a meal.

The skins of a bell pepper are the main culprit for people who suffer from indigestion. If you enjoy their taste but can’t eat them, try chargrilling them over your stove’s gas flame or grilling them. Hold the pepper with tongs and rotate it slowly until the skin becomes black. Allow cooling then peel off the skin before adding to food.

Did you know?
A green bell pepper hasn’t yet had the chance to ripen and has a mild grassy flavor. As the pepper ripens it transforms into other shades such as yellow and red. Aging allows time for the sugar to develop so the pepper will have a sweeter flavor with less bitterness. Although there are subtle differences in each color, it is okay to use different colored bell peppers interchangeably in recipes.

Related reading:
Learn how to chop a bell pepper.

Although bell peppers can be found in any supermarket, that doesn’t mean seeking out an occasional alternative isn’t worth your time. Whether you want a similar-tasting pepper with slightly more heat or a completely different flavor, replacing them in recipes is straight forward.

To replace bell peppers with something that is a close comparison, then try Poblano, Cubanelle, or Anaheim peppers. They are all mild, kid-friendly options with less sweet, grassy flavor. Zucchini and broccoli will work in most dishes if you want a completely different flavor and texture. Other possibilities we didn’t mention above, but are worth checking out, include Bull’s Horn peppers and dried bell peppers. Sliced celery could also be used as a filler ingredient to add bulk to slow-cooked meals.

Do you have a suggestion for a useful bell pepper substitute? Please let us know in the comments below.