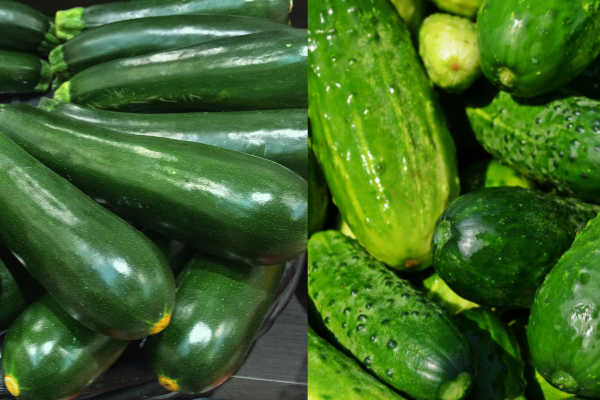 Although they look similar at first glance, when comparing zucchini vs cucumber you’ll discover they are actually quite different. Taste, consistency, usage in the kitchen – they’re like chalk and cheese. Let’s take a look at what makes these two “vegetables” different and review any similarities they may have.

Fun Fact: The cucumber and zucchini are both actually a fruit as they have seeds and result from a flower. However, in the kitchen they are used as a vegetable.

Prefer to watch rather than read? Check out this video...

Cucumbers are a crisp, juicy vegetable that can be eaten raw, skin and all. They taste slightly sweet with a faint melon aroma. The initial flavors are followed up with a soft bitter taste that isn’t overpowering. 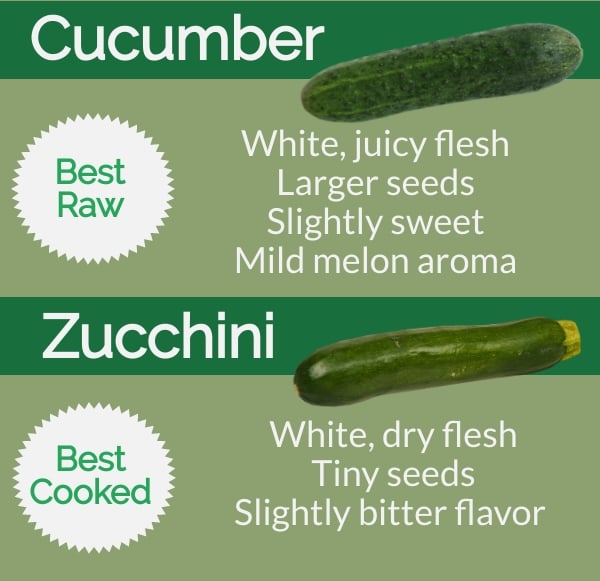 Leave the skin on for extra color and texture.

Zucchinis, also known as courgettes, are virtually flavorless although there is a mild hint of earthy, bitter flavor. They contain less juice and tend to have relatively small seeds in the center, when compared to the cucumber.

Cukes are usually eaten raw; however, if you decide to cook them you’ll find they soften and lose what little taste they had when raw. If you're interested in learning more about cucumber preparation then check out our beginners cutting technique video here.

Zucchini also softens when cooked and will take on a slightly sweet taste as well as absorbing the flavors of other dominant ingredients it is cooked with. Even when simply cooked with butter, the zucchini will soak up this flavor making a potentially delicious side dish. Zucchini will never overpower a dish, instead taking on the role of reliable sidekick.

The raw cucumber has soft, juicy flesh encased in a crispy skin; the seeds are usually larger than the zucchinis although they are fine to eat.

Zucchinis have a tougher flesh that can be eaten raw, but is much improved by cooking until tender.

Zucchinis can range in size from the length and width of a small cucumber through to a melon! In fact, a zucchini left on the vine to ripen will transform into a marrow. At this stage, it is easy to tell them apart. However, in supermarkets the zucchini is a size that is comparable to a cucumber which makes it more difficult. 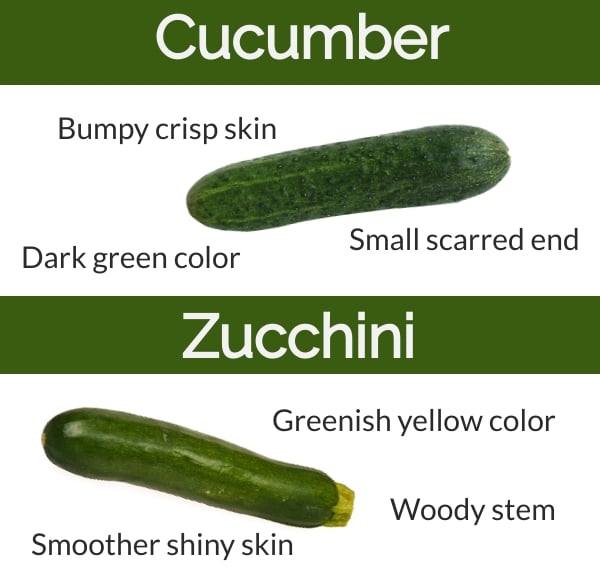 The difference in gloss and texture is clearly visible.

The flesh of a zucchini is dry and whitish yellow in color with very small seeds; although the interior of a zucchini is firm, it is still soft and easy to cut through. A cucumber has a thicker skin and a white colored crisp, juicy inside. Towards the center the flesh becomes soft and there are larger seeds. As a cucumber matures on the vine the seeds grow larger.

Related articles:
Find out how to freeze zucchinis.
What are some useful winter melon substitutes?
What does cucamelon taste like?
What are the best chayote substitutes?

The zucchini is a variety of squash which originated from the Americas. It wasn’t until the late 1800’s that the Italians developed the zucchini into a format that we recognize in the shops today.

The cucumber is a member of the gourd family and is believed to have been cultivated in India over 3000 years ago. It is believed that North America began producing cucumber in the 1500s.

Best uses in the kitchen

In most cases, cucumbers are prepared raw and zucchinis are cooked. The texture of raw zucchini isn’t pleasant unless sliced very thinly. Cucumbers offer a refreshing, crispy addition to dishes if they’re left raw. Few recipes call for them to be cooked as they soften and lose their biggest strength – crispness.

With both of these vegetables it is usually best to keep the skin on. This where much of the nutritional content is found; the skin also adds color and texture to the dish.

The flowers of both the cucumber and zucchini are edible. Use them to make fritters; stuff them with a mixture of ground beef, onions and chili; in salads or simply as a garnish. 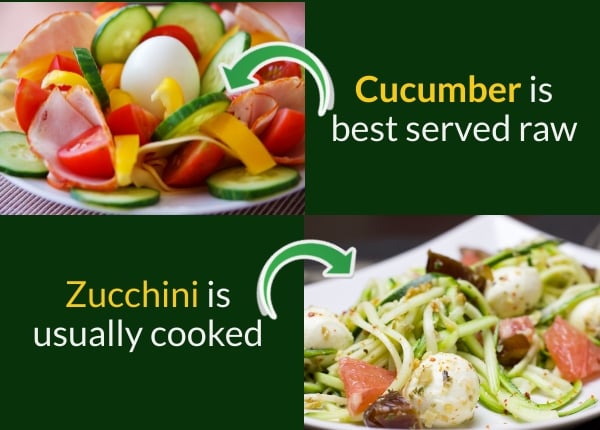 When comparing cucumber vs zucchini it looks like they’re fairly similar, perhaps even from the same family? In fact they’re not.

There are some similarities: if harvested at the right time they can look a similar size; they’re also a similar shape and color. At a stretch you could argue that they both have very mild, almost bland flavor profiles.

Even with these similarities, they are actually very different and each has its own use in the kitchen. You certainly couldn’t substitute one for the other like you might consider doing with hoisin and oyster sauce or camembert and brie. The best way to sum up these two ingredients would be: cucumbers are best eaten raw and offer crispy texture and freshness to food. Zucchinis are best cooked and they excel at taking on the flavors of other stronger flavored ingredients in the dish.