Bell peppers are juicy fruit used in a wide variety of meals: side veggies for dinner, stuffed with meat and cheese, or a replacement for bread if you're eating a low-carb diet. No matter which diet plan you follow, bell peppers are delicious, so they're a staple in many people's dishes. However, how healthy are bell peppers actually? 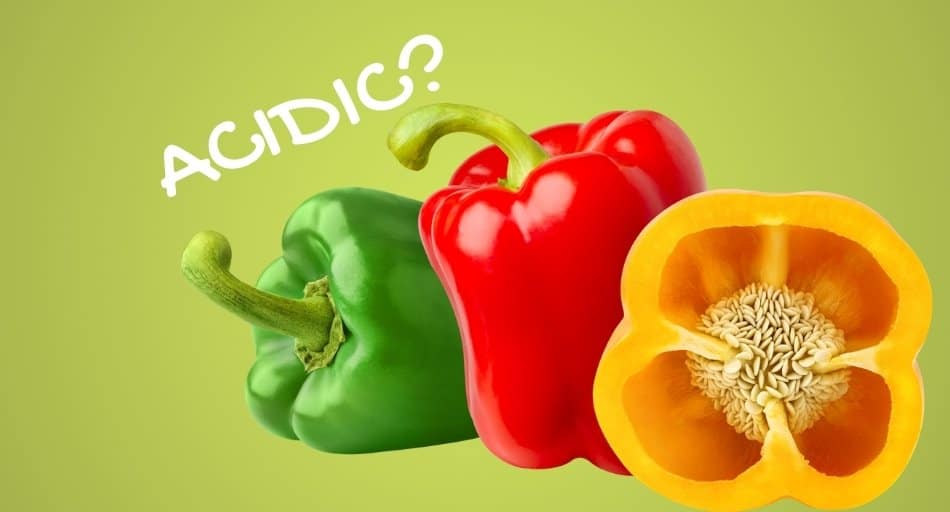 Are bell peppers acidic or alkaline?

Bell peppers aren't really acidic and lean towards alkaline. Additionally, bell peppers don't contain capsaicin which is the substance that gives hot peppers their spice and heartburn-worsening properties. In fact, people who struggle with acid reflux should consume antioxidant-rich foods, and bell peppers are rich in this substance.

What is the pH level of bell peppers?

Generally, the pH level of bell peppers ranges between 4.65-5.45. This means that it's relatively low in acid, making bell peppers a good food to consume when experiencing acid reflux since they won't make your condition worse.

Red, green, and yellow bell peppers have the same pH level, while more ripe fruit tends to be higher on the pH level chart.

The red bell pepper is also sweeter than its green or yellow counterparts. It also contains more betacarotene, a very healthy nutrient that our bodies transform into vitamin A.

The sweetness of the red variety of bell peppers doesn't affect the pH level, though, so it's safe to consume on a low-acid diet.

How healthy are bell peppers?

Bell peppers are primarily comprised of water (92%) and contain high levels of vitamin C and antioxidants. They're also low in calories and don't contain too many carbohydrates, making them ideal fruits to add to any diet, especially a low-carb one.

Fiber makes up around 2% of a bell pepper's fiber content, making the fruit a good source of this healthy carbohydrate.

What's more, bell peppers are loaded with vitamins and minerals, such as vitamins C, B6, and K1, which contribute to healthy gums, the formation of red blood cells, and blood clotting, respectively. In addition, this fruit also helps heart health due to the presence of potassium.

When it comes to antioxidants, bell peppers are very rich in a variety of these substances. Antioxidants help remove free radicals from your body, keeping it healthy and maintaining the proper functioning of your immune system. Some antioxidants included in bell peppers can also prevent heart disease and certain types of cancer.

Since bell peppers are mild, alkaline fruits, they aren't bad for acid reflux. Generally, they don't worsen any symptoms of acid reflux or GERD, so they're safe to consume for people struggling with these issues.

Sometimes, though, bell peppers can cause heartburn, especially when consumed in high quantities, so it's best to limit this fruit if your GERD symptoms are severe.

Due to their alkaline pH level, bell peppers aren't harsh for our digestive systems. Nevertheless, if your stomach is particularly sensitive, it might be a good idea to remove the skin off your bell peppers before eating.

This is because the skin of bell peppers is hard to digest and very tough on your stomach.

Hence, it's best to consume bell peppers steamed as then it's easy to remove the skin without any trouble.

Paprika is a spice made from dried and crushed bell peppers. It has a lower pH level than raw bell peppers, making this spice even more alkaline.

In fact, many people struggling with GERD can safely consume paprika even if they don't tolerate raw bell peppers.

This also has a lot to do with the fact that bell peppers in fruit form are harder to digest than the spice that's grounded.

As a result, when eating paprika instead of bell peppers, you consume fewer peppers in one sitting, keeping it light for your stomach.

Banana peppers are bell pepper's close relative. They have the same pH level, making them as alkaline as bell peppers. They are a good alternative for people who don't tolerate bell peppers or the ones that are looking for an alternative in taste or size.

Banana peppers also seem easier on the stomach for people with GERD, so they are definitely worth trying.

All bell peppers — red, green, and yellow — have the same ph level. However, green pepper isn't ripened yet. Red bell peppers are the sweetest, and simply put, they're the ripened version of the green pepper.

Yellow peppers are in between these two, making them more or less ripe.

Even though there's no difference in the pH level and acidity, green bell peppers are harder to digest because they're not ripe yet.

As a result, people who struggle with indigestion might want to opt for red or yellow bell peppers and maybe even remove the fruit's skin.

Even though raw bell peppers are more alkaline than acidic, different people have different reactions to this fruit and all the forms in which it can be consumed.

As a member of the nightshade family, bell peppers can cause heartburn for some people, but not all. In the same way, some people respond well to eating this fruit raw, and they can't tolerate it when cooked. Others experience the exact opposite situation.

The effect that bell peppers have on you depends on the severity of your GERD, whereas most people with acid reflux tolerate bell peppers very well. It all comes down to trial and error and figuring out what works for you and what doesn't. After all, there are many healthy foods that not everyone can tolerate.

Bell peppers are fruits low in acidity, making them a good addition to your diet if you're struggling with acid reflux or GERD. However, it's always important to remember that each person responds to foods differently.

So if you notice that bell peppers give you stomach issues, it's best to exclude them from your diet and replace them with another alkaline food.

READ NEXT: 15 Alkaline Foods You Should Include In Your Diet