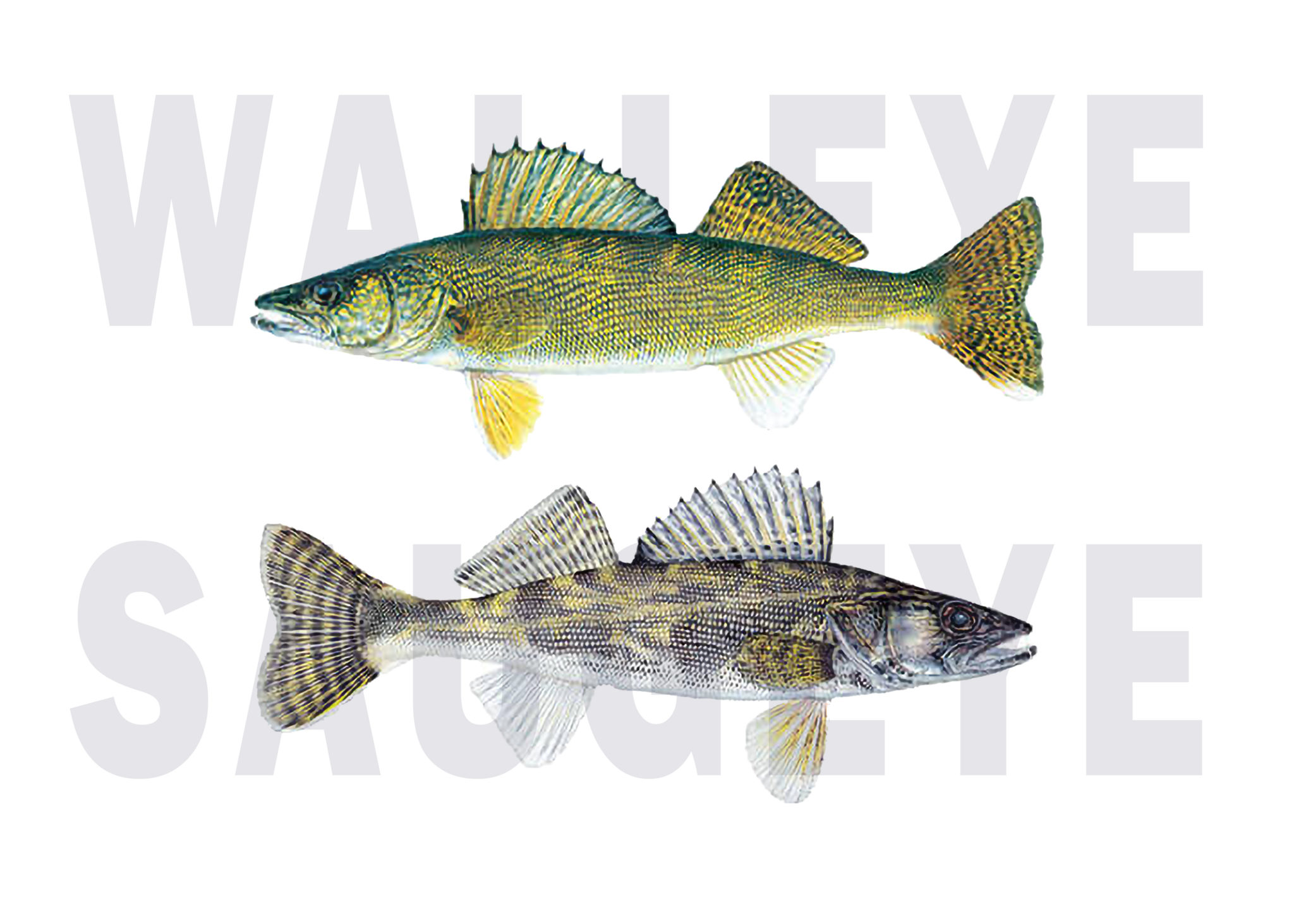 The main difference between a walleye and a saugeye is that walleyes prefer cool, calm waters, while saugeyes prefer warm, turbid waters. However, since they are closely related, both fish are very similar. They only slightly differ in appearance and taste.

But although they appear similar at first glance, there are ways to tell a walleye and saugeye apart. In this article, you will learn how to differentiate between a walleye, sauger, and saugeye. I will also compare the shapes, sizes, tastes, and textures of walleye vs. saugeye.

What is a Walleye?

A walleye (Sander vitreus) is a freshwater perciform fish native to Canada and North America. They can be found in the Great Lakes, especially Lake Erie, the walleye capital of the world. Many consider them to have one of the best flavors among freshwater fish. They can be fried, baked, grilled, broiled, steamed, or poached.

The walleye is often compared to its close relative, the European zander (Sander lucioperca), which is also known as the pikeperch. Walleyes are also sometimes called yellow pike; however, walleyes and zanders belong to the perch family, not the pike family.

Walleyes thrive in northern lakes and rivers and prey on smaller fish like minnows, trout, and yellow perch in cool, deep water. They can be elusive and difficult to catch, but walleyes are prized table fare despite it. Walleye fishing is best done at dusk since this is when walleyes begin hunting their prey.

What is a Saugeye?

A saugeye (Sander canadensis × vitreus) is a natural hybrid fish born from a female walleye and a male sauger. Saugers (Sander canadensis) are another freshwater fish that are often confused with walleyes and saugeyes. All three are closely related and are very similar in appearance and taste.

This hybrid walleye displays the distinct features of both parents but also has characteristics, unlike either parent species. They are as aggressive as the walleye but adapt well to warm water like the sauger. Saugeyes are often stocked in turbid reservoirs since neither parent tolerates turbid water as well.

Saugeyes can be found in the Mississippi River and Ohio River, where walleye and sauger congregate. However, they are more often found in Ohio reservoirs, where saugeye stocking is done to keep their numbers up. While saugeyes are fertile, their spawn is insufficient to maintain a healthy population.

Anglers will find that live bait, such as a minnow, works best when catching saugeye. Like walleyes, they like to feed near the bottom of the water body they reside in.

How do you know if you have walleye, sauger, or saugeye?

At first glance, the walleye, sauger, and saugeye may look the same, especially when young. But if you look closer, you will start to notice their differences.

Since all three have a similar shape and size, the best way to know if you have a walleye, sauger, or saugeye is to check its body markings. Look closer at their dorsal fins, cheeks, tail tips, and sides.

The three fish have different colors, but it can be difficult to tell the kind of fish just from its color since that varies with the water’s turbidity. Walleyes are olive or golden in color and have a white belly. Saugers usually have a dark color ranging from brown, gray, and black, while the color of saugeye may range from light brown to gold.

A better way to know is to take a look at the sides of the fish. The walleye has two dark bars from its back, sides, and to its eyes, while the sauger has a row of dark spots on either side of its body. If the fish has both spots and bars, it is a saugeye.

Additionally, the walleye and the saugeye usually have a white tip on the bottom of their tail fin. If it doesn’t, it’s a sauger. Saugeyes also tend to be larger than both other fish, making them a popular catch among anglers.

Walleye vs Saugeye: Taste and Texture

The walleye is considered one of the best-eating fish. It has a clear, mild taste with a bit of a sweet aftertaste. It's delicate, moist, and tenderly flaky. It has a high oil content, but it isn’t oily, unlike salmon or tuna.

Walleye also have few bones, making them even more popular among fish lovers.

Saugeye tastes like a cross between walleye and sauger. It is a lean, mild white fish with large flakes and medium firmness. Saugeyes have the best combination of sweet, nutty, and earthy flavors. They aren't boney, and they have a very distinctive taste.

What tastes better: saugeye or walleye?

Both walleye and saugeye are great fish for eating. However, despite some people calling walleye the best-tasting freshwater fish in the world, many locals prefer saugeyes over walleyes. This might be partly due to the freshness, but they believe that sauger and saugeye taste a little sweeter than walleye.

Ultimately, both are excellent table fare, no matter which one you prefer. Note that they both taste best while sized around 12 to 18 inches.