Most commonly used in Mexican cuisine, tortillas have become a worldwide sensation in the past years. 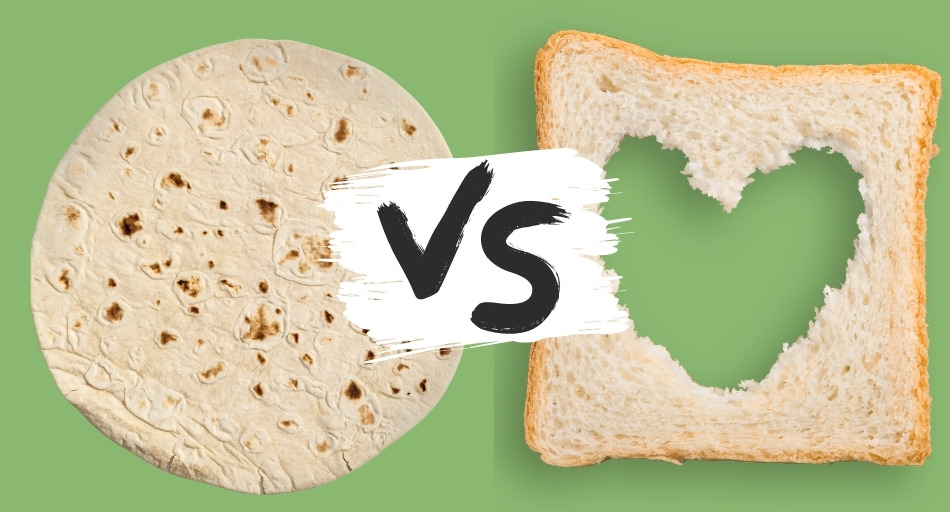 They can be made using various ingredients, although most commonly, they consist of either corn or regular flour.

A lot of people these days use them as a wrap for food, creating a kind of sandwich.

So, it begs the question: Are there some health benefits to eating tortillas over bread? Are tortillas better than bread for your health?

Are Tortillas Better Than Bread?

Generally, tortillas weigh more and are larger than a single slice of bread. As a result, they contain more calories. So, if your goal is weight loss, you might want to stick to whole-wheat and whole-grain bread.

On the other hand, tortillas, especially whole-grain ones, are a great source of fiber and several other nutrients. This makes them a good addition to a balanced diet as long as it’s in moderation.

Is bread worse for you than tortillas?

As with bread, whether tortillas are bad for you depends on how they’re made. Baked goods made using refined flour generally don’t contain many nutrients.

This is because the grains in them are stripped of minerals and vitamins. So, if you want to reap the most health benefits from both bread and tortillas, choose whole-grain and whole-wheat types.

Also, make sure to check if tortillas are made with vegetable oil instead of fat shortening, as those are very bad for your health.

When comparing bread and tortillas in terms of their health benefits, you have to be aware that there are many varieties of both baked goods.

So, it’s very hard to decide which one is better. One thing you can look for is additives, which are most often present in pre-packaged bread and tortillas.

These are added to foods to ensure that they can stay on shelves for a long period of time.

So, if you want to choose the healthiest tortillas and bread, pick the freshly baked kinds if you have the option to do so.

That way, you can be sure that there are as few preservatives in the final product as possible.

Tortillas also tend to contain more carbohydrates in general. While carbs have received a bad rep in recent years, they are your body’s primary source of energy.

So, they’re still important to consume, especially if they are complex carbs. For example, one flour tortilla contains 23.6 g of carbs, while a single slice of white bread has only about 12.7 g.

What’s more, a large number of the carbs found in white bread comes from starch, which is an important carb. For example, it helps with digestion, satiety, and energy levels.

Are tortillas good for you?

One of the most abundant nutrients found in both corn and flour tortillas is fiber. This type of carb is important for digestion and heart health.

It also helps soak up excess stomach acid, preventing the development of acid reflux and GERD symptoms like heartburn.

Eating a lot of high-fiber foods, including whole-grain tortillas, can also help you feel full after eating, which can contribute to healthy weight loss.

But still, remember that tortillas are rather high in calories, especially flour tortillas. So consume them in moderation if you’re trying to lose weight.

Flour tortillas, in particular, are a great source of iron. This mineral is used for various bodily processes, such as general energy, gastrointestinal function, immune system, and body temperature regulation.

Iron also helps create hemoglobin, which is a protein in your red blood cells that helps transport oxygen throughout your body.

Most people don’t get enough iron from their diets, and this can lead to anemia. So, make sure to consume a lot of high-fiber foods.

Tortillas, especially made with corn, contain a great amount of phosphorus as well. It helps build strong teeth and bones, especially in connection with magnesium.

Phosphorus is also responsible for filtering out waste from your kidneys and preventing kidney stones.

Aside from that, this mineral can even help reduce muscle pain after exercise, so it’s often added to vitamin waters and post-workout drinks.

Most high-phosphorus foods include poultry, organ meats, and seeds, but whole grains are also a great source.

Unlike flour tortillas, corn tortillas are gluten-free. As a result, it can be a great replacement for people who enjoy eating foods made with tortillas but cannot tolerate gluten. In those people, gluten causes an autoimmune response, which can lead to severe digestive system issues.

So, opting for corn tortillas is a great way to go around it. But make sure to read the ingredient list carefully, as some brands still contain some gluten.

What types of tortillas are the best for you?

If you’re looking for a low-calorie tortilla, it might be best to choose corn tortillas. A single tortilla generally contains around 60 calories, which is much lower than a flour tortilla.

Corn tortillas are still a great source of fiber, vitamin B6, phosphorus, and magnesium.

They’re also gluten-free, which is beneficial for people with gluten sensitivity or celiac disease.

Because of that and the minerals they contain, they don’t provide you with empty calories and can be a great part of a healthy, balanced diet.

Corn tortillas are also more authentic when it comes to Mexican cuisine.

Additionally, make sure to choose healthy ingredients to incorporate into your tortilla. For example, try to avoid fatty foods like sauces and creams, as these provide mostly empty calories.

Instead, opt for foods like avocados, tomatoes, cucumbers, lettuce, lean protein (turkey, poultry, or fish), cilantro, and other leafy greens.

These ingredients contain powerful antioxidants that help prevent various diseases, such as diabetes and even cancer. They’re also loaded with fiber and vitamins, contributing to your overall health.

In general, it’s very hard to determine whether tortillas or bread are healthier simply because there are too many varieties of these two baked goods.

But, if you want to choose the healthiest option, whether it’s bread or tortilla, stick to whole-wheat and whole-grain varieties, as they’re much higher in nutrients.

Also, make sure to choose healthy and clean ingredients for the inside of your tortilla and avoid eating too many tortillas from fast food joints.