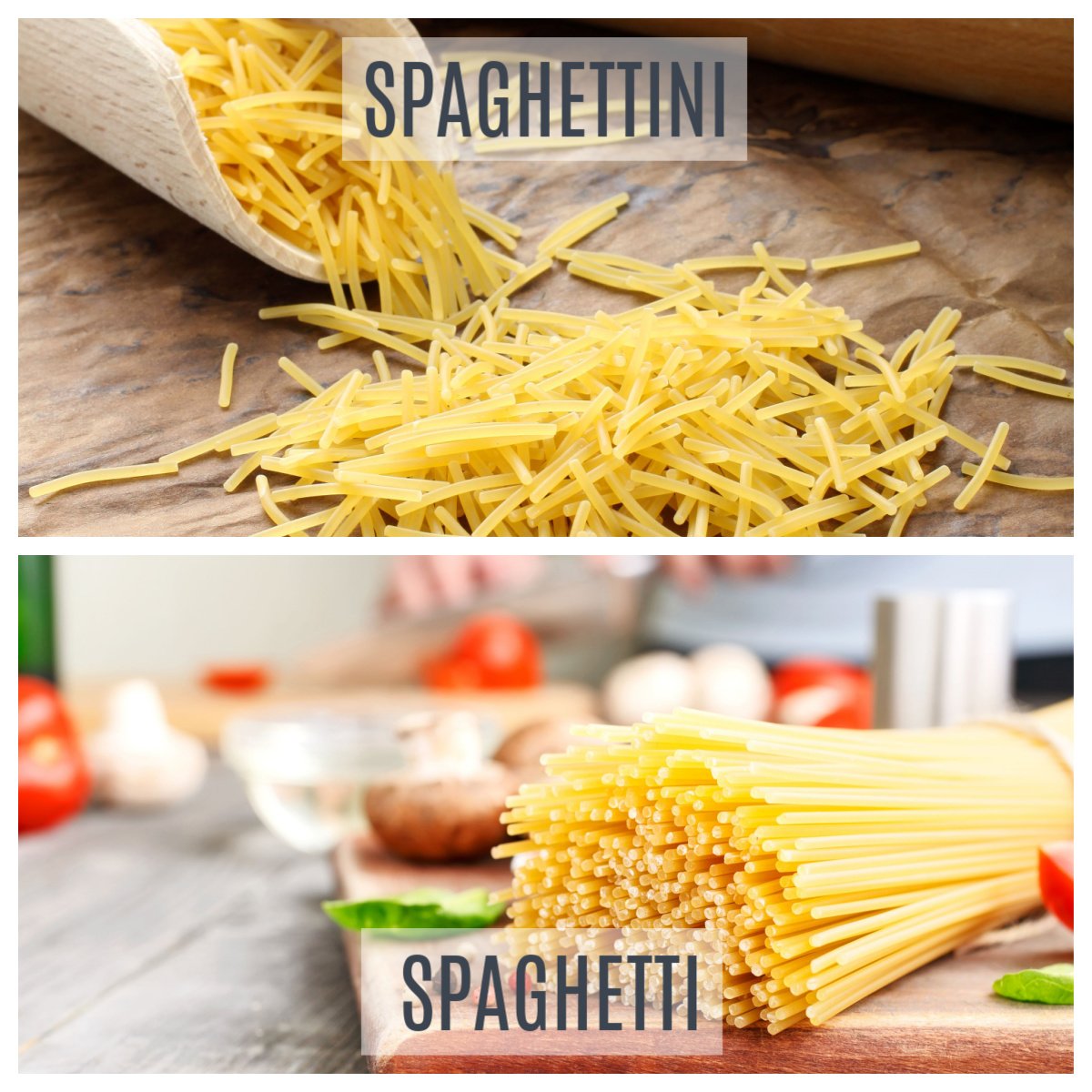 This article will cover the basics of spaghettini and spaghetti and explain their differences to help you raise your pasta game.

What is the difference between spaghettini and spaghetti?

The biggest difference between spaghettini and spaghetti is the thickness of the pasta! While they are both thin and long noodles, spaghettini is even thinner than spaghetti! Spaghettini is faster to cook as well.

Pasta is typically divided up into groups based on their shape. Some pasta shapes include short (like bowties, elbows, and penne), shells (including traditional shells and manicotti), lasagna, filled (such as ravioli and tortellini), soup (which includes ditalini, orzo, and pastina), and long.

Spaghetti and spaghettini are both types of long pasta. Long pasta is very versatile - they can be enjoyed both by picky eaters and food connoisseurs, they can be paired with both hearty and light sauces, and they provide people with a sense of home and comfort.

Spaghetti is just a long and thin piece of pasta and it is a staple in many dishes of Italian cuisine. This pasta is typically lighter in color due to it being made with refined flour, but spaghetti can also be made with whole wheat flour which leads it to have a darker color.

RELATED: What Is Tabasco Sauce? (All you need to know)

Spaghettini, which is pronounced "spuh-get-ee-nee," is a refined and delicate take on spaghetti. This pasta is often used in a seafood-based dish (such as with tuna or salmon) or in an oil-based sauce, but like any type of pasta, spaghettini can be used in any dish and with any type of sauce.

The pasta company Barilla recommends using spaghettini with simple light sauces, such as a light tomato sauce, with broths or soups, with a light dairy sauce, such as parsley, or in a consomme which is a clear soup that is made with concentrated stock.

Spaghettini has many benefits over traditional spaghetti. Spaghettini provides people with an excellent source of energy and it contains iron and B vitamins, which are both great for your health. Spaghettini also has a low glycemic index.

The glycemic index (GI) is a ranking of carbohydrates in foods, based on how they affect the levels of glucose in the blood.

Foods with a low GI, like spaghettini, are digested slower, and that works to help keep you feeling fuller for longer.

RELATED: Is Bread Acidic? (How Bad Is It)

While both of these types of pasta are similar, they both have different benefits. Spaghetti is easier to cook than spaghettini, because, since spaghettini is so thin, it has a quicker cooking time. This makes it hard to perfect because it can be easily overcooked.

If spaghettini gets overcooked, it can become a big, sloppy mess. It can end up getting all stuck together and it becomes almost inedible.

For most varieties of spaghettini, it is recommended that you cook the pasta for about ten to eleven minutes without the lid on the pot, stirring occasionally.

Spaghetti is a bit easier to cook, but it can also get overcooked if you leave it cooking for too long. Spaghetti is often cooked with the lid on the pot (taking it off occasionally only to stir it) for about twelve to fifteen minutes.

Both of these types of pasta pair nicely with different sauces. Spaghetti has medium-density and is traditionally served with simple sauces.

Some of the most popular sauces for spaghetti include marinara, olive oil, pesto sauce, wine sauce, or a buttery sauce.

Since spaghettini is thinner than spaghetti, it is best with light sauces, such as a vegetable-based sauce (like a garlic and herb sauce or a buttery spinach sauce) or a blush sauce (which is a mix of marinara and Alfredo sauces).

Even though spaghettini seems different than the regular pasta you cook, you can likely find it in one of your favorite pasta brands at your favorite grocery store.