Mortadella is a mild-flavored Italian sausage or luncheon meat that is made from smoked pork. During processing, the meat is finely ground and cubes of pork fat are added along with other flavors like black paper, pistachios, and occasionally myrtle berries. It originated from Bologna in Italy but this large sausage is now popular around the world.

Many people find mortadella is delicious eaten raw in thin slices. It is ideal for adding to a sandwich (we recommend a muffaletta sandwich); served alongside a chicken salad, or on a cheese platter as an appetizer. Although mortadella is easy to find in most grocery store delis, it may not be available where you live or perhaps you don't enjoy the flavor? If you're looking for a mortadella substitute, then keep reading because we have compiled a list of suitable options.

What can I use as a substitute for mortadella?

If you need to replace mortadella then look for mild-tasting cold cuts; your best options are Bologna, Olive Loaf, Thüringer or Galantine. These choices will come closest to mimicking the original meat’s flavor and texture although each will have some differences. At a pinch, you could use Fleischkäse, Landjäger, or Lebanon Bologna. 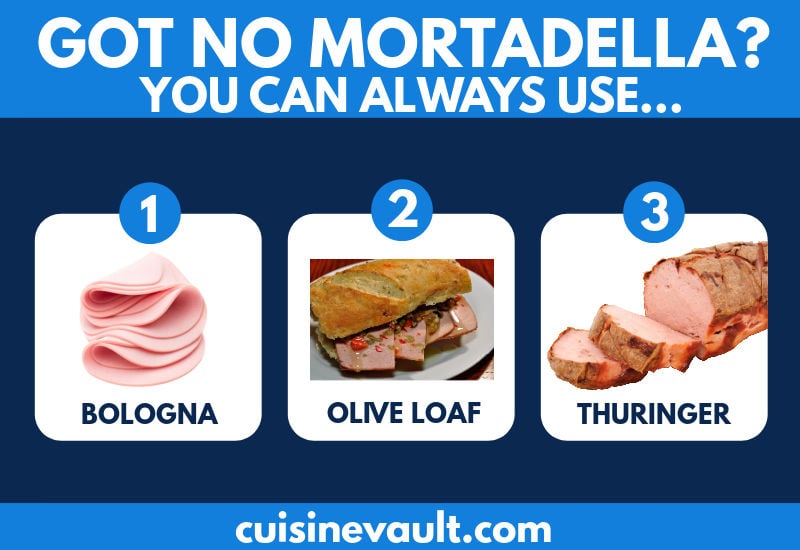 In the United States, bologna is a kind of finely ground pork sausage which derived from mortadella. It has a wide variety of names around the world such as devon in Australia and polony in South Africa. Bologna meat has been emulsified so it is similar to hotdog meat.

Although bologna has a similar texture to mortadella, it doesn't have the buttery chunks of fat which melt in your mouth. Also, bologna's flavor is less complex and lacks the pork flavor and subtle spicy undertone. Some cuts of mortadella will also have pistachio nuts added which you won't ever find in bologna.

Olive loaf is a fine-textured meat that is made from pork and beef. The meat is precooked and is usually sliced thinly and used as cold cuts. Olive loaf has whole pimento-stuffed olives added throughout the meat. As you would expect, this provides a strong olive flavor which gives the meat a unique taste. Some varieties of mortadella also include olives, but this additional ingredient is not so common.

Thüringer (aka Thuringian) is a semi-dry sausage that is made from beef combined with salt, spices, curing ingredients, and a starter culture. It is smoked and could best be described as a cross between summer sausage and mortadella.

In the United States, Thüringer cervelat is commonly sliced and served with crackers, cheese, and mustard. When compared to mortadella, you will find that it offers a spicier flavor with a smokier undertone.

Galantine originated in France and is a combination of meat, fish, or poultry that is stuffed and cooked. The meat is formed into a roll and then cooled with a stock, resulting in a jellied loaf. Galantine commonly has other ingredients such as pistachio nuts or olives added for extra flavor and texture. This results in a chunkier style of meat than what you would get from mortadella. It also tends to have a more complex flavor.

Fleischkäse or Leberkäse is popular in Germany, Austria, Switzerland, and can also be found in other parts of the world like the United States. This loaf is made by finely grinding corned beef, pork, and bacon and then cooking until the crust is crunchy and brown. Fleischkäse is similar to bologna and if you are looking for a mortadella substitute then this meat could be used in a pinch.

Landjäger is a European semi-dried sausage that is commonly used as snacking meat. The meat was traditionally eaten by soldiers as it keeps without the need for refrigeration. It is made with pork, beef, and a range of spices then smoked and air-cured. Although Landjäger is more closely compared to pepperoni, it can be used in similar recipes as you would use mortadella.

Lebanon bologna is a smoked and cured semi-dry sausage that is also fermented during production. This sausage is made from beef and is often used in the same way as mortadella. Lebanon Bologna is similar to salami and has a darker color than mortadella. The other distinct difference is that Lebanon Bologna has a unique tangy flavor that results from the fermentation process.

If you're on a plant-based diet then why not make a vegan version of mortadella? Here's how you can make a meat-free sausage at home.

Recommended reading:
What can I use to replace guanciale?
What is the best replacement for nduja?
What are the best Melba toast substitutes? 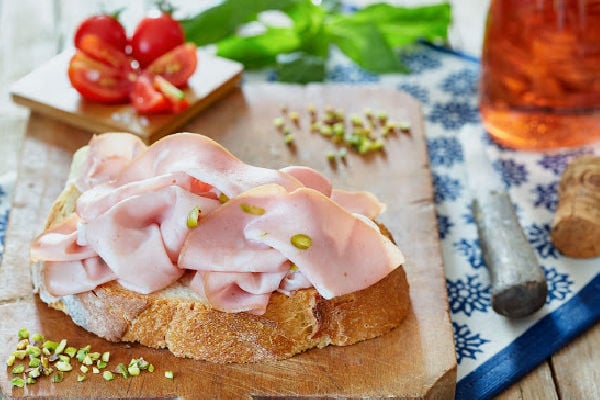 Mortadella is a delicious mild sausage that is commonly sold pre-sliced from the delicatessen. If you're looking for a good substitute for mortadella then try bologna, olive loaf, or Thüringer. They are all excellent options and are usually easy to find in the United States. Naturally, each of these deli meats has its own set of unique ingredients so their flavor and texture will be different. But they'll all do a great job added to your next sandwich or served up as an antipasto appetizer.

With so many choices on offer, what is your favorite lunch meat? Please let us know in the comments below.