Some plants just look so strange that it is hard to believe that they came into being naturally. Especially when it comes to fruits and vegetables that are healthy and delicious, it is an obvious assumption that they are designed for our consumption. 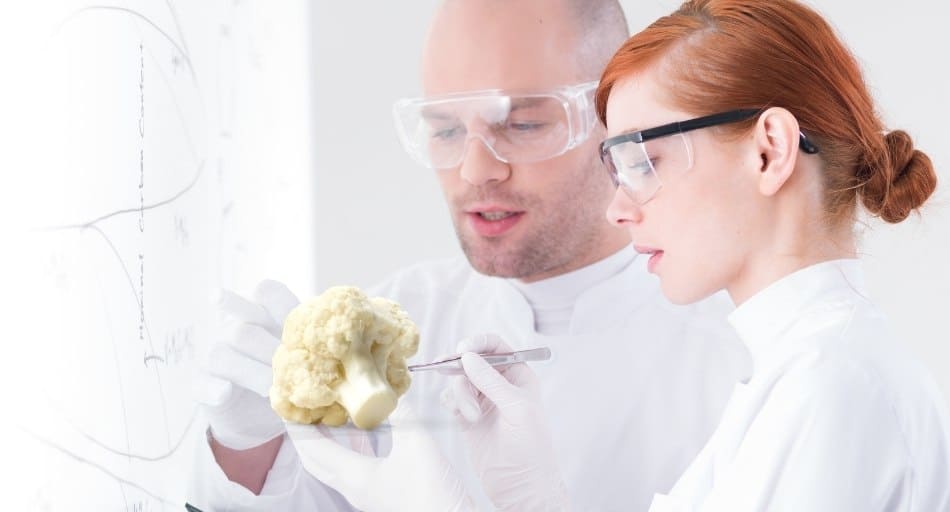 Cauliflower, with its outstanding colors- most often it is white, but it also comes in orange, green, and purple - and shape, is an understandable candidate for this kind of questioning. Is cauliflower man-made?

Yes, it is! Cauliflower belongs to the group of vegetables - together with, for example, kohlrabi, broccoli, and Brussels sprouts - that have branched off from wild mustard and belong to the Brassica oleracea family, which originated on the island of Cyprus. Humans began to make cauliflower back in ancient Rome. Farmers selected mustard plants with especially big flowers and mated them together, which resulted in cauliflower and broccoli.

Cauliflower's first mention in writing is found in the first century in the Natural History, a book of Pliny the Elder, a Roman naturalist and philosopher.

It took until the 12th and 13th centuries until this vegetable was introduced to Western Europe, and it only became a regular food staple in the 16th century.

READ NEXT: Is Cauliflower Acidic? (Good for GERD?)

Is cauliflower good for you?

Cauliflower is excellent for you and your health. It contains many vital nutrients, vitamins, antioxidants, and fiber. It is high in choline, an essential nutrient that has several important functions in the body.

Cauliflower contains 45 mg of choline per cup and, together with broccoli, is one of the best plant-based nutrient sources.

Cauliflowers are extremely healthy vegetables. It is low in calories and high in vitamins - it contains a bit of almost every vitamin that the human body needs. Like other vegetables from the Brassica oleracea family, cauliflower is also high in antioxidants and helps to boost your immune system.

What is better for you: cauliflower or broccoli?

Broccoli and cauliflower belong to the same family of plants and are therefore very similar. There are a few nutritional differences, though, but whether you prefer one of them over the other depends on what you need and which aspect of your health you are focusing on.

Broccoli has a higher vitamin content, especially when it comes to vitamin K and C. It also provides more fiber and minerals.

On the other hand, an advantage of cauliflower is its versatility, making it so popular in people trying to consume fewer carbohydrates. Cauliflower can replace rice, can be used for making pizza crust, and even the "cheese" sauce in a healthy mac and cheese variety.

Since both vegetables have similar textures and a mild taste, they can be replaced with each other in almost any recipe and thus make it very easy to be integrated into any diet.

In general, there are hundreds of varieties of cauliflower that are being sold, but all of them stem from four big groups:

The Italian cauliflower is the ancestral form from which all other varieties branched off. At first, these original types were brought to France, Germany, England, and the Netherlands, where other varieties were developed.

The Northern European Annuals were developed in Germany and are harvested in summer or fall.

The Northwest European biennial was developed in 19th century France and can be harvested in spring or winter. These different types, therefore, guarantee a year-long supply of cauliflower!

Lastly, the Indian cauliflower is different from the European varieties in that it is able to withstand hot and humid climates with a lot of rainfall.

It is also interesting to look at the origins of differently colored cauliflower. Orange cauliflower is a genetic mutation that originated in Canada in the 1970s. This mutation makes it possible for the plant to hold more beta carotene, the same pigment that gives carrots their distinctive color. It contains about 25% more vitamin A than white cauliflower.

Purple cauliflower gets its color from the antioxidant anthocyanin, which is also present in red cabbage and red wine. Green cauliflower was developed in the early 1990s and is sometimes called broccoflower because it is a crossover between broccoli and cauliflower. It tastes milder than either of these vegetables.

Colored cauliflowers can usually be substituted in recipes for white cauliflowers and vice versa. Still, some recipes are designed in a way to preserve the unusual colors best.

Is cauliflower a carb?

Cauliflower does contain carbs, but it is a low-carb veggie containing only 5 grams per cup, which is much lower than a cup of rice that clocks out at 45 grams. That is nine times the amount of cauliflower! This veggie is great if you're on a low-carb diet.

Cauliflower is classified as a non-starchy vegetable that is very low in calories and carbohydrates, and it's often recommended as part of diabetic and low-carb diets as the number of carbs is much lower compared to other starchy vegetables like corn, for example.