Mexican food is as diverse as it is delicious. In the kitchen, most of us don’t experiment past popular dishes like tacos and fajitas.

Have you considered cooking huaraches or sopes?

They are both street snacks popular in Mexico, South America, and some parts of the United States. To make either option, a flatbread made from Masa Harina is topped with delicious ingredients like: lettuce, shredded cheese, onions, meat, pinto beans, and salsa sauce or queso.

Sopes and huaraches often get mixed up by people who aren’t familiar with them. Keep reading to get our ultimate comparison guide that reveals all the answers.

What’s the difference between a huarache and sope?

While huaraches and sopes are both crunchy cornbread snacks, huaraches are large, sandal-shaped dishes that are substantial enough for the main meal. Sopes are round and much smaller, better suited to a between-meal snack. They’re also thicker, making them more suitable for holding together when moist foods like salsa are added.

Did you know? Both snacks are related to the taco and are classified as antojitos; “little cravings” or small snacks commonly sold by street vendors.

Sopes are made with dough using flour and occasionally eggs for extra color and flavor. Recipes for huaraches may also include kneading black beans into the dough. 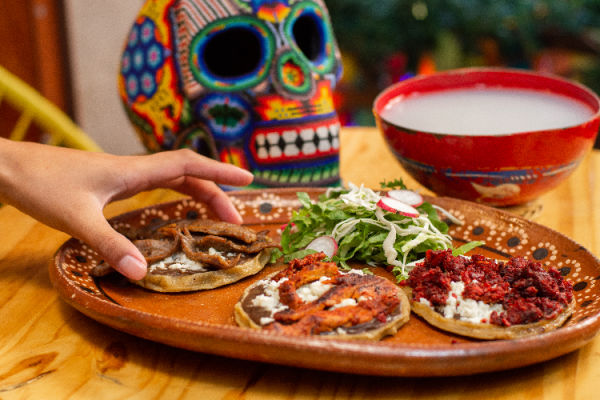 Once sope dough is soft and pliable, it gets fashioned into the shape of a dish, with a lip around the outside to help keep the toppings in place. This differs from huaraches which are formed into a Mexican sandal shape.

Both dough bases are much thicker than a regular tortilla.

There are few hard-and-fast rules when it comes to suitable topping ingredients for each dish. They tend to use the same ingredients that are popular added to other street food like burritos and tacos.

Unlike sopes, you’ll find that cactus paddles are more popular for adding to huaraches, along with cilantro and other salad ingredients. Sopes are often paired with chicken (Sopes de Pollo) or meats like ground beef, chorizo, or carnitas.

Both foods are made by kneading water, Masa Harina, and salt until a dough forms. After flattening, it gets fried on the comal (griddle) for a couple of minutes on each side – just enough to dry the outside.

If you’re making them at home, the dough can be made in advance and stored frozen for one month or up to three days refrigerated. The fillings should be stored separately and added during serving.

A huarache can range from 2-3 times the size of a sope. It makes a substantial meal for breakfast, lunch, or dinner and often comes with sides like guacamole and refried beans.

Sopes are a more popular in-between meal snack. They make an excellent late-night energy booster for anyone having a night out on the town. Of course, it can be transformed into a main meal with extras like rice and salad. 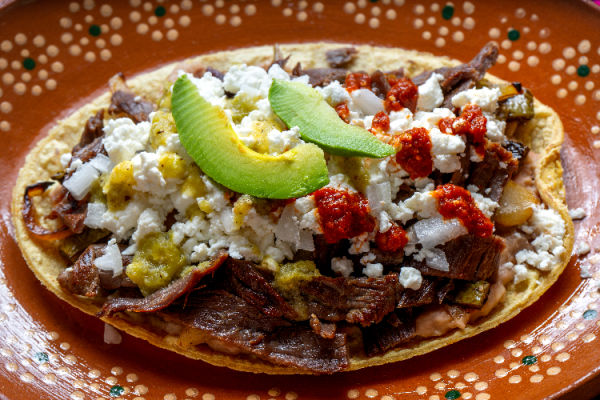 Interesting article: How do I reheat tamales the right way?

What’s the difference between a tlacoyo and a huarache?

The tlacoyos and huarache are similar Mexican snacks. However, tlacoyos are usually made using blue corn masa and have a pointy oval shape; huaraches are bigger and have a sandal shape.

What is a tostada?

A tostada is a blanket term used to describe a range of Mexican dishes. They typically are made using a flat or bowl-shaped toasted tortilla as the base, then get topped with a wide range of ingredients.

Are gorditas and sopes made the same way?

Sopes and gorditas are both made using similar recipes that use freshly ground corn (aka maíz nixtamalizado) or Masa.

What are tacos dorados?

Tacos dorados are also known as rolled tacos, taquitos, or flautas. They are a traditional Mexican dish made from small tortillas rolled up with fillings like cheese and pork, chicken, or beef. Once filled, the tortillas are pan-fried, then topped with condiments like sour cream.

Related reading:
What should I use to replace tomatillos in a recipe?
How do migas and chilaquiles compare?
What's the difference between taco and fajita seasoning?

At first glance, the huarache and sope don’t look much different. They both consist of thick, tortilla-like bases made from Masa flour, and are topped with similar delicious fresh ingredients.

The main difference is that huaraches have large, sandal-shaped bases while sopes have smaller, round bases. Sopes also tend to be thicker, making them ideal for holding more wet ingredients.