What’s better than munching into a well-cooked cob of sweet corn? Crunchy, sweet, and salty, all in one mouthful. Although cooking corn isn’t a huge challenge for most, some methods work better than others. We decided to test a range of popular options for cooking corn to discover which works best.

To find a winning cooking method, online research was conducted to create a list. We also reached out to various groups on social media as part of the fact-finding mission. Once the list was complete we bought a stack of corn and began cooking.

Judging was based on flavor, texture, visual appeal, and convenience. In other words, if the corn tasted perfect, but required two hours extra cooking then it would be marked accordingly.

To keep it fair, all methods were tested on the same day to ensure equal freshness.

1. Grilling Without the Husks

If there’s a vegetable that is made for the grill then corn has to be high on the list. Charred, smoky food is always a winner. But what’s the best way to grill it? We often see people grilling in without the husks on, so it had to be tested. 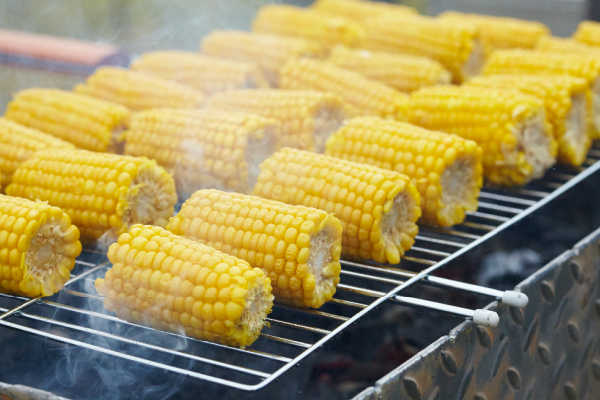 Preheat the grill until it reaches a medium-high heat. While you’re waiting, shuck the cobs. Once the temperature is hot enough, position the corn on the grates and cook for ten minutes. Keep a close eye on them to ensure there is no burning. Frequent turning will help with consistent cooking of the kernels.

Corn kernels do not deal well with excessive direct heat. The end result was corn that looked shriveled and burnt. A quick taste test proved our fears correct – dry corn which lacked that crispy bite. Instead of juice bursting from each kernel, they were dry and had little to offer.

The additional step of pre-heating the grill seemed like a lot of extra time for cooking corn. If you’re using it to cook other food, then tossing a few ears on as well isn’t a bad idea. But it’s too much effort for sub-standard corn on its own.

A true comparison of cooking methods isn’t complete without pulling out the Crockpot, Instant Pot, or whatever appliance you use to pressure cook food. Although the total time is 15 minutes, keep in mind that 10 minutes of that is the pressurizing; the cooking only takes 5 minutes. 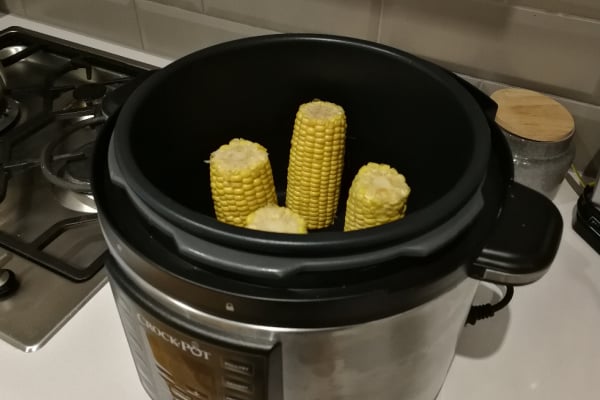 Remove the corn husks and discard, then slice off the ends of the cob and chop them in half. Position the halved cobs in the pot vertically and cook for 5 minutes on high pressure. Once cooked, release the pressure and transfer your food to a plate.

Pressure-cooked corn looked and tasted similar to the boiled option. The kernels looked a vibrant yellow and hadn’t withered or turned mushy during cooking. One bite confirmed that the vegetable had retained its delicious moisture content.

Although the cooking time is just 5 minutes, when you allow for the pot to build pressure, it isn’t much of a time-saver. If time is your enemy then the microwave is easier, and yields similar results, albeit a little drier.

If adding a little fat to your diet isn’t a problem, a luxurious butter bath maybe your ideal method for cooking corn. The French have known for centuries that fat is a great way to cook food, and using it to enhance the boiling technique makes sense. 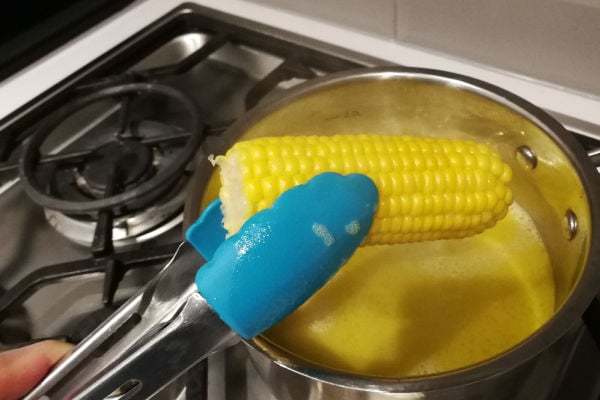 Add roughly four cups of water and a pinch of salt to a pot. Bring the water to a boil, then add an entire stick of salted butter. That’s right, all of it! Add the corn carefully and allow them to simmer until perfectly tender. There is no need to watch over the pot, it will happily cook unattended.

Our corn came out of the pot plump and tender with no signs of mushiness. The texture was a lot like what you’d get from regular boiling. However, the kernels had a glossy looking sheen that glistened, crying out to be eaten. The consistent coating of butter provided an amazing buttery mouthfeel that was extremely “moreish”.

This is the sort of technique you might use to butter up the inlaws (excuse the pun). You wouldn’t use this for weeknight cooking; first, it’s not overly healthy, and second, butter costs a fortune these days. The cost outweighs the benefit in our opinion, but the corn was tasty.

The concept is pretty basic. Wrap each shucked corn cob in aluminum foil to help protect it from direct heat. The uncovered approach didn’t yield encouraging results, so how would this option go? 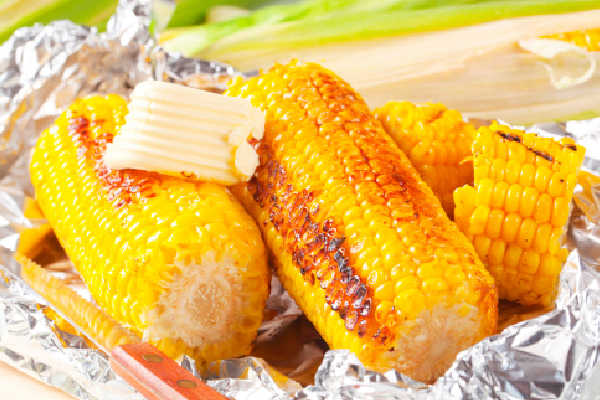 Remove the husks and wrap in aluminum foil, ensuring none of your precious kernels are left exposed. Failure to do this will result in browning around the uncovered area. You can add a knob of butter inside each package for enhanced flavor and moisture.

Cook on the grill for 15 minutes or until cooked through.

If you enjoy bright looking corn that is tender and snappy to the bite, then this is a fantastic option. But for anyone that loves smoky, charred flavor that only a grill can provide, you may want to keep reading. The foil acts as a protective barrier, repelling the smoke. This results in corn that is cooked well but doesn’t give an added pop of barbecue flavor.

The worldwide web is littered with glowing reviews for cooking corn in a microwave. It’s certainly quick and easy, so it had to be included on this page. We tried baking potatoes and it didn’t go so well for the microwave so confidence levels weren’t high. But who can resist the ease and speed of zapping food and serving it up within minutes? 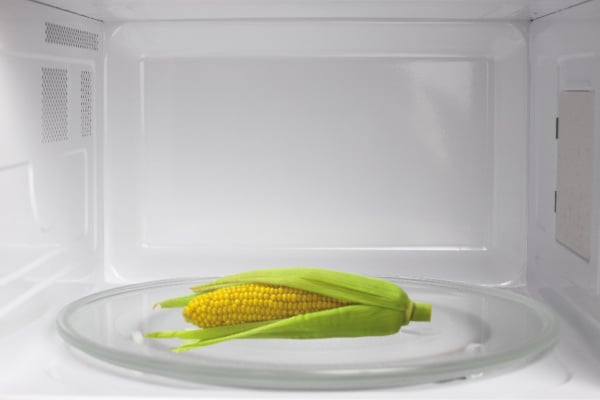 Place a cob in the microwave with the husks still intact and heat for three minutes on high. Remove corn using an oven mitt to avoid burns. The easy way to rid yourself of the husk is to use a sharp knife to slice off the top end of the cob. Next, stick a fork into the end so that it is held securely. Hold the end with the silk and pull all the husks off with one quick tug.

As the husks were removed, neat rows of kernels were revealed that appeared to have held their shape nicely. They tasted delicious, firm, and full of flavor.

Other reviews have mentioned the kernels tend to shrink and dry, but they had removed the husks and covered in something like damp paper towels. This could have been the reason they failed?

The simplicity of cooking was a huge bonus and for time-short home cooks, this option is worth considering.

Boiling is one of the simpler methods on this list, although not as fast as microwaving. It sometimes gets a bad rap for producing mushy, watery food; but get the cooking time right and it doesn’t have to be that way. 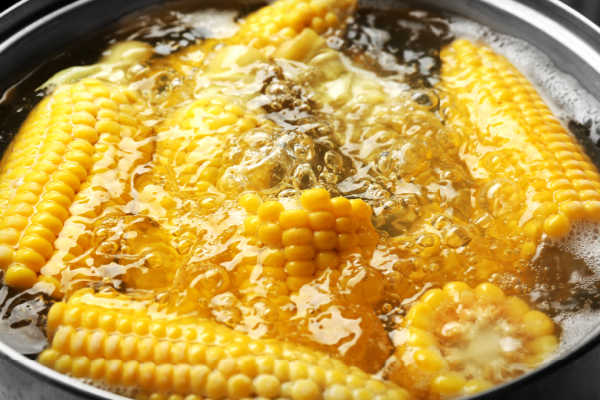 Half fill a pot with salted water and bring to boil. Carefully add the peeled cobs to the pot and cook for 5-7 minutes, before removing with tongs.

Boiling corn is a simple, no-fail option that produces juicy kernels with plenty of flavor. They maintained their color nicely, looking vibrant and perfect for livening up any dinner.

Steaming food retains more of the nutritional goodness compared to boiling. It made sense that we include this method on this list for all our health conscious readers. 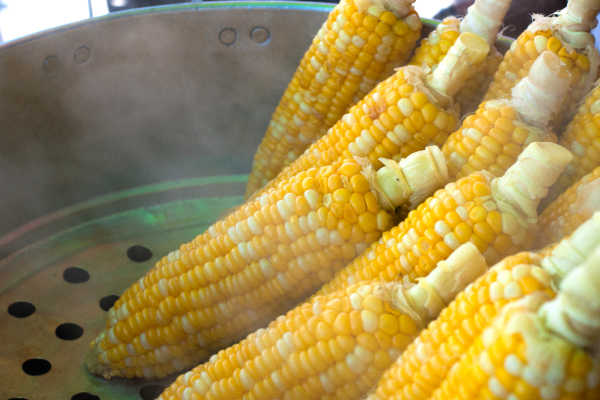 Start by husking the corn and trimming off any silk. If you’re short on space, cut the cobs in half. Add about 2” of water to a pot and then insert a steamer rack. Check that the water doesn’t reach the bottom of the rack. Cover the pot and heat until boiling, then add the corn and replace the lid. Cook for 4-5 minutes before transferring to a plate and seasoning.

You’ll get a similar result from steaming as you get from boiling. If you are craving the extra vitamins and minerals then steam them, otherwise, boiling will do the same job.

When it comes to corn, grilling and boiling are the go-to methods for many home cooks. But some profess that an oven is also a good option. Practically everyone has an oven so it would be remiss of us to not include this technique in our testing. 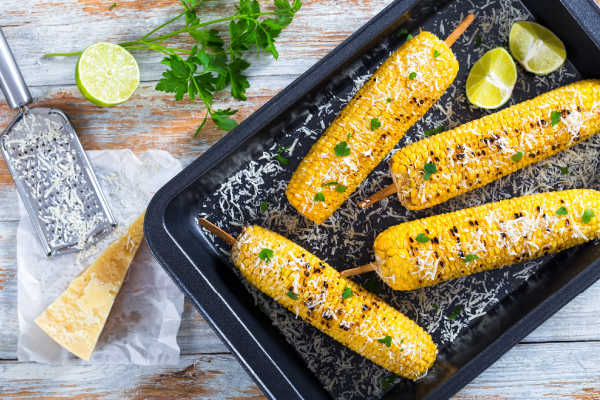 Preheat the oven to 400°F, then shuck the corn and remove all those pesky strands of silk. Smear each ear of corn with soft butter and then add to a roasting pan lined with foil. Cook for 35-40 minutes, flipping the ears halfway through. When the corn is almost done, switch the oven to broil and ensure the oven rack is on the top shelf. Broil for a few minutes until charred nicely.

The corn was cooked perfectly and maintained its shape without shriveling or losing juiciness. The broil added a flavorsome char which attempted to mimic the barbecue effect, without the smokiness. A sprinkle of smoked paprika would have been the pièce de résistance, and something we’ll do next time.

The time factor has to be mentioned here. It was slow and probably not ideal for those in a hurry. For a lazy Sunday afternoon lunch, this method should be considered, especially if you don’t own a grill.

If you love street food or have visited outdoor festivals in the United States then you may be familiar with how corn turns out using this method. It is a popular option so we had to give it a test run. 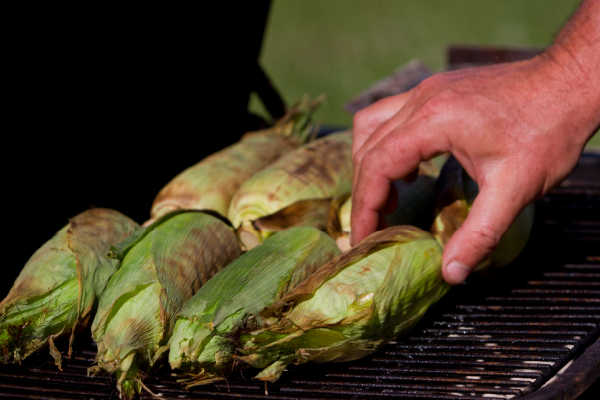 Preheat the grill until it reaches a medium-high temperature. Pluck off the unwanted silks as they’ll just burn if they stay on. Place the corn onto the grill and cook for 15 minutes keeping a watchful eye on them. They’ll need to be turned often to stop overcooking one spot.

Although the husks turn black, and it looks like the corn is a write-off, once the outer protection is peeled back, delicious-looking corn is revealed. The corn looks bright and fresh like it has been boiled. But the flavor is noticeably better. Sweet kernels are balanced by a smoky, salty undertone. If you have a grill and the weather isn’t threatening, we recommend this as the best option.

There are many options when it comes to cooking corn. Although none of the methods we tested were overly bad, we’d recommend steering clear from grilling without any protection for the corn. Roasting, boiling and steaming all produced great corn which we are confident anyone would enjoy.

For many, cooking is as much about simplicity and speed as it is about the taste. With that in mind, the microwave method was an excellent choice to get the job done fast. The perfect balance of quality corn and fast cooking.

For the flavor-obsessed, grilling the ears in their husks provided the best result. The combination of tender, juicy kernels packed with smoky flavor is unbeatable.

Do you have another way to cook corn that we didn’t cover here? Let us know in the comments below and we’ll test it out.