Baked potatoes have to be one of life's great pleasures. Think of this vegetable as a blank canvas for adding whatever ingredients your heart desires. Spicy, creamy, cheesy, and meaty flavors - they're all delicious slumped on top of a baked potato.

Spuds are also enjoyable eaten as a side without any added extras. For the best example, we can think of, check out our duck fat roasted potato recipe.

An exquisite baked potato must be cooked well. If cooked unevenly or the insides are dry, then you'll be disappointed. So, what is the best method for baking potatoes? We decided to test seven different cooking options to see which worked best. Keep reading to discover the results.

Learn how to cook corn perfectly every time. We tested 9 methods to see which was best.

This list goes from best to worst. As there was no seasoning used in this experiment, we scored each potato on its texture. In other words, which option provided a lovely soft, moist inside with a delicious crispy skin. 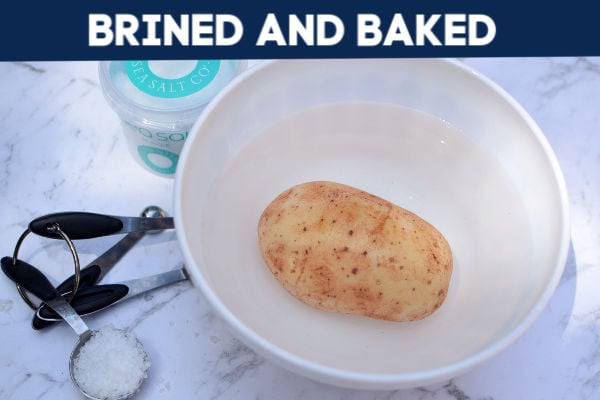 We first discovered this method here. The idea is to dissolve two tablespoons of salt into a half cup of water. Then dunk each potato into the brine, allowing all the skin to become wet. Finally, place them on a wire rack into a hot 450°F oven for 45 minutes. Once they're almost cooked, remove the potatoes and brush with olive oil before returning to the heat for another 15 minutes.

The final potato was one of the best we've ever had the pleasure of eating. Soft and fluffy on the inside with a crispy skin, almost like a potato chip. This method provided the best result throughout our day of testing.

There was a little more work in this cooking method. First, the brining and then oiling towards the end of the cook. It wasn't a big deal, though, and it was well worth it. 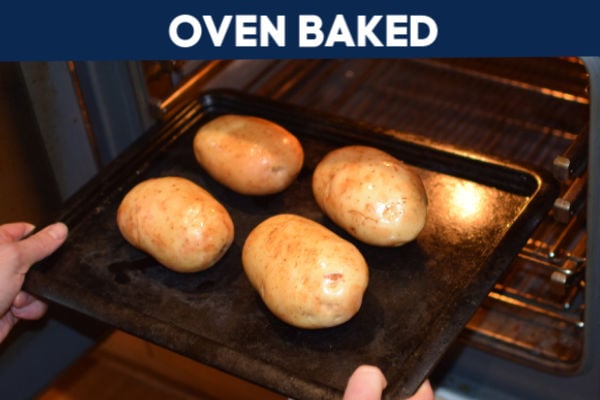 This method didn't need any brining or basting with oil, so it was easier. A moderate oven temperature of 350°F was used. Depending on your oven and the size of the potato, it'll take 60-75 minutes of baking.

Before cooking, remember to coat the potato in olive oil and prick with holes.

The interior was similar to the brine option above - delicious, evenly cooked fluffy texture. The skin wasn't as flavorsome and didn't have the crispy element to it. However, it was still an excellent potato and a good option if you want a simple recipe with no fuss.

Extra tip: To cook a potato with increased moisture, cover each vegetable in foil first. Remove the covering 20 minutes before the end of cooking to crisp up the skins. 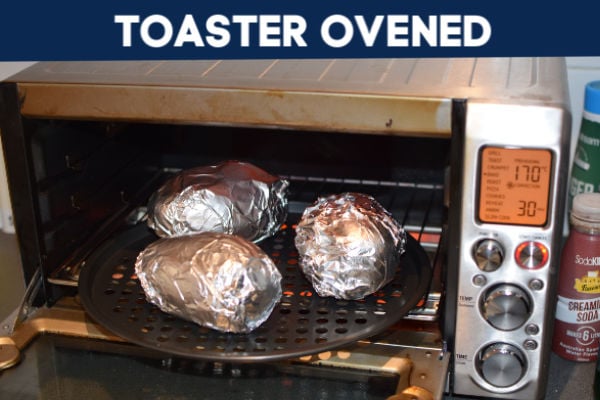 We used the same steps as those used for oven-baked potatoes (see method 2). The idea was to test whether a traditional oven or a toaster oven would produce the best meal. If you're interested in learning more about toaster ovens, be sure to check out this review of the Breville Smart Oven Pro.

Surprisingly, there was no difference between each oven. It seems that bigger isn't always better in the kitchen. 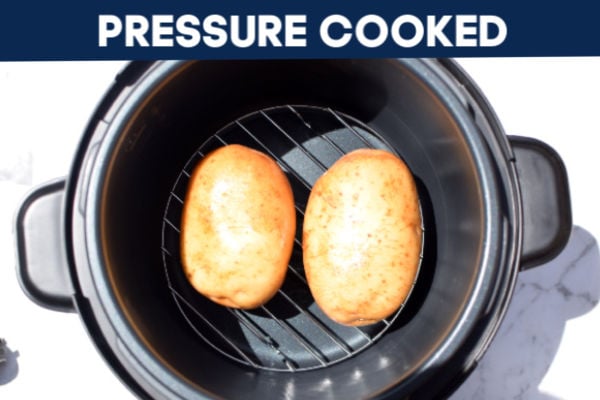 This method was our first attempt at pressure cooking potatoes, so we were unsure what to expect.

The steps were simple: add one cup of cold water to the bottom of the pot then pop in the steel rack. Place the pricked potatoes onto the rack with no coating of oil, then close the lid. We used a Crockpot and set it to pressure cook for 20 minutes. 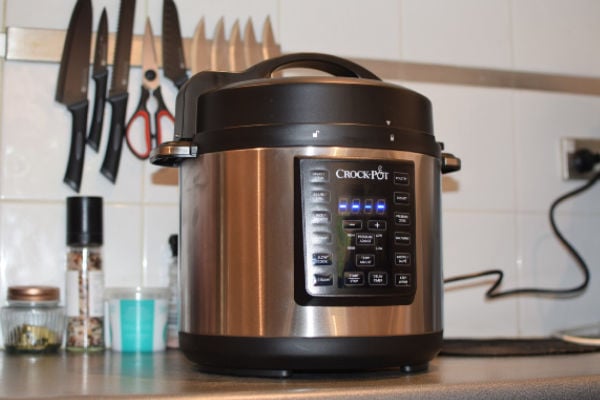 Our brand new Crockpot ready to be tested.

With this cooking option, you have no option but to set and forget as the lid can't be removed during cooking. Of all the choices on this page, pressure cooking has to be the easiest.

The Crockpot created a baked potato that had a superior texture on the inside. The potato was creamy and moist – a pleasure to eat. On the flip side, the skin wasn't anything to get excited over. It lacked that crisp texture that you'd expect from the oven-baked version.

Pressure cooking is the best cooking method for anyone short on time. The preparation was simple, and cook time was much quicker than any other option. Just don't expect too much from the skin. 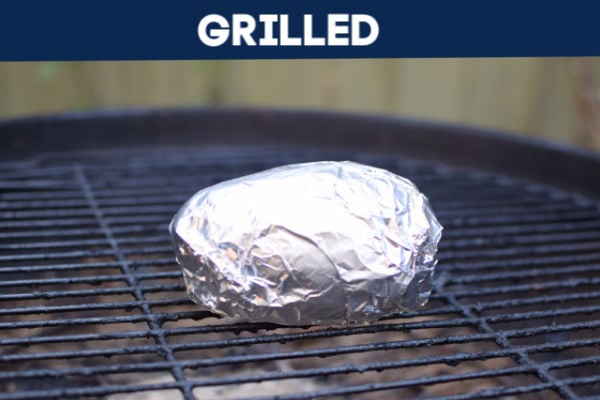 It seems a barbeque is capable of cooking almost anything, including baking potatoes. We coated foil in oil and sprinkled it with salt. Each vegetable was individually wrapped in the foil, pricked with a fork several times, then tossed onto the heat.

Cooking time will vary depending on the type of grill you use. One hour is an approximate guide. At the 45 minute mark check to see how they're progressing.

These baked potatoes weren't the best. The hope was for a nice smokey BBQ flavor, but it seems that the foil may have acted as a shield? The taste was no different than other cooking methods; but, the skin wasn't pleasant, and the flesh lost a lot of moisture. Of all the cooking options on this page, grilling resulted in the driest final product.

If you're already cooking meat on the grill, it won't hurt to toss in some potatoes. But don't start up the grill solely for this purpose. 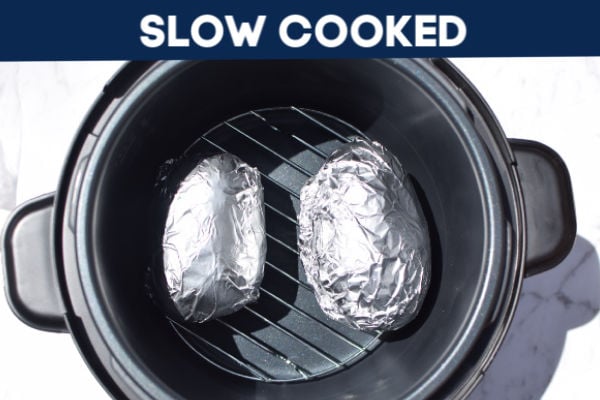 If a slow cooker can transform a tough piece of meat into a tender delicacy, what can it do for jacket potatoes? For the sake of research, we decided to find out. The steps were straightforward: wrap each spud individually in foil then place them in the pot. Cook on the high setting for four hours.

The potato was undoubtedly moist and creamy. However, the skin was soft and limp. After such a long wait, the result didn't seem worth the time or the increased power bill.

Our suggestion: Save your slow cooker for meat, casseroles, and any other dishes that it excels at cooking. 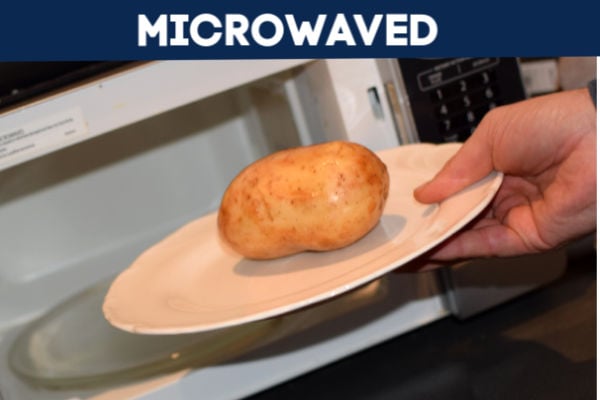 Place a pricked potato on a plate and place it in the microwave. Heat on high for seven minutes, then flip it and cook for another seven minutes. Our potato was quite large, so you'd want to reduce the cooking time for a small one.

Nuking the potato cooked the inside okay although it wasn't evenly done, and the texture was a little dry. The skin lacked any crispiness, and it didn't look as appealing visually as some of the other potatoes did.

If you're in a big hurry, then a microwave will get the job done every time. Just don't expect anything too fancy. Microwaving is your mid-week go-to option. It's best avoided if you're looking to impress guests on the weekend.

To keep our testing as consistent as possible, we used the same potato variety for every test. If you're looking for the best potato to bake, then a high starch variety is what you need. Some suitable choices include Russet, Maris Piper, Yukon Gold, and Vitelotte.

Each potato was washed under cold water by hand then dried thoroughly with a tea towel. No seasoning or additional ingredients were used except for a little olive oil, which we splashed over before cooking.

Each potato was pricked all over with a fork to prevent them from bursting open.

If your main goal is to make perfect tasting baked potatoes, then the brine and bake method is our recommendation. The steps aren't overly time-consuming, and you get a tasty combination of fluffy potato combined with a crispy, flavorsome skin.

If time isn't on your side, the pressure cooker method provided an enjoyable, creamy potato. You won't get the same crispy skin, but for some, that won't be a deal-breaker.

Options to avoid were slow cooking and grilling. The microwave wasn't ideal either; but, its speed still makes it a choice worth your consideration.

What is your favorite method of baking potatoes? Let us know in the comments below.