Is carp good to eat? This widely-known fish has a complex reputation, especially in the United States. Some say it has a muddy taste, while others think the meat is unsafe, leaving many wondering, “Can you eat carp at all?” 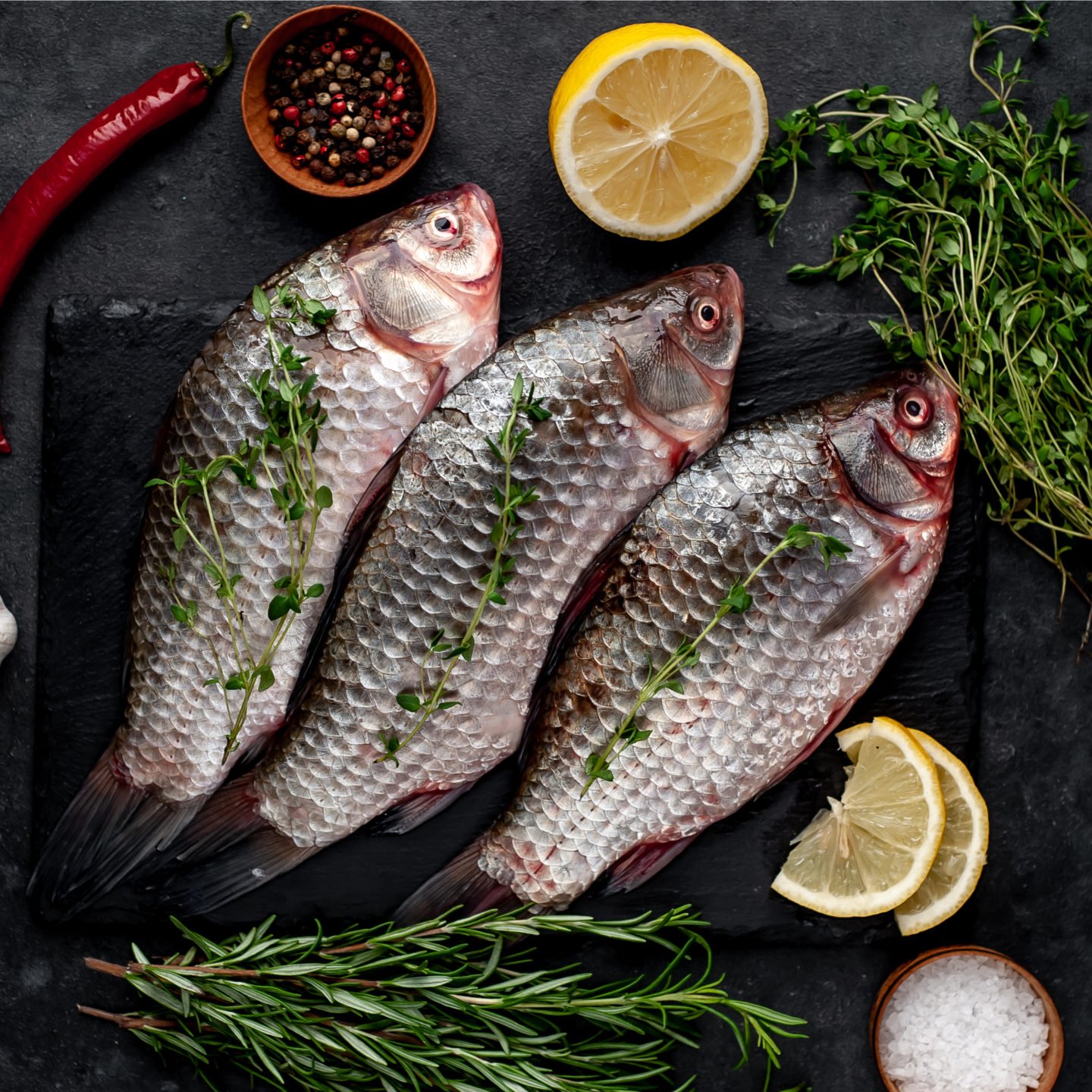 The fact is, you can eat carp, and many people across the world do. When caught and prepared correctly, it has a flaky texture and flavorful taste that’s great fried, baked, or grilled. Learn more about carp’s reputation, flavor, and preparation here.

The common carp fish has a reputation for having a strong, muddy flavor, but how much of that is the fish itself, and how much is caused by other factors?

For those wondering why do people eat carp, the truth is carp meat that has been fished from the right water and prepared and cooked the right way is light, flaky, and without a muddy flavor.

For all freshwater fish, the flavor depends entirely on the environment it is taken from. This is especially true for carp since they rely mainly on vegetation for food. This makes them more susceptible to water pollution, which will directly impact the flavor of their meat.

When taken from a clean environment, carp has a flavor similar to salmon. It is on the stronger side and is a bit oilier but should never be muddy-tasting.

Asian carp has a long reputation as a food source worldwide and was favored by Henry VIII and other rulers throughout Europe and Asia. They were imported to the United States in 1870 and quickly became a sought-after dinner menu item among the rich.

These facts might sound surprising to people living in the United States now, who largely see Asian carp as a trash fish. Exactly how did it earn its less than sterling reputation? As it turns out, there is a wide variety of reasons.

As Asian carp gained popularity at the end of the 19th century, the supply of carp increased to meet demand. As a result, it became less exclusive and more affordable and found its place on the dinner tables of both rich and poor alike.

Ultimately, this would lead to the carp’s downfall. Once the wealthy and fashionable discovered it was no longer a hot commodity, interest plummeted, and it became a poor person’s fish.

Raising Carp is a Science

As mentioned above, the best carp comes from fresh and clean water that’s free of pollution. Before the fish found its way to America in the early days, most were raised in clean waters to improve the flavor as much as possible.

However, all this changed once the fish gained popularity. To meet rising demand, many fish farmers trying to make a quick buck raised their carp in less than ideal conditions. Most grew in muddy, stagnant ponds, resulting in an undesirable flavor.

In the United States, the fish that get the most attention are often those that are fished for sport. Largemouth bass, salmon, and walleye are all commonly sought by experienced anglers, giving them a reputation for desirability. While carp are sought by fishermen in other parts of the world, this isn’t the case in the US.

Because fish were imported en masse to the US in the 19th century, they have become one of the world’s leading invasive species. As a result, many see the fish with disdain, hurting its popularity.

Is it Safe to Eat Carp?

Carp is definitely safe to eat, as long as it is properly cooked so that its flesh is flakey and white. Like many freshwater fish, it is not the ideal choice to be eaten raw, as in sushi or sashimi.

When cooked, carp offers several health benefits. It is high in omega-3 fatty acids, helps lower blood pressure, has an anti-inflammatory effect that boosts your immune system, and is an excellent source of vitamin B12, phosphorus, and protein. Lastly, it is easy to digest.

How to Prepare Carp

The best tasting carp are those you fish yourself from clean, natural water. However, whether you’re catching them yourself or picking up fillets at the grocery store, you can use this guide to make sure you cook them right.

If you have caught your own or bought a whole carp, the first step will be to scale it. Carp have thick, wide scales which are tough and not fit for eating.

To scale your carp, hold it by the tail and run your knife perpendicular along the surface of the fish. The scales should come flying off one after another. Make sure they are all gone before filleting your fish.

Alternatively, you can skin your carp, which is easier though you may lose some of the flavor imparted to the meat from the fat located along the skin. To skin your carp, first fillet your fish and then cut into the meat, running the knife alongside the inner edge of the skin, down the whole length of the fish.

After removing the scales, you’ll want to fillet your carp and make sure it is cut into portion-sized pieces. Often, the fish will be available in the supermarket already filleted. To fillet, simply cut from the top of the fish to the bottom, dividing the large flank into slices 2 to 3 inches thick.

Carp can be delicious baked, fried, or grilled, and there are plenty of recipes that can help you make a wonderful meal. However, one of the simplest ways to cook carp is to sear it in a pan.

Begin by heating a medium-sized pan over medium-high heat and drizzle in two tablespoons of olive oil. While your pan heats, coat both sides of your carp fillet with salt and pepper, rubbing the seasoning in and ensuring an even distribution.

When your pan is hot, gently lay the fish skin side down into the pan. Then, press the back of your spatula down into the fish for ten seconds to ensure it lays flat.

After 3 to 4 minutes, flip your fish and cook for another 2 to 3 minutes more. By the end, your carp should be moist and flaky, with a crisp sear on the exterior.

Can you eat carp that you caught yourself?

Fresh-caught carp is one of the best ways to enjoy the fish. Farm-raised carp isn’t always treated to the best living conditions, often giving the meat its infamous muddy flavor. It should have a wonderful flavor and delicate texture as long as you catch it in clean, unpolluted water.

Is it illegal to eat carp in the UK?

While fresh-caught carp can often be delicious, there are some places where it’s illegal to eat the carp you catch. The UK is one of these, so if you want to cook one for yourself, you’ll have to buy it from the grocery store.

Do carp hurt the environment?

Carp are bottom-feeders, which means they eat insects and insect larvae from the bottom of ponds and rivers. While this practice isn’t necessarily harmful, it can disrupt natural habitats as the fish uproot plants and reduce water quality. Combined with the overabundance of carp in many habitats, it can lead to a real problem for other species.

What traditional recipes use carp?

Carp is a common ingredient in many traditional recipes, lending its high-fat content and fishy flavor to soups, stews, and other dishes. One of the most widely recognized is the traditional Jewish delicacy gefilte fish, which is made of ground carp and other fish. Several Sichuan stir-fry dishes also include crispy fried carp.

Of course, this is only the tip of the iceberg. If you look hard enough, you’ll find that many European, Asian, and American cultures use carp regularly.