There are lots of claims made by the fitness industry to convince consumers to part with their hard earned cash. Right now, beta alanine is being widely promoted as the hottest supplement around for bodybuilding and other athletic performance.

There are many websites that provide a whole lot of hype but only varying degrees of accuracy of information about beta alanine. Pretty much all of these websites are selling the product… and so obviously have a vested interest in convincing the general public that this amino acid needs to be bought…. Now!

Why is there currently so much interest in beta alanine?

The first human study on the effects of beta alanine was published in 2006 [1]. Since then, its use and formulation has expanded into nearly every exercise formula on the market.

In fact, over the past ten years, beta-alanine has grown to become one of the most popular sports nutrition ingredients on the market. According to Wise Guy Reports, the global beta-alanine market was worth 58 million dollars in 2015 and is expected to grow at a rate of 4.65% from 2016 to 2020 [2].

There have been many studies to assess the effects of beta alanine supplementation and the results are certainly interesting. This article will look in depth at the evidence, claims and effects of this interesting little molecule.

What Actually Is Beta Alanine?

Beta-alanine is a non-proteogenic amino acid that is made by the liver [1].

Hold up… Wondering what that actually means? Well, amino acids are the building blocks of proteins. The amino acids the body can’t create are known as essential amino acids and these must be obtained through food (basically, protein rich foods like meat, chicken, pork and seafood).

Non-proteogenic or non-essential amino acids are amino acids that can be made by the body, so they don’t have to be provided by food. Us humans can (and do) also acquire beta-alanine through the consumption of protein rich foods.

What is the Role of Beta Alanine?

Beta alanine alone isn’t particularly interesting by itself. However, it is important as a substrate (building block) for a molecule called carnosine, which plays a vital role in our muscles as an intracellular proton buffer (regulating acidity levels in the cell) [3].

In muscle, where its concentration is highest, carnosine makes an important contribution to the maintenance of intracellular pH (acidity), which is vital for normal muscle function during intense exercise [4].

During high intensity exercise, muscles contract repeatedly and produce protons (hydrogen ions or H+) when lactic acid is broken down, making the muscles more acidic. This interferes with many processes in muscle cells and results in muscle fatigue and reduced performance [5].

Carnosine counteracts this by reducing muscle acidity, thereby increasing the amount of work the muscles can do before they become fatigued [3]. Our cells use beta alanine to form carnosine, by combining it with an essential amino acid, L-histidine.

Importantly, supplementation has also been shown to increase muscle carnosine levels in both trained (ie. athletes) [9] and untrained (ie the rest of us mere mortals) [10].

One of the drawbacks of the research to date evaluating increases in muscle carnosine is that it has largely been performed in young males, but there is also evidence to suggest that beta-alanine supplementation is effective in females and the elderly. 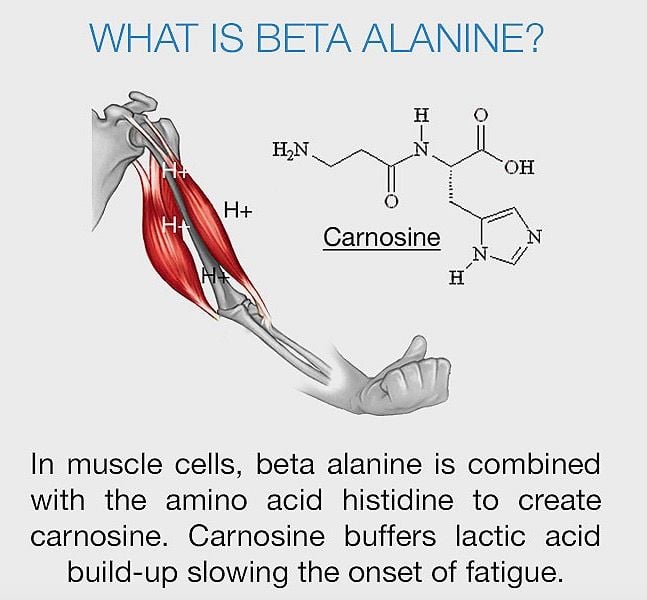 I hear you asking: why not supplement with carnosine directly instead?

Well, when consumed, carnosine doesn’t make its way to your muscles, instead it gets broken down into its constituent parts, beta-alanine and L-histidine8. These are then just re-used to form back into carnosine.

Decades of research has suggested the potential for carnosine to influence other aspects of good health, including antioxidant properties, anti-aging, immune enhancing, and neurotransmitter actions.

However, the majority of these health benefits have been explored in vitro and in animal models (meaning not in real life human cells [1]). Which basically means we can’t draw any clear conclusions about its health effects.

How Much Research Is There On Beta Alanine?

Although relatively new, with the first human study published in 2006, beta-alanine use and formulation has expanded into nearly every workout formula on the market.

Unlike many other health supplement claims, there have been several thorough, good studies published on the claims and effects of beta alanine.

One of the biggest meta-analysis by Trexler et al., (comprehensive search of the research published to date) on beta-alanine supplementation conducted in 2012 looked at fifteen studies which reported the results of 57 measures within 23 exercise tests, using 18 supplementation regimes and a total of 360 participants [1].

What Has The Research Shown?

It has to be said that this research showed a statistically significant but nevertheless minor improvement in endurance (of 2.85%), and this was limited to exercise duration lasting between one and four minutes.

Another well-respected, recent meta-analysis by Hobson et al., concluded that beta-alanine improved exercise capacity in terms of delayed exhaustion, to a greater extent than fixed end-point exercise performance, such as race times or time trial performance.

Beta-alanine supplementation has been consistently shown to increase muscle carnosine concentrations [4],[9] in in a variety of populations, and may therefore improve performance during high-intensity exercise and/or enhance the quality of training in athletes participating in high intensity, short duration strength and power sports, such as Cross-fit or weight lifting10.

The benefit of beta alanine for aerobic exercise lasting beyond 4 minutes is mixed. Some research has such a modest improvement (less than the effect on performance between 1 and 4 minutes) that, nonetheless, could be meaningful in competitive athletics, such as running, cycling, etc [11].

Based on the current literature, that is the sum total of all the research studies to date, supplementation with 4 to 6 g of beta-alanine for at least 2 to 4 weeks has been shown to improve exercise performance and reduces neuromuscular fatigue, particularly in older subjects. Research has shown that doses of 4 to 6 g/day of beta-alanine have been shown to increase muscle carnosine concentrations by up to 64 % after 4 weeks [4], and up to 80 % after 10 weeks [9]. 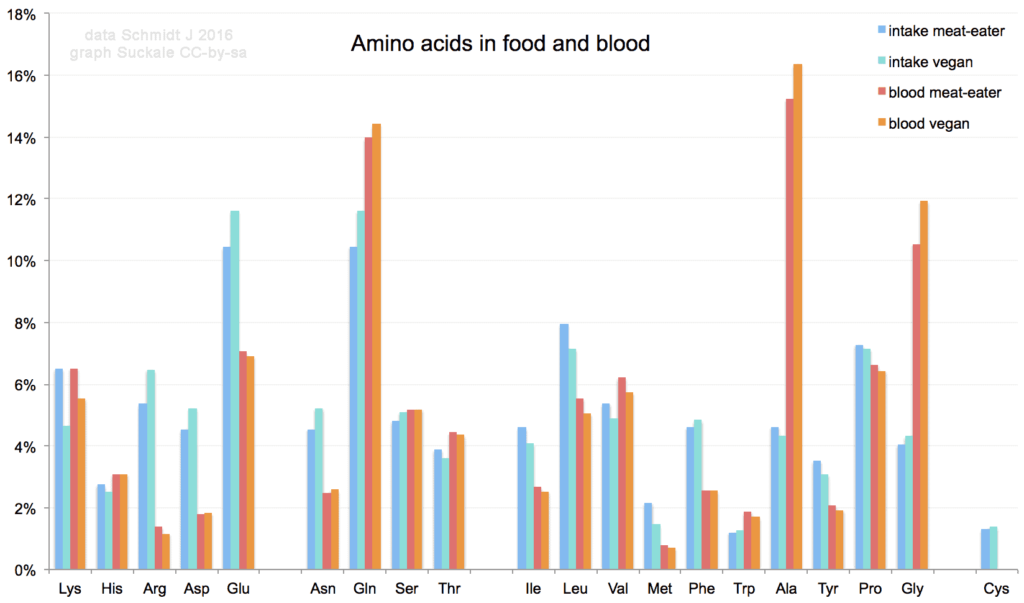 It should be noted that not all research shows beneficial effects of beta-alanine on physical performance. One of the challenges of assessing the research on beta alanine is the differing methodologies used in the assessment of its effects, especially the reliability of the exercise tests or measure employed [11].

The conflicting results might be due to the small numbers of participants in studies or the variability in doses used, duration of supplementation, variable exercise protocol and measurements, and populations studied.

More research is needed to determine the effects of beta-alanine on strength, endurance performance beyond 25 min in duration, and other health-related benefits associated with carnosine1.

Yes, but…. the benefits are small and limited to very specific types of exercise. In saying that, any benefit would be useful for atheletes performing at an elite level.

In fact, the International Society of Sports Nutrition has released a position statement on beta alanine stating [1]:

More evidence documenting the contribution of carnosine in muscle buffering is needed to further identify its role in exercise performance [1].

Not really. Beta-alanine has been shown to reduce neuromuscular fatigue during exercise, however the research looked at supplementation prior to the performance, rather than post-workout.

Not really. Research has shown that acute and chronic ingestion of multi-ingredient pre-workout supplements can contribute to improvements in performance and body composition1. However, it is difficult to attribute this directly to beta-alanine, isolating its effects from all of the other ingredients that may improve performance independently (e.g., caffeine, creatine, etc).

Since it takes at least 2 weeks for beta-alanine supplementation to yield meaningful increases in muscle carnosine content it is questionable whether beta-alanine is the primary ingredient improving performance outcomes [1].

It is also plausible to expect that an improvement in muscle performance (real or perceived) may motivate an individual to train harder, thereby causing muscle growth. But is this is not a direct effect of beta alanine.

Yes. Beta-alanine has been shown to reduce neuromuscular fatigue, particularly in older subjects, and thereby may improve tactical performance.

Yes…. And maybe. Since beta-alanine has been shown to reduce neuromuscular fatigue, particularly in older subjects, researchers are hopeful that these benefits might lower fall risk, but it’s too early to know that for sure.

No. However, given that beta alanine has been shown to reduce neuromuscular fatigue, particularly in older subjects, it is plausible that a male’s overall athletic performance in the bedroom may be improved.

The recommended daily dose is 4 to 6 g of beta-alanine, with a loading period of around 4 weeks of supplementation required to increase carnosine levels. Research has also shown that the supplementation strategy for beta-alanine is important to achieve its effect.

Studies have shown that beta-alanine requires a daily loading dose of 4 to 6 g daily in divided doses of 2 g or less, for a minimum of two weeks (which results in a 20-30 % increase in muscle carnosine concentrations) [13].

However, since the maximal concentration or retention of carnosine in human muscle is not well known, it is impossible to provide information on the ideal loading or maintenance doses [1]. 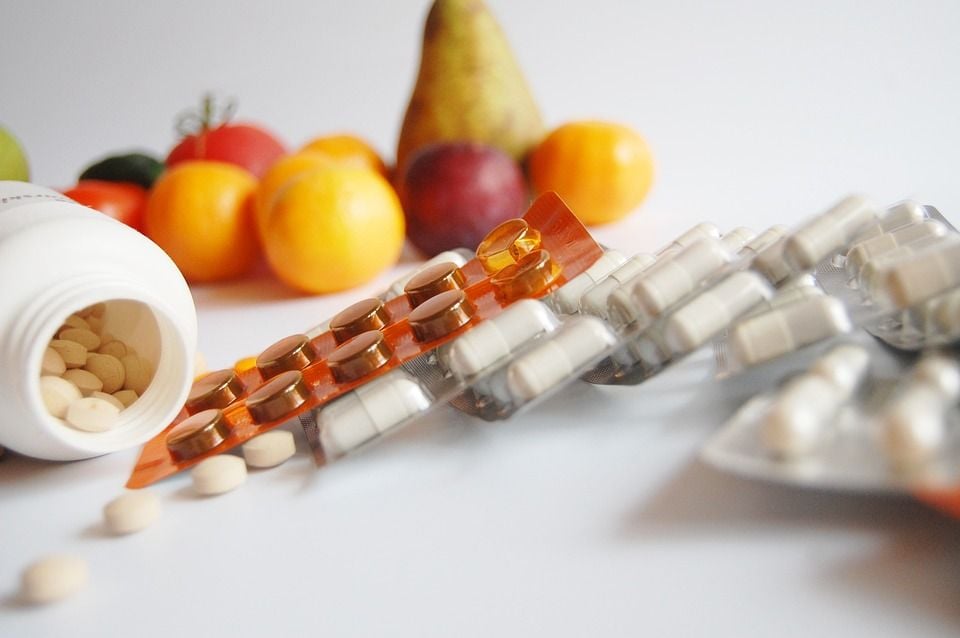 While this is a frequently overlooked question, it shouldn’t be. In fact, I believe it should be the first question asked when considering any supplement, even before assessing its efficacy.

Obviously there are a lot of people who are interested in beta alanine supplementation to improve their athletic performance, but this should never come at a cost of safety.

There is currently not enough reliable information about the safety of taking beta-alanine if you are pregnant or breastfeeding. Stay on the safe side and avoid use- I would add that one would be better off maintaining cardiovascular and strength training within doctor- specified levels and not taking unnecessary supplements anyway.

There is a need for long-term safety data on beta-alanine supplementation as well as more information on potential benefits in special populations such as elderly and tactical athletes [1].

What Are The Side Effects Of Beta Alanine?

The paraesthesia side effect is typically experienced in the face, neck, and back of hands, and is not experienced by all individuals1. To date, there is no evidence to support that this tingling is harmful in any way.

Interestingly, studies indicate that paraesthesia is dose-dependent, with higher doses resulting in greater side effects and can be avoided by using divided lower doses (1.6 g) or using a sustained-release formula, which essentially means that the dose is delivered over a space of time and not all at once [1].

Beta-alanine’s benefit lies in improving muscle endurance. Its effects are clearly beneficial but–like all supplements–isn’t a miracle molecule that is going to turn a couch potato into a super-athlete.

Beta-alanine supplementation has been consistently shown to increase muscle carnosine concentrations [4],[9] in in a variety of populations. It has been shown to provide a minor improvement in endurance (of 2.85%), limited to exercise duration lasting between one and four minutes of high-intensity exercise, short duration strength and power sports, such as Cross-fit or weight lifting10.

It showed no benefit on exercise lasting less than a minute and weak and mixed benefit for exercise longer than 4 minutes [11].

In summary- the benefits of beta alanine are small and limited to very specific types of exercise. Is a 2.85% improvement in exercise performance worth shelling out cash for? It depends on your view of the world. For an elite athlete, looking for an edge, sure. But for me, no.