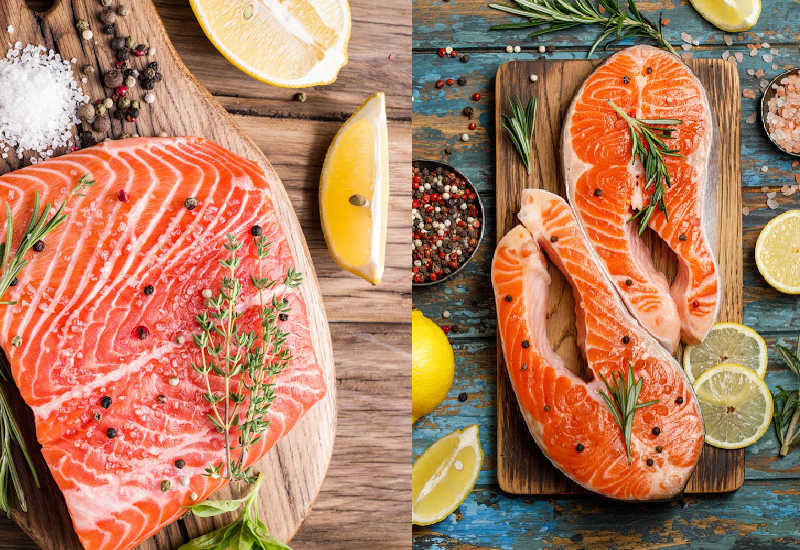 At a glance, the Arctic char and salmon look fairly similar and you could be forgiven for mistaking them. They are both salmonids that are predatory and they're both great served up on a plate for dinner. But these two fish are quite different and we're about to find out why. Let's dive in and take a look at how these two fish differ in looks, taste, habitat, and much more.

What is the difference between an Arctic char and a salmon?

An Arctic char is a fish with pink flesh that is rich and flavorful. Its taste is best compared to a salmon or brown trout with fat content that is similar to a sockeye salmon. A salmon fillet looks a lot like Arctic char with its pink flesh; however, it has a stronger flavor and slightly less oil content. Its flesh doesn’t have as finer flakes as a char. Although the skin on both fish is edible, the Arctic char offers a delicate thin skin that is crispy and delicious once cooked.

Salmon and char migrate between the northern parts of North America, Europe, and Russia. Both fish are anadromous which means they can live in both freshwater and seawater. The Arctic char (or charr) enjoy the circumpolar region and are comfortable living much further North than the salmon, in very cold waters.

If you are an angler, the best place to hook a Pacific or Chinook salmon is Alaska, The Great Lakes, and the West coast of Canada. To catch an Arctic char you need to brave colder weather in parts of Russia, Scandinavia, Alaska, or northern Canada.

For those readers that prefer to buy fish from their local fishmonger, you'll find that most of their fish they sell are farmed using sustainable fishing techniques.

Related reading:
Check out our comparison of sardines and anchovies.
Discover how the white perch and white bass differ.
Find out how roe and caviar are different.

An Arctic char will have a different color depending on its habitat, the time of the year, and the species. But, you will often find that they are a dark brown shade with a silver back that has lighter colored spots. Its belly can range from pink, orange, white, to red. A commercially fished Arctic char usually weighs 2-10 pounds while a commercial salmon can weigh up to 12 pounds.

A salmon has a similar appearance to a char and the best way to tell them apart is whether they have spots or not. Salmon will usually have dark spots or none at all, while a char can have pink, white, or red spots on their sides. Arctic char will also have fins with a creamy white edge, which salmon don't have.

The Arctic char is a cross between a salmon and a brown trout with a lovely rich and mild flavor. Its flesh ranges from light pink to a deep red shade and, once cooked, has a firm, fine flake. A salmon’s flavor will vary depending on the species, but in general, the fillets will have less oil and be a little milder. For those that know their salmon, the sockeye species is probably the closest in taste to the Arctic char. 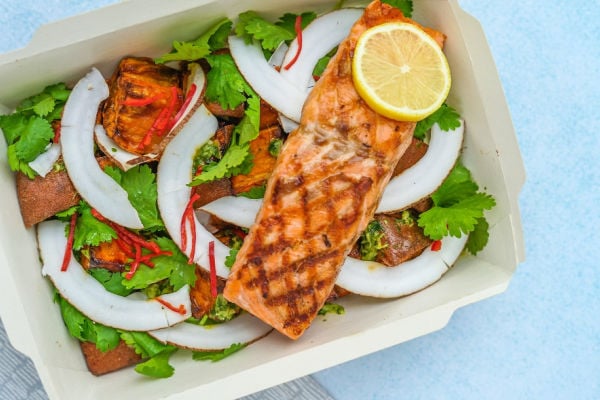 Salmon is a mild fish high in Omega-3 oil.

Cooking in the kitchen with either of these fish is easy, thanks to the high oil content. It means that even if you slightly overcook them, the fish won't dry out as quickly as many other types of seafood. Arctic char is a versatile protein that can be sautéed, broiled, grilled, or baked. Although it is tasty pan-fried with a squeeze of lemon juice, it is also excellent rubbed in spices, cooked in marinara sauce, or a rich buttery sauce. The skin is good fried or broiled and adds a lovely crunchy element to the plate.

For many readers, salmon is a much more common fish to cook with. It can be cooked in much the same way that Arctic char is, and is extremely versatile in the kitchen. Some popular options include cooking it like a steak in the frying pan, tossing cubes into a pasta, mincing it into a potato cake, or adding it as a filling in tacos. The meat is also perfect for using raw in sushi or sashimi.

Arctic char and salmon are both commonly farmed, although there are a small number of wild fish caught as well. Arctic char can live for long periods in freshwater which makes them a much easier fish to farm sustainably. As a comparison, salmon production is roughly 750,000 tonnes per year throughout the world while Arctic char is only 3000 tonnes. Arctic char that is sourced from Canada's Cambridge Bay or from raceways in the United States, Canada, and Ireland are considered the most sustainable options.

Atlantic salmon numbers have reduced significantly since the late 1800s. Factors such as over fishing, dams, and pollution have caused this decline. Sadly, commercial fishing of Atlantic salmon ceased in 1948, in the United States. However, Atlantic salmon and a variety of other species are still farmed. This practice has received unfavorable attention for many years as an unsustainable practice. The issue is that salmon require a lot of wild fish to feed. Although farmers are trialing different types of sustainable feed, the problem is that there is reduced Omega-3 fatty acids in the fish.

Finding salmon at your local supermarket is much easier than Arctic char and this affects the price. Most of the year, salmon will cost a little less than Arctic char. Whichever option you choose, look for fish with bright silvery skin and firm pale pink to dark red flesh. The fish should not have any powerful odors, instead they should have a clean fragrance of the sea.

An infographic comparing the salmon and Arctic char

Salmon and Arctic char are both cold-water fish that are a predatory species. By far the most popular of the two is the salmon, which is farmed in much greater numbers. If you get the opportunity to try Arctic char then we recommend it. This species is closely related to the brown trout and salmon; caught wild or bought from the shop, a fillet of char is one of the best fish on offer. Its inviting mild flavor and firm flakes are delicious and it is an easy choice of fish to cook.

Although a salmon will vary in taste depending on its species, you will generally find that store-bought fillets are milder in flavor. If you're spoiled with the luxury of having both on offer we recommend buying Arctic char because it is the more sustainable option of the two. In the kitchen, whichever option you choose you won't be disappointed.

What is your favorite type of fish to cook? Please let us know in the comments below.