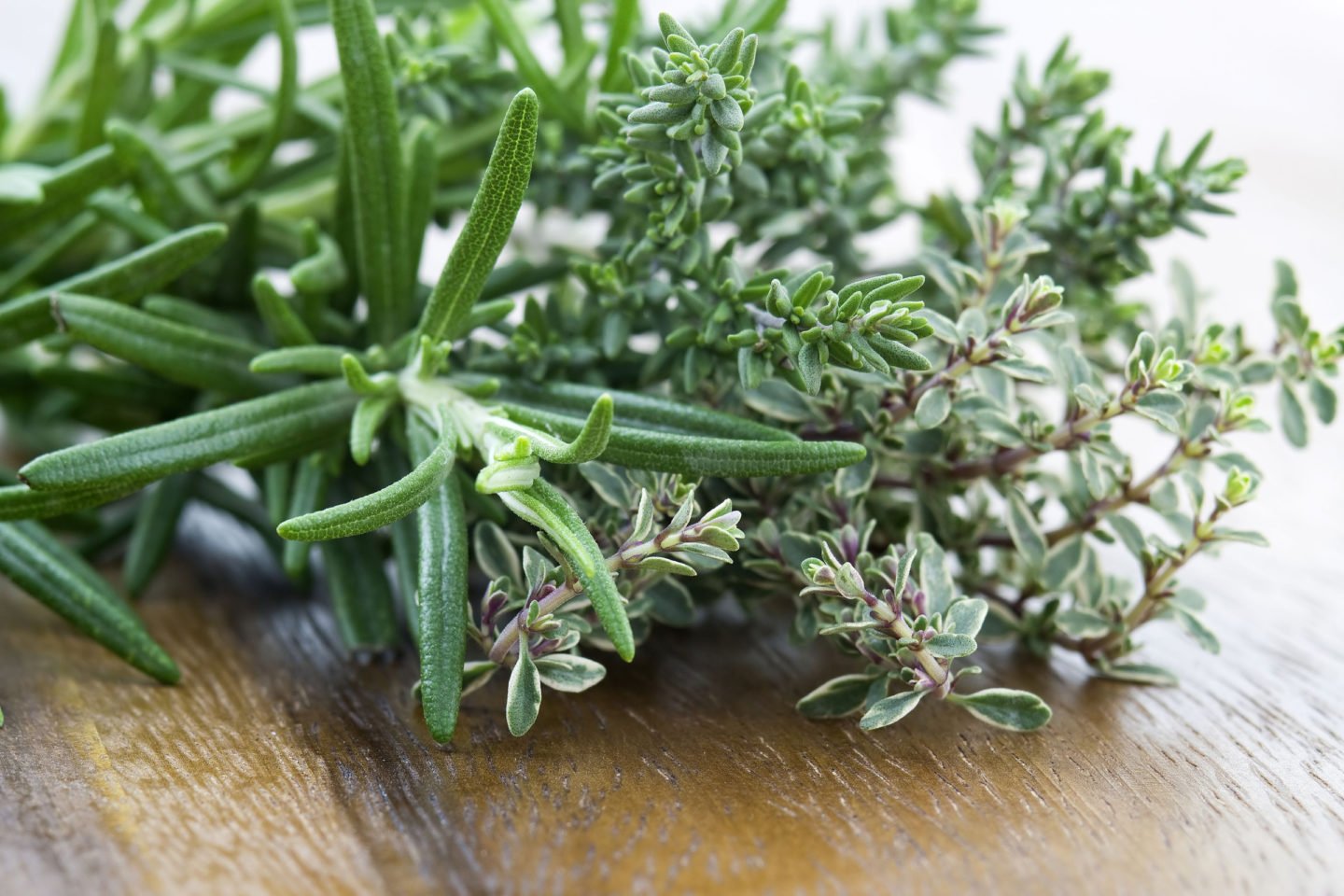 Both thyme and rosemary are culinary staples in cuisines all over the world, and chances are you have some of each sitting on your spice rack right now. However, if you want to use them to their fullest potential in your cooking, it helps to know how they’re alike and different.

The main difference between thyme and rosemary comes down to their flavor. While similar in some ways, thyme is much milder, while rosemary has a strong taste with piney afternotes. Look at our guide to learn more about the other differences between these herbs.

Thyme is an herb that grows on long, delicate stems with clusters of leaves that grow along their length. There are several varieties of thyme, including common thyme, lemon thyme, creeping thyme, wild thyme, and elfin thyme. However, common and lemon thyme are used most commonly in cooking.

Thyme grows relatively easily anywhere with a consistent ground temperature of at least 70 degrees Fahrenheit. They grow between 6 and 12 inches in height and take about 28 days before they are ready to harvest.

Both the leaves and the tender stems can be eaten. However, the stems get more woody and fibrous near the base and should be discarded.

When growing, thyme appears almost like miniature vines, with tiny leaves each about the size of a grain of rice. The leaves are a lighter, warmer shade of green than many other herbs. They have a rounded shape and are soft between the fingers.

Common thyme has a distinct herbal flavor, with notes of wood, grass, and flowers. It is milder than herbs like oregano or basil, making it a good match for fish and poultry.

Lemon thyme is similar to the more common variety but has a bright, citrusy flavor and grassy notes.

When cooking with fresh thyme, the leaves are usually removed from the stem and added during cooking. They can be added at any stage, although the longer they are left to simmer, the stronger the flavor they will have. The whole thyme can be used, along with the stem, though it has to be taken out before serving.

Thyme is commonly used in dishes worldwide, including cuisines from Europe, the Mediterranean, Latin America, the Caribbean Islands, and Africa. For example, in French cooking, it is an essential part of the bouquet garni, which is a spice blend used to flavor various dishes.

Rosemary is a needle-shaped evergreen herb that is a cousin of mint. It has had a variety of culinary and medicinal uses throughout history.

Just like thyme, it can be found fresh or dried. In either case, it must be crushed to access its full flavor.

If you see rosemary growing outdoors, you aren’t likely to mistake it for thyme. While thyme plants only grow a foot or two in height, rosemary can grow much larger, up to three or four feet tall and six feet wide. In addition, their stems are straighter and more rigid, unlike thyme's softer, vine-like stems.

If you’re trying to tell the difference between thyme and rosemary, simply looking at the leaves is the easiest way. While they both grow on woody stalks, the needle-like leaves of rosemary are a darker green, firmer, and pointier, much like evergreen needles. Rosemary leaves are also longer than thyme, growing to nearly 2 inches long as compared to thyme's much smaller ones.

Thyme and rosemary are often paired together. But that doesn’t mean they have similar flavor profiles.

Where thyme is mild, rosemary is quite strong and pungent. If eaten raw, it has a slightly bitter taste with an aroma reminiscent of pine. Since it is so strong, it is best paired with beef, pork, or dishes with other dominant flavors.

When cooking with rosemary, it is most common to pair it with meat, especially pork, lamb, and beef. However, its strong flavor means that it is best used in moderation. Otherwise, it can overpower a dish.

Just like with thyme, remember to remove the stems from rosemary before cooking. Alternatively, leave the stems on and remove the whole herb from your food before serving.

Can Thyme and Rosemary Substitute for One Another?

Even though rosemary has a much stronger flavor than thyme, they can serve as decent substitutions for one another. They pair with many of the same flavors and add woodsy, savory flavors that go well with meat and other herbs.

However, when substituting these herbs, remember to reduce the amount of rosemary you use by about half. Doing so will compensate for its stronger flavor while still delivering a close match in flavor.

Cooking With Thyme and Rosemary

These two herbs are highly versatile and can be used in various dishes. However, depending on what recipe you have in mind, one or the other might be a better choice.

When choosing an herb pairing for a meat dish, choosing one depends on the protein in question. You'll undoubtedly want to go with thyme for fish, as its more mellow flavor and citrusy notes will pair better with the more subtle flavors.

Rosemary is the better choice when cooking beef, pork, or lamb. It has a stronger flavor that won’t get lost with these meats. If you’re cooking chicken, one or the other can be used, depending on the other flavors in your dish.

Both thyme and rosemary are excellent choices for most soups. In the same way, they pair well with meat. With beef or chicken broth, you can use rosemary or thyme accordingly. They also pair well with vegetable-based soups, especially mushroom soup.

One good way to use some extra thyme or rosemary you’ve grown is to use it to flavor a bottle of olive oil. Simply place a sprig of the herb in the bottle and allow it to sit for a week or two. The next time you use it, the oil will be infused with flavor, making it a great addition to salads.

Herbs like rosemary and thyme have often been used in inventive cocktails to add a fresh, green taste. Both pair well with gin and drinks with lemon, orange, or grapefruit.

How long do fresh herbs last?

As long as they are stored properly, fresh herbs can last up to three weeks after they are picked. To keep them at their freshest, clip the bottoms of their stems and put them in a few inches of water in a mason jar. Be sure to remove any brown leaves you find.

Can you grow thyme and rosemary together?

If you want to save room in your home garden, you can grow thyme and rosemary together. Since they have similar water and light needs, they can be tended to in much the same way without worry.

Can I substitute dried herbs for fresh ones?

Dried herbs can be used in place of fresh ones in most recipes, though you need to change the amount you use. Since dried herbs have a more concentrated flavor, you need to use fewer of them. As a rule of thumb, use one teaspoon of dried herbs for every tablespoon of fresh.

Also, remember that fresh and dried herbs have slightly different flavors. Therefore, it is better to stick with fresh herbs when using them in salads or as a garnish.